In this modern computing era, web browsers play a vital role in a computer user’s life. These tools act as a medium between a user and the internet. There are tens of browsers that are serving such as, Google Chrome, Firefox, Safari, Opera, Microsoft Edge, and so on. Several browsers have marked their place in trending slots, like Firefox, Safari, but Google Chrome outperforms all these.

Google Chrome provides cross-platform support that also strengthens its user’s support, as various operating system users can avail it on their machine. The frequent updating mechanism of Google Chrome also distinguishes it from other browsers. In this piece of writing, we will provide the possible ways to update google chrome on Manjaro Linux.

How to update Google Chrome on Manjaro

The yay in Manjaro is a well-known AUR (Arch User Repository) helper that assists in installing packages from the Arch repository. Several other tools do the same, but yay is recommended and therefore used mostly.

Here you have two options, either you want to update only Google-Chrome or all the packages. Both options are acceptable, and any one of them can be followed to upgrade Google Chrome.

Updating Google Chrome Package: First, you must verify that the installation is performed using yay. The command that is executed below has different purposes that are listed below:

Initially, the command will display whether Google-Chrome is installed or not. After that, hit Enter key to check for any updates. As the output shows, the installed version is the latest, however, if you keep on pressing “Enter“, the system will reinstall Chrome for you: 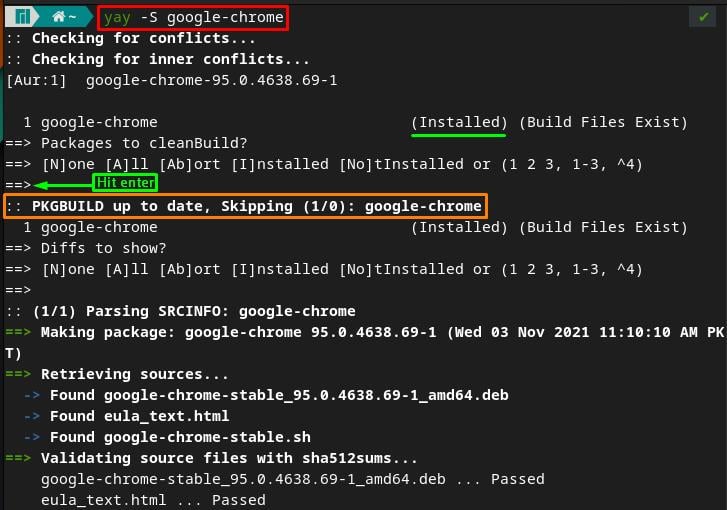 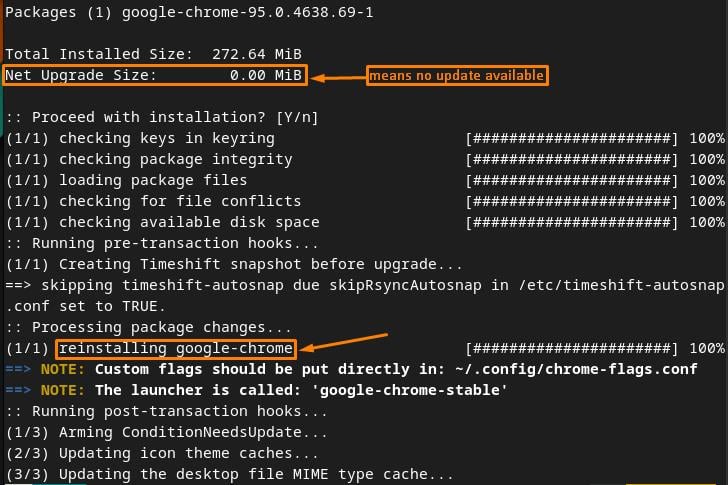 Updating Google Chrome along with all packages: This approach is also supported by yay; the upper edge of this method is that it will upgrade all the packages. However, it is not recommended to follow if you want to upgrade Google Chrome only.

The below-stated command will help you to upgrade all packages installed either using AUR or the official repository. The output of the command shows that there is no pending update in all the libraries of Manjaro’s system.

Method 2: How to upgrade Google Chrome using the git repository

This method will perform an update if Chrome is installed by cloning its git repository. This method requires careful execution of the steps provided below.

If you have installed Chrome using its git repository, you must have cloned it on your machine. Navigate your terminal to that cloned repository on your system.

In my case, I cloned the google-chrome repository in my Home directory. So, I have executed the below-stated command to move to that directory:

Once you are into the directory, you have to perform pull operations on that git repository. The below-mentioned command will make the pull request to fetch the changes from the git repo.

If there are any changes detected, you should execute the following command to make and build those changes.

If the above command (git pull) has prompted that there are no changes observed, then there is no need to execute the “makepkg” command (as in our case). However, if you still run the command, it will reinstall that package, as seen in the image below.

Google Chrome is the most used web browser among internet users and web developers as well. The functionalities like usability and user-friendliness have forced the users to stick with Google Chrome. In this article, you have learned several methods to update Google Chrome on Manjaro Linux. Two possible ways can be adopted to do so: method 1 allows you to update Chrome using yay, and method 2 can be followed to get the latest version from the git repository of Chrome. The users who had installed Chrome using its git repository are recommended to follow method 2. However, if the installation is carried out using yay (an AUR helper), then method 1 better fits in the situation.