Manjaro is an Arch-based distribution of Linux and is equipped with all the basic features that a Linux distro has. Manjaro has extensive support to get packages either from its official repository or from AUR (Arch User Repository). The update of packages is recommended to carry out, as they bring new features, security patches, and bug fixes.

Following the importance of the package update, we will demonstrate the possible ways to get packages updated on Manjaro Linux.

How to update packages in Manjaro Linux

The update in Manjaro can be performed either in two ways:

The terminal support of Manjaro is quite effective in updating the system. Manjaro allows you to get the packages updated in two ways.

Update all packages : Open the terminal of Manjaro and use the following command to update your packages. The command written below contains three options and each option has a specific task to perform. The operations associated with each flag are described below.

It is observed that only one “firefox” needs to be updated as the database has encountered a newer version than the installed one. 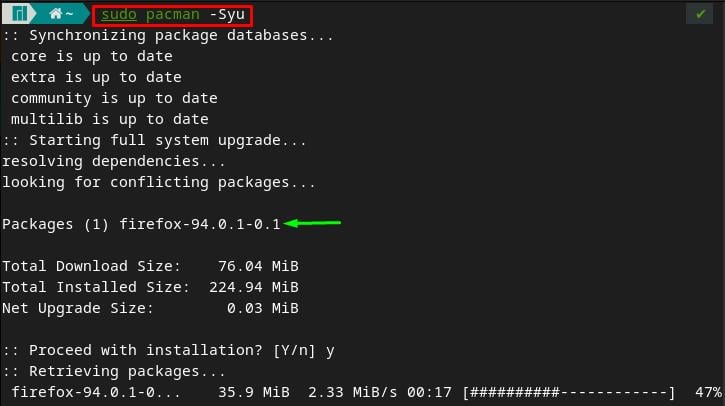 The extra “y” flag inthe command forces the system to download the database irrespective of the updates. This means if there are no updates, the download will be performed to provide you with the latest available versions of the packages present on the database.

Note: This command is recommended only if you are getting errors. Otherwise, it will take more time than -Syu.

How to update packages in Manjaro using an AUR helper

What if you have installed the package using AUR? It is foreseen that you may not get all packages from the official repository of Manjaro. In this case, you have to look for that package in AUR(Arch Linux Repository). The AUR packages are not included in the packages database of Manjaro. So, Pacman will not update the packages that are installed from AUR.

It is recommended to use any AUR helper to update your packages that were obtained from AUR. Interestingly, the AUR helper also updates the packages installed from the official repository of Manjaro. For instance, the following command will update the packages with the help of yay(An AUR helper).

As it can be seen in the output currently all the available packages in the distribution are up to date.

How to update packages using Graphical Interface of Manjaro

Manjaro comes with three desktop environments, they are KDE, Xfce, and GNOME. You may feel differences in the interface of these environments, but all these have the same settings and options to manage Manjaro. This guide shows the updating procedure in the GNOME environment:

Step 1: Click on the “Show Application” icon placed on the desktop. You will find plenty of icons related to the settings of Manjaro. You have to click on the “Add/Remove Software” option that is responsible for managing the packages of Manjaro.

Step 2 : After clicking on that, you will find three tabs. Navigate to the “Updates” section.

Step 3 : The time you click on “Updates“, you will observe that system has started looking for updates.

Step 4 : In our case, the system is up to date. However, one can perform a counter check on the updates by clicking on the “Refresh” icon. 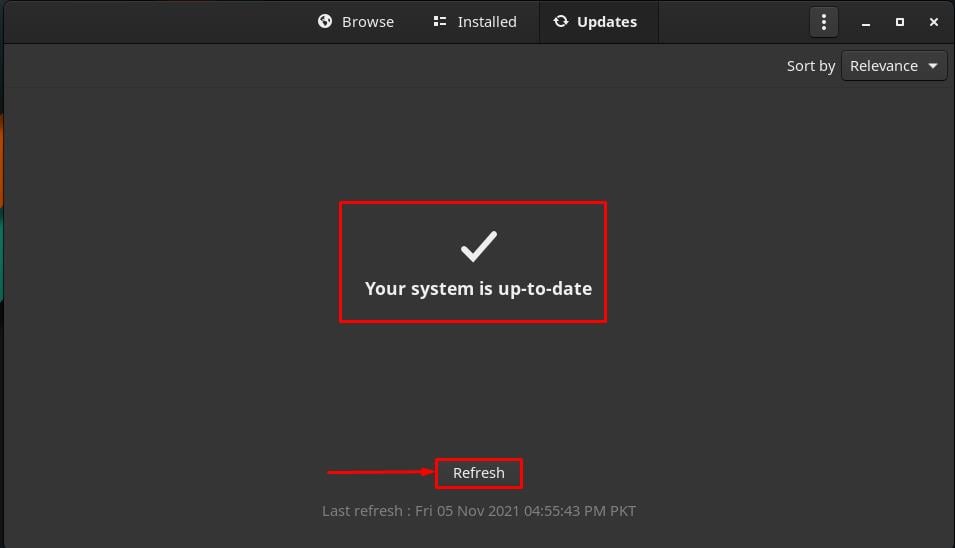 Manjaro provides extensive support to install Software; for instance, you can use the official support of Manjaro for installing packages and AUR as well. The Pacman is practiced managing official packages whereas several AUR helpers (yay, pamac) can be used to manage packages of AUR. In this post, you have learned about updating packages either they are installed from official or unofficial(AUR) repositories. Although AUR helper tends to update packages of official as well as unofficial repositories, it is recommended to update the official packages first and then use an AUR helper to update AUR packages.