Google Chrome is a widely cross-platform browsing engine. The usability and extensive feature list of Chrome attracts the users, and therefore a large community of people is using it as their primary web browser. Although it consumes more resources than any other browser, the functionalities provided by Chrome nullify the resource consumption.

Manjaro, along with most of the other Linux distributions, is equipped with Firefox as a default browser. Since Google Chrome is not open-source, therefore it does not ship with Linux distros. However, you can install it by using the repositories that are supported by several distros.

In this guide, we will demonstrate the possible ways to install Google Chrome on Manjaro distribution.

How to install Google Chrome on Manjaro

As mentioned earlier, Google Chrome is not open source, so you will not find it on the package manager of Manjaro.

You can get Google Chrome on Manjaro via two main approaches:

There are multiple AUR(Arch User Repository) helpers available that can be used to get Google Chrome, such as yay, pakku, and aurutils. On the other hand, you can get the git repository of Google Chrome from AUR to install Google Chrome on Manjaro.

The upcoming sections of this guide will discuss both methods in detail.

The following list of prerequisites must be present on your Manjaro to process the installation methods.

To avail of this, execute the following command in Manjaro’s terminal: 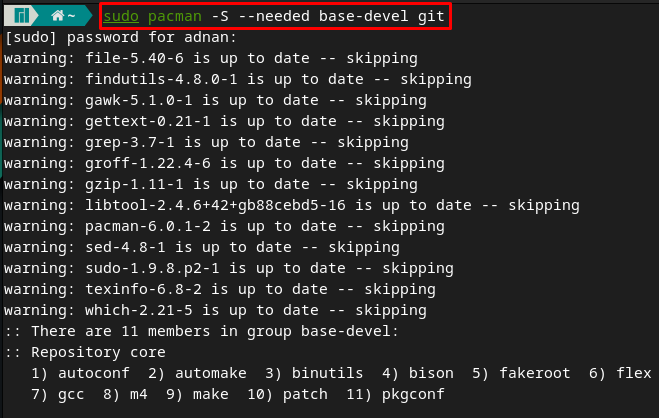 This method comprises several steps that lead to the installation of Google Chrome. Open the Manjaro terminal:

Firstly, clone the git repository of yay by executing the below-mentioned command:

After cloning, change your terminal’s working directory to “yay“, with the help of the following command:

Now, compile and build the yay package with the help of the command provided below. While executing this command: 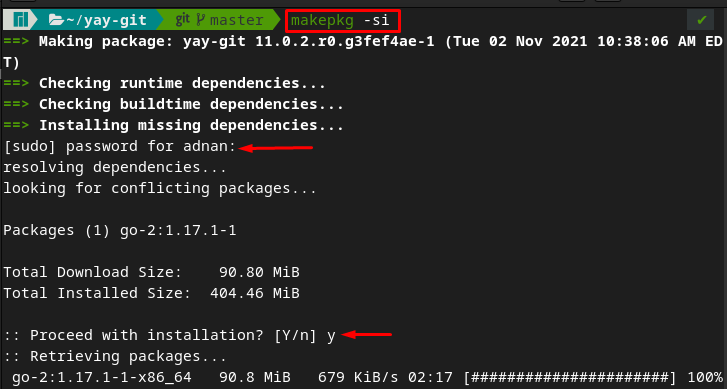 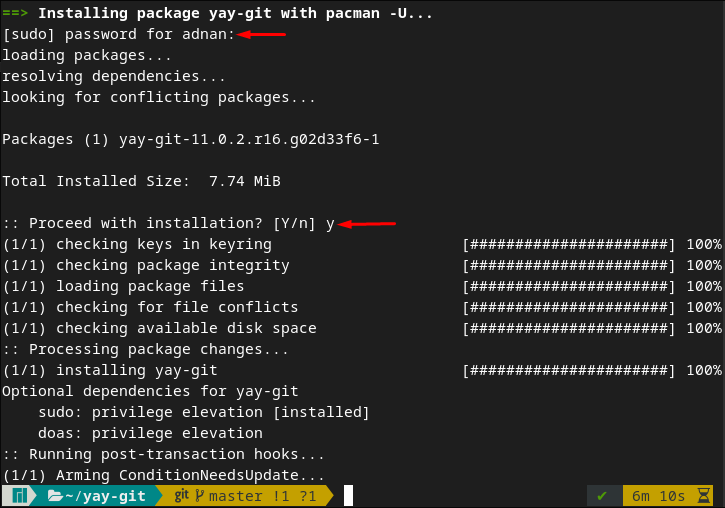 Once you have completed the installation of yay, you are now ready to go for Chrome’s installation. To install yay, execute the following command. You will be prompted with several builds of Chrome that are available. 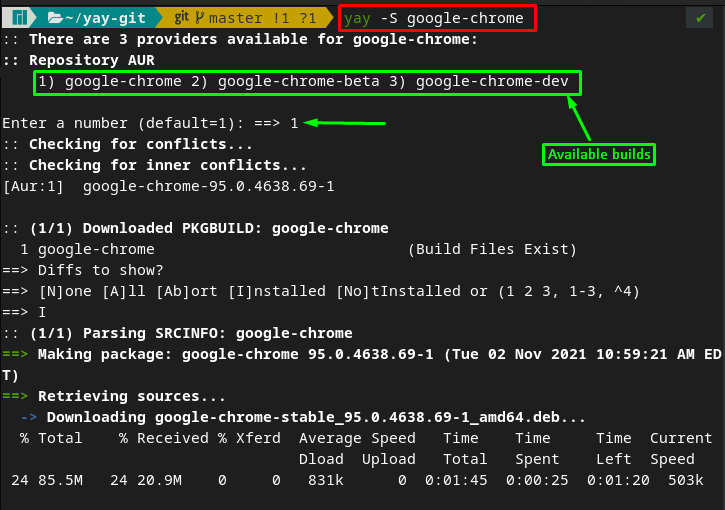 You can trace the installed Google-Chrome easily, and we have provided the ways to do so in two layouts.

Locating Google Chrome in “Traditional” layout: Click on the “Manjaro’s” icon placed at the taskbar. After that, search for google chrome in the search box, and you will find Chrome. 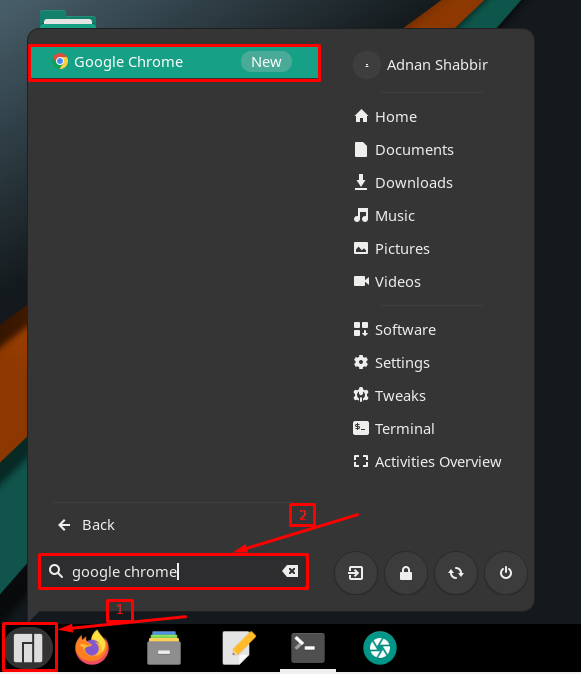 Locating Google Chrome in the “Manjaro Legacy” layout: Click on the “Show Applications” icon placed on the desktop. Once the applications are shown, you will find Chrome easily, as shown in the image below: 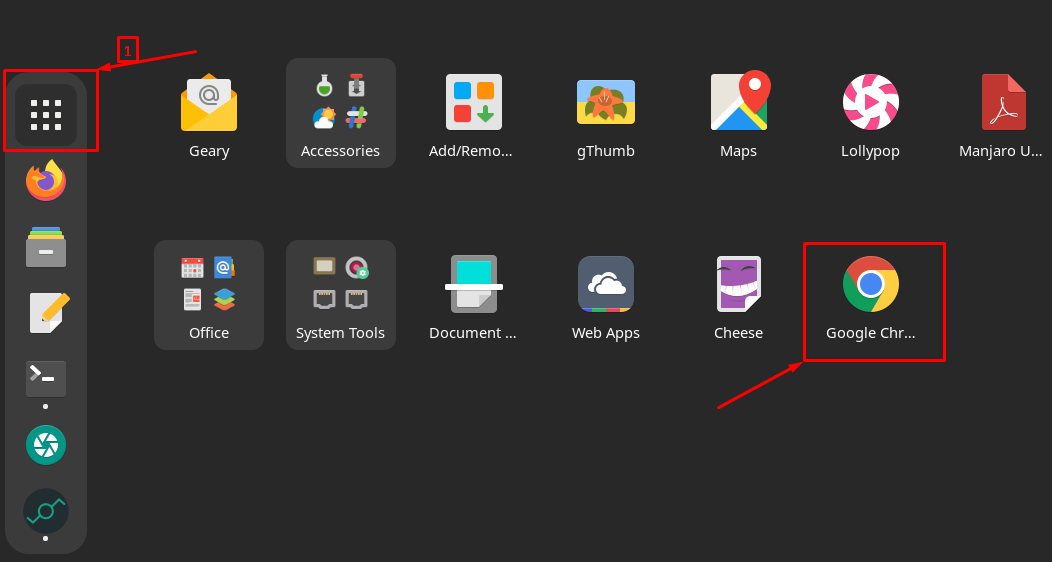 This method is quite simple and easy to perform. The following steps must be carried out carefully for a successful installation.

As we have installed base-devel along with git. Now, you can clone the git repositories using the git clone command. We have cloned the git repository of google chrome with the help of the below-mentioned command:

Now, execute the following command to change the working directory to “google-chrome“:

Once you are into the directory, as mentioned earlier, you can execute the following command to download and install google chrome.

The command will first download and extract the files to complete the making process, and then it will install “Google Chrome“. 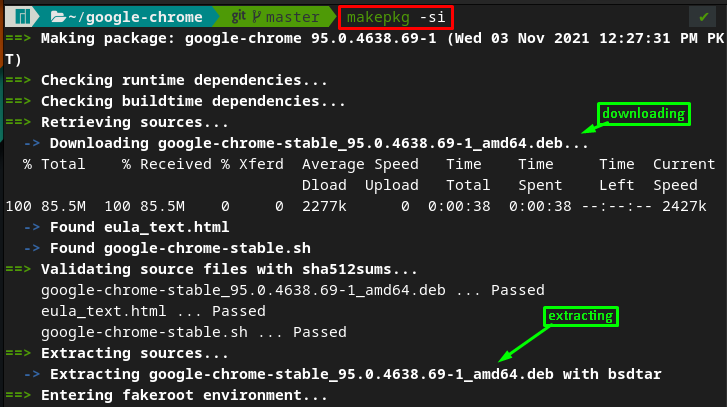 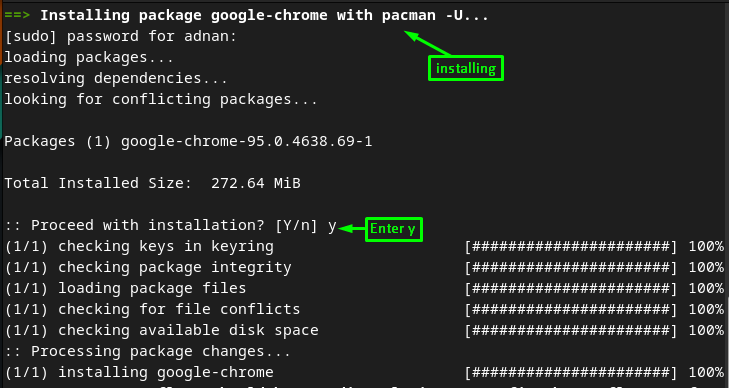 How to uninstall Google Chrome from Manjaro

Google Chrome is undoubtedly a robust web browser, but still, it is a resource-intensive program. It is foreseen that the old machines cannot provide an effective resource management system.So, in this case, you may think of removing/uninstalling Chrome from your system. Here we will guide you to uninstall Chrome from Manjaro. To do so, you must execute the following command:

In this technologically rich era, the web browser is a valuable tool to consider, either in computing machines or cellular devices. Google Chrome is one of the well-equipped and user-friendly browsers. However, it has the best features to serve, and therefore Chrome is the most used and loved compared to its competitors. Following its importance, this guide demonstrates the installation of Google Chrome on Manjaro. You have learned two different ways of getting the Chrome on Manjaro; method 1 explains the process using AUR helper, whereas method 2 can be followed to access the git repository of Google Chrome for installation.