The Linux landscape is dominated by a small handful of venerable distributions, most of which have been around for what seems like ages, each with its own dedicated following of users willing to draw blood in its defense. But if you zoom in, you’ll be able to notice that for each major Linux distribution, there are hundreds of smaller derivates.

While most derivatives of major Linux distributions are utterly irrelevant, some manage to rise to prominence and sometimes even join the ranks of such prominent distributions like Debian, Fedora, Arch Linux, or Slackware.

When Ubuntu was first released, it was dismissed by many as yet another Debian clone. However, the distribution proved its critics wrong, and it now has a seat in the Linux hall of fame. Now, a relatively unknown Ubuntu derivative is attempting to follow in Ubuntu’s footsteps, and the entire Linux community is starting to pay attention, which is why we think it’s the right time to compare the two distributions to see if the student can defeat the master.

Ubuntu has been around since 2004, and it’s now one of the most popular Linux distributions in the world. What started as a more user-friendly Debian derivative is now a parent distribution to many smaller projects, including Zorin OS.

By following its philosophy of ubuntu, which translates as “humanity to others,” Ubuntu has greatly popularized Linux as a desktop operating system, and it also demonstrated its commercial viability with its optional infrastructure support and security services.

What Is Zorin OS?

Don’t feel bad if you’ve never heard of Zorin OS. Even though this Ubuntu derivative was first released in 2009, it’s still nowhere as popular as Ubuntu, but that seems to be changing quickly. In 2010, Zorin OS ranked 41st on DistroWatch. Right now, Zorin OS occupies the 10th place (Ubuntu is 5th).

According to its website, Zorin OS is designed to make your computer faster, more powerful, secure, and privacy respecting. The distribution aims to achieve this by combining the solid foundation provided by Ubuntu with a simplified desktop experience that takes the best from Windows, macOS, and Gnome.

Many members of the Linux community are afraid to admit that the Windows desktop experience is actually quite amazing. From being able to effortlessly pin the most used programs to the taskbar to being able to do just about anything using the mouse alone, there are many good reasons why Windows is able to satisfy the needs of casual users and professionals alike.

Ubuntu has always believed that it can provide a better desktop experience than Windows, but the results have been a hit or miss. Right now, the distribution relies on a slightly tweaked version of GNOME Shell, which is styled to match the look and feel of Ubuntu’s previous desktop environment, Unity.

The version 15 of Zorin OS brings several handy desktop features, such as a new touch mode, which is intended to make the distribution easier to use on tablets and 2-in-1 laptops. There’s also and dark mode, whose purpose is to make Zorin OS easier on your eyes, and a new GTK theme with wallpapers that change based on what time it is

Both Zorin OS and Ubuntu support .deb packages, the software package format for the Linux distribution Debian and its derivatives. Ubuntu users can install new software using the GNOME Software utility, while Zorin OS users can use the built-in Software store.

GNOME Software utility and the Software store are easy to use, making application discovery effortless and automatically handling software updates. In addition to .deb packages, Zorin OS and Ubuntu alike support Flatpak technology, which is based on containers and allows developers to create just one app and distribute it to the entire Linux desktop market.

Pre-installed in the latest version of Zorin OS is an application called Zorin Connect, which provides integration with Android smartphones and includes features such as media sharing, file transfers between phone and PC, smartphone notifications on the desktop, and others. Since the application is based on GSConnect, Ubuntu users can enjoy the same features as well, but they have to work harder for it.

Zorin OS gives Linux gamers a number of reasons to choose it over Ubuntu. To start with, you can install proprietary Nvidia graphics card drivers during the installation with a single click, which certainly beats the procedure to install proprietary Nvidia GPU drivers on Ubuntu. Installing Steam or Lutris in Zorin OS is a breeze as well because the distribution automatically pulls all the necessary dependencies, so there’s not much left for the user to do.

Since Zorin OS is based on Ubuntu, you might expect it to have the exact same system requirements, but they are actually more modest.

When tested on the same computer with an Intel i5 processor, 8 GB of RAM, and a 256 GB SSD, both Ubuntu and Zorin OS felt responsive and stable. The situation changed slightly in favor of Zorin OS when we tested the two distributions in a virtual machine with considerably more limited resources. Zorin OS could really be a perfect operating system for breathing new life into old computers.

Zorin OS is currently available in three major editions: Lite, Core, and Ultimate. Both Zorin OS Lite and Core are available for free, but the Ultimate edition costs €39 (about $43). The table below explains the differences between the three editions. 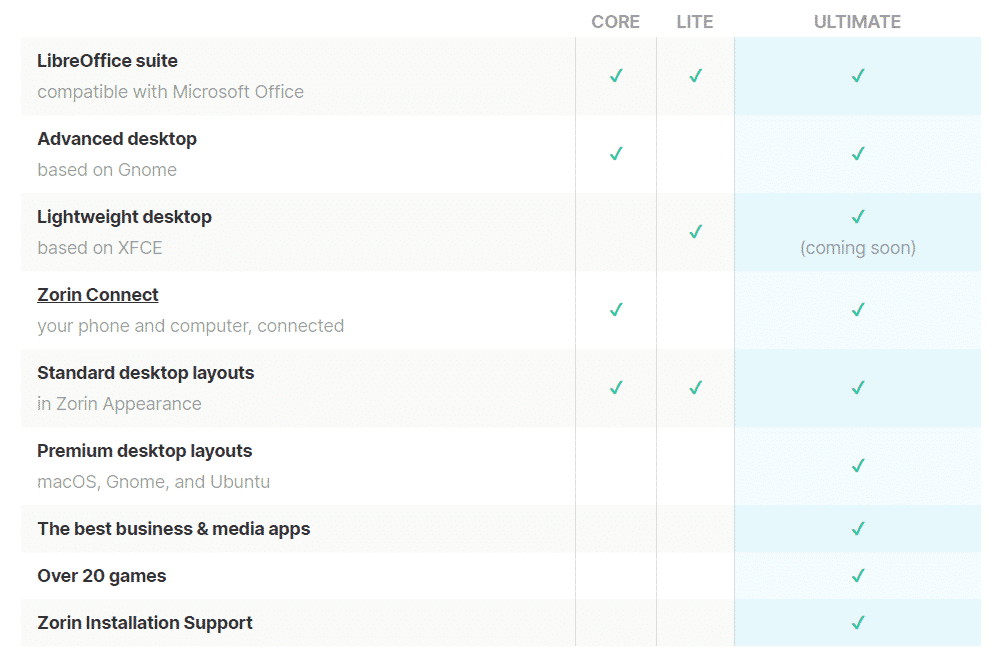 As you can see, the Core edition is essentially the standard version of Zorin OS. The Lite edition uses Xfce as its desktop environment to perform better on older computers, and it doesn’t come with Zorin Connect, which requires the GNOME Shell to work.

The Ultimate edition comes with several extra features as well as premium installation support. It includes 6 one-click desktop layouts that imitate popular operating systems, additional pre-installed software, and more than 20 pre-installed games. The main purpose of the Ultimate edition is to allow the creators of Zorin OS, Artyom Zorin and his brother Kyrill, to work on their distribution full time, and the extra features are just a thank you to their supporters.

Ubuntu, and all of its editions, are available for free, but enterprises can pay for Ubuntu Advantage, which is a premium subscription service that covers everything from enterprise security to compliance to support. Individuals can help fund Ubuntu by donating money during the download process, but they don’t have to.

It’s almost hard to believe that Zorin OS is mostly developed by just two people because the distribution feels just as mature and polished as Ubuntu in every single way. In fact, Zorin OS rises above Ubuntu when it comes to ease of use, performance, and gaming-friendliness. If you’re looking for a Linux distribution with a familiar Windows-like desktop experience, Zorin OS is a great choice.