Transmission Control Protocol/Internet Protocol is abbreviated as TCP/IP. The TCP/IP model was designed to permit communication over long distances. This model can be used to determine how a system should connect to the internet and how data should be transported across devices in a network. When multiple system networks are connected, it helps in the creation of the virtual network.

TCP/IP Model comprises four layers, each of which has its own set of protocols and functions:

In this post, we will discuss TCP/IP Layers and their functions. 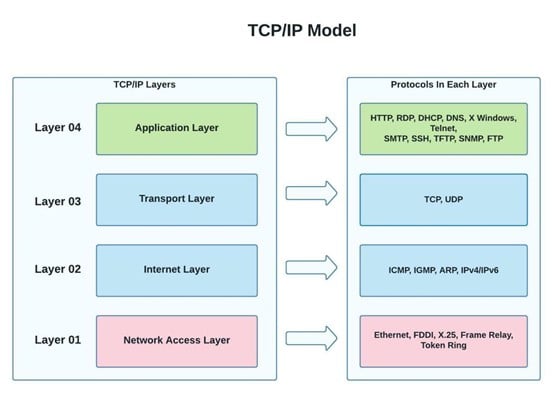 The Network Access Layer defines the mechanism of how data is physically transmitted via the network. It also includes how bits are optically or electrically communicated by hardware devices that directly interact with a network medium, such as twisted-pair copper wire, optical fiber, and coaxial cable. In TCP/IP model, Network Access Layer is the lowermost layer.

Here is the list of some primary functions that the Network Access Layer perform in the TCP/IP Model:

In the TCP/IP model, the Network layer or the Internet layer is the second layer. Data is packed into IP datagrams by the Internet layer, including source and destination address information for forwarding datagrams across networks and between hosts. This layer is present in between Transport and Network Access Layer.

Hosts can insert and deliver to a destination, either on the same or another remote network, using the Internet layer. When there exists an order difference in the data transmission and the received packets, then the task of the higher layers of the TCP/IP model is to restructure them so that they can be delivered to the network applications running at the Application layer.

Functions of the Internet layer

Here is the list of main functions of the Internet layer:

The Transport layer is placed on the Network layer to offer data transmission from a source system process to a destination system process. The Transport layer can be hosted on single or multiple networks, and it also manages service quality functions. In the TCP/IP model, this third layer defines where, when, and how much data should be sent at a specific rate. The messages received from the Application layer are used by the transport layer. It also ensures that data united are transmitted in an error-free and timely manner.

The following are some of the essential functions of Transport Layers:

Now, let’s look at some other functions of the Application layer:

Over the internet, the TCP/IP model is considered as a standard for data communication. It divides communication into data packets to avoid resending the complete message if there is a problem during transmission. TCP/IP splits communication tasks into four layers, allowing the process to be standardized without the need for software and hardware providers to manage it. In this post, we have talked ab\out the TCP/IP layers, their functions, and the protocols used by these layers.