To build a low cost NAS server with Raspberry Pi 3, all you need is:

Now, connect all the required components such as USB thumb drive or USB self-powered hard drive (using a USB hard drive dock), microSD card with Raspbian OS image flashed, Ethernet cable, and micro USB power cable. Finally, power on your Raspberry Pi. Now, connect to your Raspberry Pi via SSH or VNC depending on your preference.

NOTE: Use the username pi and the password that you set while configuring Raspbian for the first time. If you’ve configured Raspberry Pi headless, then the default password is raspberry.

In this article, I will use Samba on Raspberry Pi for file sharing. It allows file sharing using Windows SMB or CIFS protocol. Windows has native support for Samba shares.  Samba is available in the official package repository of Raspberry Pi. So, it is very easy to use. First, open up a Terminal and update the APT package repository cache with the following command:

Samba should be installed.

Usually, it will be available in /dev/sda1.

If you’re unsure, you can find out what it is for you with the following command:

Now, create a directory (let’s call it Media) where you want to mount the USB thumb drive or hard drive with the following command:

Now add the line as marked in the screenshot below at the end of the /etc/fstab file. Once you’re done, save the file with <Ctrl> + x and then press y followed by <Enter>.

NOTE: Here, ext4 is the filesystem format of the USB thumb drive or hard drive you want to mount. It may be different for you. Make sure you put the right filesystem type here.

Now, mount the partition /dev/sda1 to /mnt/Media mount point with the following command:

Your USB thumb drive or hard drive should be mounted in the /mnt/Media mount point as you can see in the screenshot below.

Now, change the owner of the /mnt/Media mount point to pi with the following command:

Now, run the following command to make your existing pi user a Samba user and set a password for the Samba user:

Now, type in a Samba password and press <Enter>.

A Samba user pi should be added.

Finally, restart your Raspberry Pi with the following command:

Now, from your Windows computer, click on Computer tab and then click on Map network drive as marked in the screenshot below.

Now, type in the NAS Folder address, make sure Connect using different credentials is checked. Then, click on Finish. 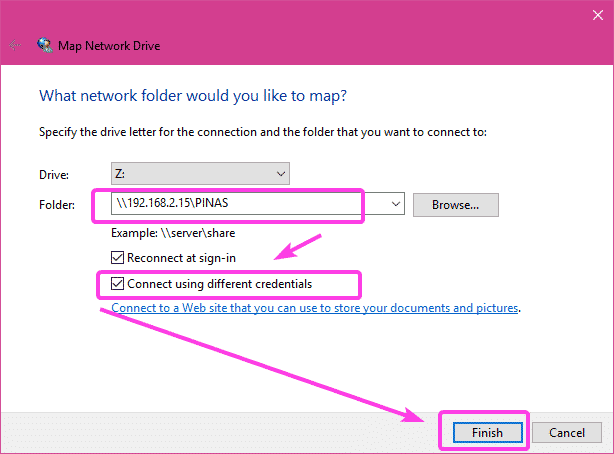 Now, type in the username pi and the Samba password that you set a little while ago for the user pi. Then, click on OK. 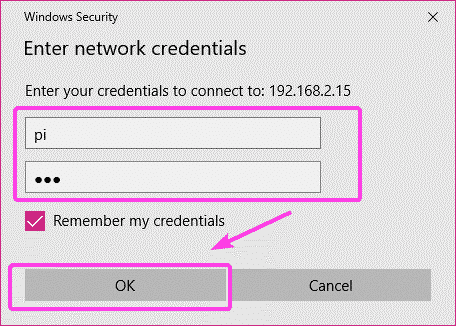 Your NAS storage should be mounted as you can see in the screenshot below.

As you can see, I can copy files to the NAS.

So, that’s how you create a cheap NAS server with Raspberry Pi. Thanks for reading this article.