The LCDs are interfaced with Arduino to display the outputs on the screen of LCD and in this write-up, the method of interfacing the LCD with Arduino Nano has been explained.

How to interface the LCD with Arduino Nano

The rest of the pins are similar to Arduino Uno, now, we will interface the LCD of 16×2 with Arduino Nano, the connection of the pins of Arduino Nano with the LCD will be:

We are not using the D0, D1, D2, and D3 because we are using the 4-data lines so we can connect the RW pin of the LCD with the ground. The circuit diagram of the above connections will be like this: 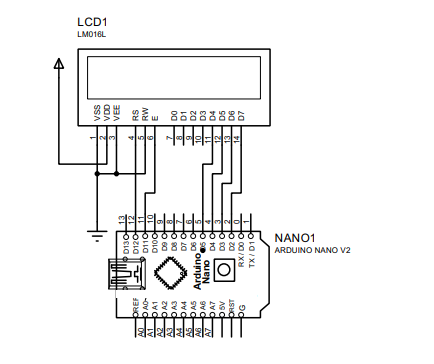 We will simply write a code for displaying “LinuxHint” on the LCD:

Once the code is compiled successfully, we will export the compiled binary so that we can use its hex file in a simulation of Proteus.

The simulation of the circuit using the above Arduino code is:

The LCD is an electronic module that can be interfaced with any board of Arduino to display the output of the code on its screen. There are different types of LCDs, the most commonly used LCD in Arduino projects is 16×2. In this write-up, the method of interfacing the LCD with Arduino Nano is discussed in detail.