Interfacing the 7 segments with Arduino Uno

From the name we can say that this display is further divided into the seven segments used to display the numeric data of the Arduino code. This display is small in size and we can also combine two or more displays if big numeric data is to be displayed. Such a display is feasible in the projects like building a countdown timer, displaying the temperature, number of visitors or displaying the token numbers in the bank or in the hospitals. 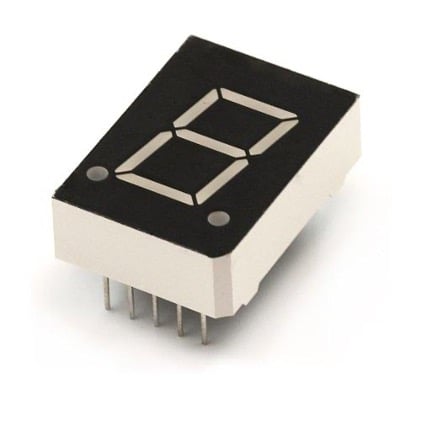 This segment comes in two configurations either common cathode or common anode and There are a total 10 pins of the module seven of which are for each segment of the display. Whereas the two pins are either anode or cathode and we can use any one of them. There is one pin for the dot present on the bottom right of the display which comes handy when the value having decimal is to be displayed.

The pins of the display are taken in the alphabetic order starting from a to g and we have provided the image below that shows the pin configuration of the display: 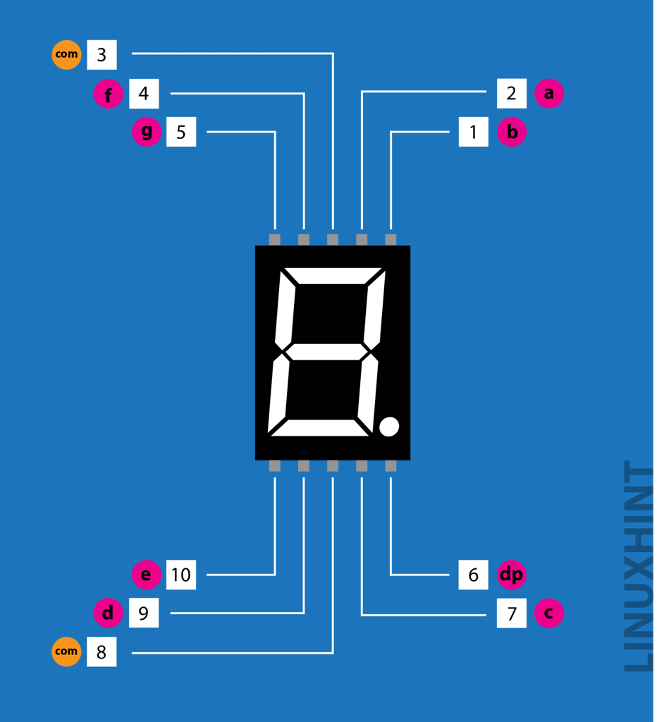 For interfacing the seven-segment display with Arduino we have created a circuit whose schematic is given below: 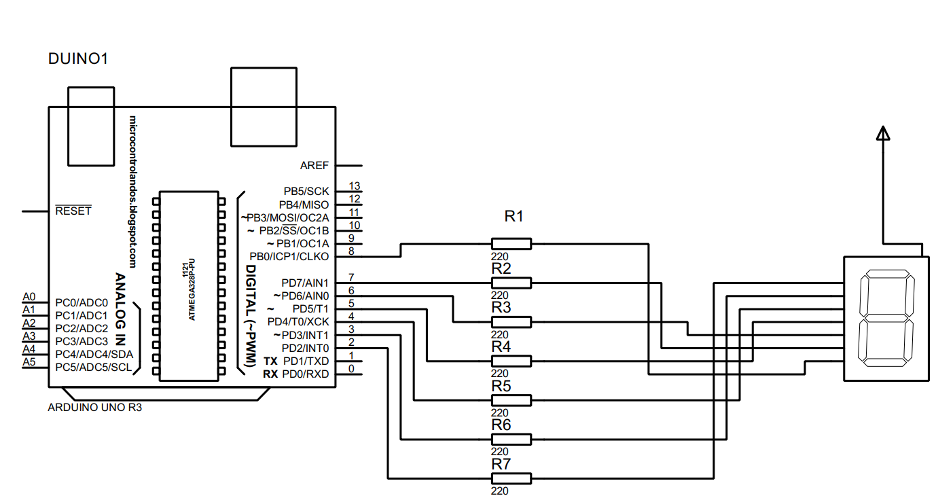 In the schematic we have used the seven-segment having a common anode you can use the other configuration as well. 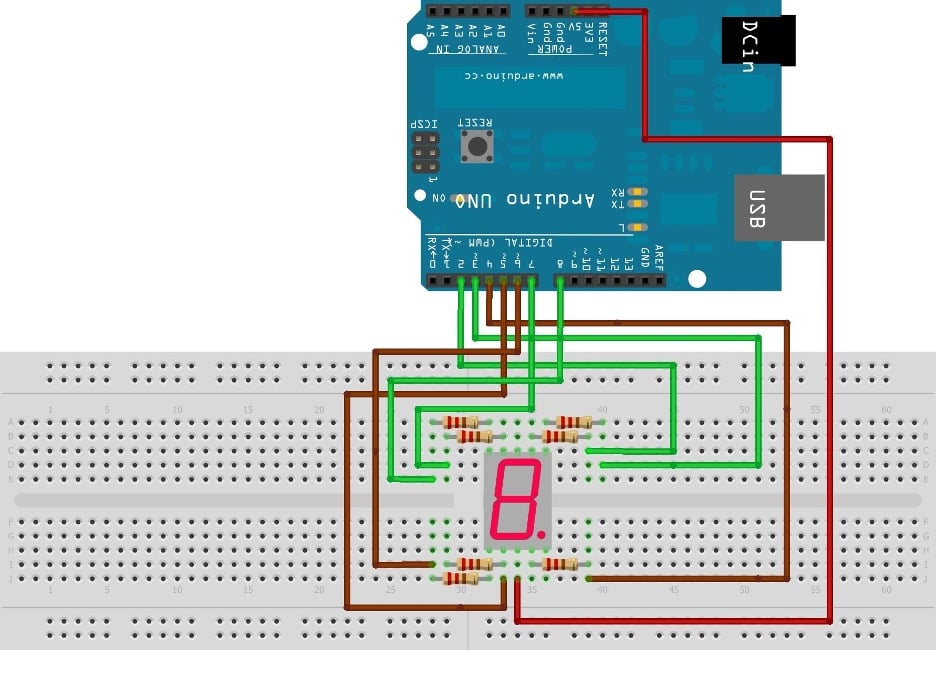 We have provided the image below for the hardware assembly of interfacing the seven-segment with Arduino to give a little bit more detail of the connections:

We have connected  the seven segment display  with Arduino starting from a and going to g. For distinguishing the upper and lower connections we have used different colors for the pins on the top and below.  The green color wires connect the upper pins of the seven segment while the lower pins are connected to the Arduino using the brown pins.

To understand how we can install the library of the seven-segment we have provided the image below which shows the step wise process of installation of seven-segment library: 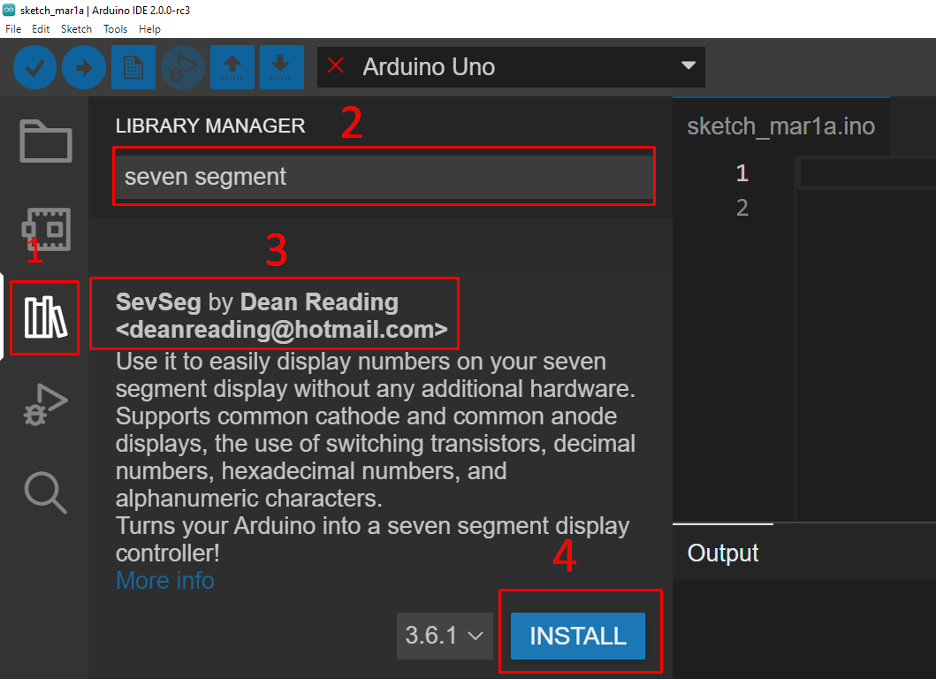 As soon as you click on the install the library will start to install and you will see an icon of installed will appear in front of the name of the library and the installation status will also appear in the output menu of the IDE. It can be seen in the image we posted below: 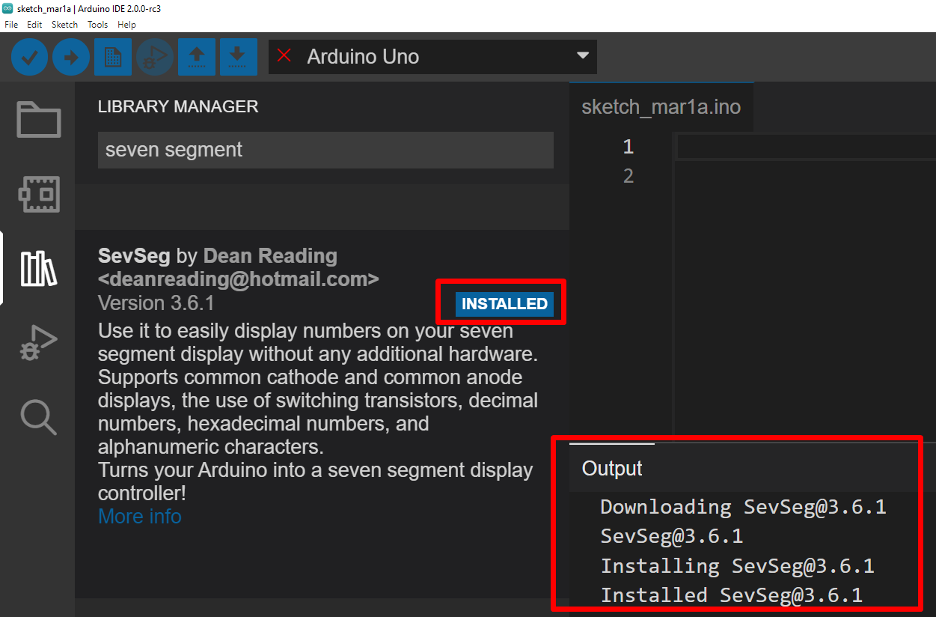 The seven-segment can be interfaced with Arduino Uno by two ways : one by using the specific library for the seven segment and the second is by  giving binaries for each digit we want to display on the seven segment

#include "SevSeg.h"// defining the library for the seven-segment
SevSeg sevseg;// initializing the  variable for seven-segment

void setup()
{
byte sevenSegments = 1;/*defining the number of seven- segments here we are using only one seven-segment */
byte CommonPins[] = {};/* defining the common pins for the seven-segment*/
byte LEDsegmentPins[] = {2, 3, 4, 5, 6, 7, 8 };/* assigning the Arduino pins for each segment from a to g */
bool resistorsOnSegments = true; /*assigning Boolean type to the registers of the seven=segment*/
sevseg.begin(COMMON_ANODE, sevenSegments, CommonPins, LEDsegmentPins, resistorsOnSegments);/* initializing the configuration of the seven-segment */
sevseg.setBrightness(80);// giving the brightness to the seven-segment
}
void loop()
{
for(int i = 0; i < 10; i++)/* generating numbers from 0 to 9 using for loop*/
{
sevseg.setNumber(i);  /*displaying the for loop values on seven-segment*/
sevseg.refreshDisplay(); /* refreshing the seven-segment display after every iteration */
delay(1000); /* time after which the for loop will iterate again*/
}
}

For demonstration purposes we have generated the numbers from 0 to 9 using the for loop in the loop section of the Arduino code and to display the numbers on the seven-segment we have used the sevseg.setNumber() function.

To give the idea how we can interface the seven-segment without using any library we have the respective code below:

To summarize the code we have compiled, we can say that first we have defined the binaries for each number and then we have created the display function  that will return the digit on the seven-segment by using the binaries declared above.

Hardware implementation of interfacing the seven-segments with Arduino Uno

To give the better idea of interfacing the seven-segment with Arduino we have implemented the hardware assembly described above and provided the figure for the hardware implementation  which is given below:

To demonstrate the working of the Arduino code compiled for interfacing the seven-segment with Arduino is given below:

To display the parameters of the Arduino program we have to interface any display with the Arduino board. In the market there are a wide variety of displays available that can be interfaced with Arduino, but it depends on the type and amount of data that is to be displayed. For a limited amount of data and only for displaying the numbers we can use the seven-segment display as they are easy to work with. So we have interfaced the seven-segment display with Arduino Uno in this guide.