Arduino platform provides a variety of the microcontroller boards also known as Arduino boards that come with different specifications. Before using any Arduino board, one must know the specification of the boards and most importantly the pinout of the boards. So, we have explained the pinouts of the Arduino Uno board and the use of each pin in detail.

The most used board among the Arduino family is the Arduino Uno as it is easy to use and suitable for beginner and medium level electronic projects. This board is equipped with an ATMEGA328P microcontroller which belongs to the ATMEL family.

This board can operate on the voltage of 5-volts and has flash memory of 32 kilobytes. Whereas the static RAM of the controller is 2 kilobytes and the EEPROM has memory of 1 kilobyte. The clock speed of the ATMEGA328P is 16 Hz. Below is the image of the Arduino Uno board: 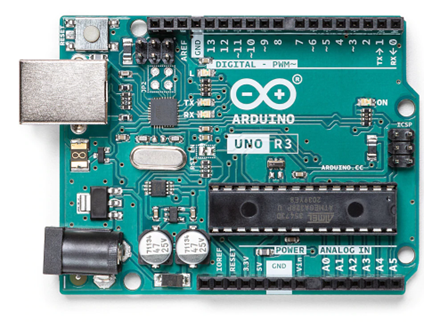 This board also consists of the 12 header pins as well also called In Circuit System Programming (ICSP) pins.They are also used to program the controller We have explained each pin by dividing the pins on different categories based on their usage in the subsequent paragraphs. 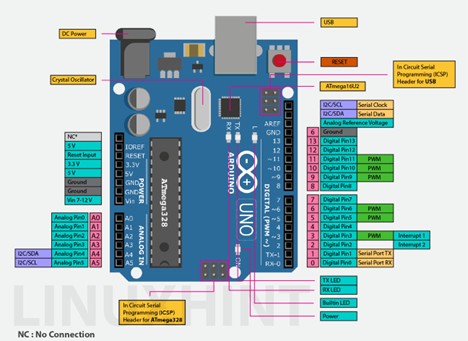 Digital Pins of the Arduino Uno

There are a total of 14 digital pins of the Arduino which can be used for connecting the devices that require digital input from the Arduino Uno and give the digital output. For the digital we mean that the information will be in the form of zero and one.

There is a built-in LED in the Arduino Uno that is connected to pin 13 but we can use this pin to connect other devices as well.

Below we have attached the image of the Arduino Uno in which the digital pins are highlighted in red color. 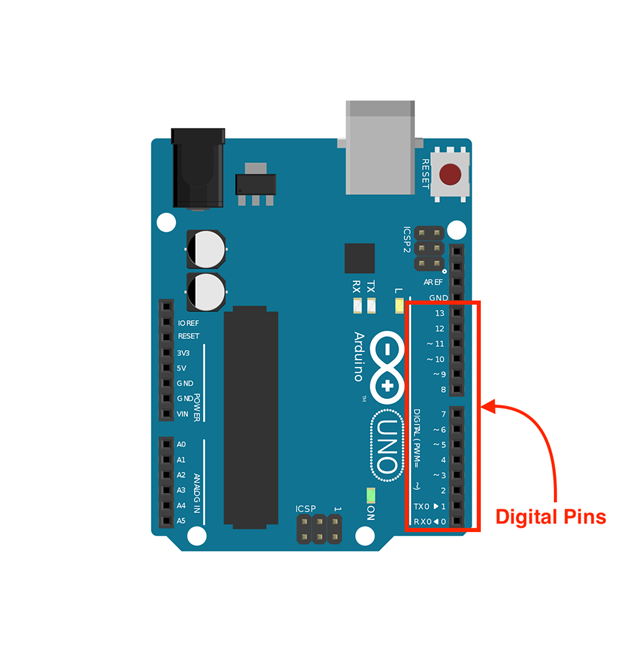 The Arduino Uno has 6 analog pins that are mainly used to connect the analog devices (sensors) and have the resolution of 0 to 1023. This means that the values will be in between 0 and 1023 and in terms of voltage the 5 volts will be 1024 that is 2^10. 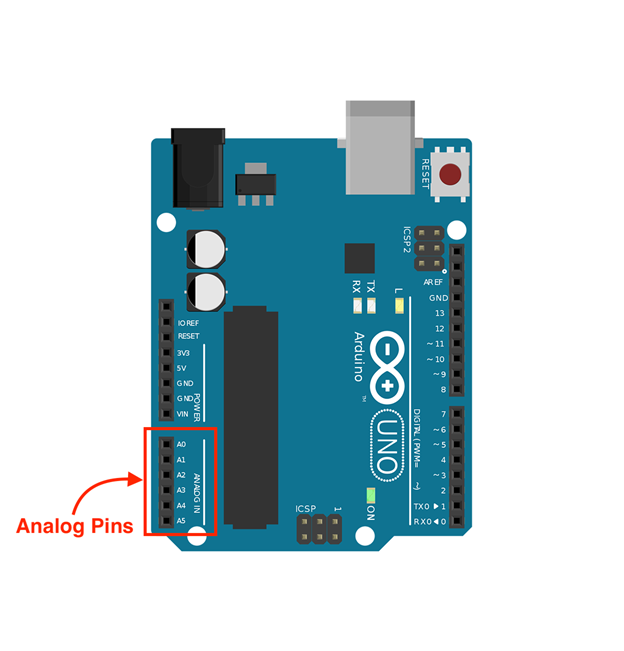 The pins A4 and A5 can be used as the SDA and SCL pins for the devices that used I2C and TWI (Two Wire Interface) communication protocols. The SDA pin is the data line for the connected device and SCL is the clock pin of the connected device. Similarly, there are two other pins next to the AREF pin that can be used for the data line and clock of the I2C devices as well.

The figure attached below shows the analog pins of the Arduino by highlighting it in red. 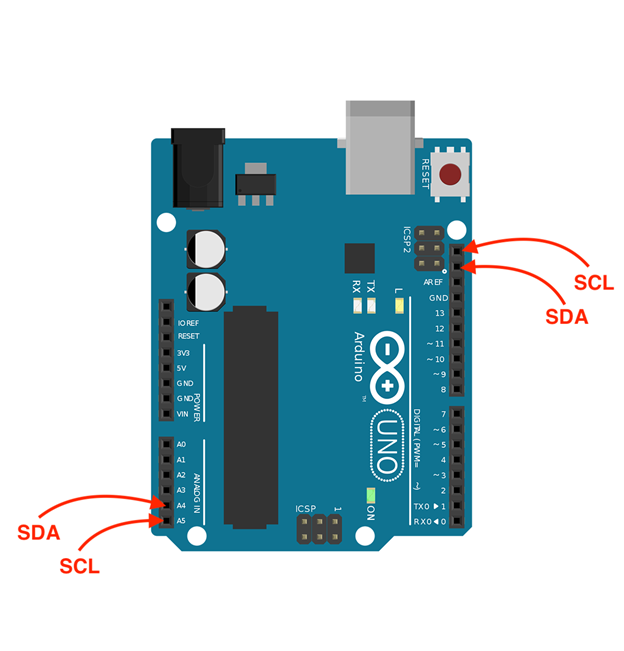 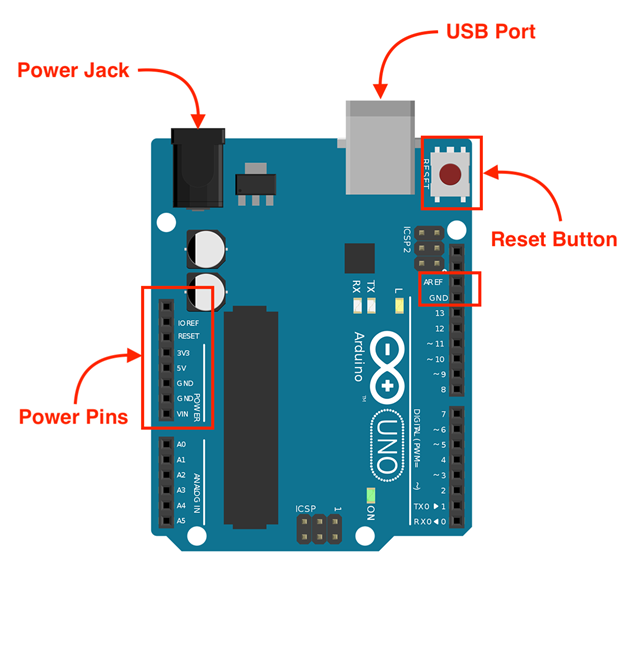 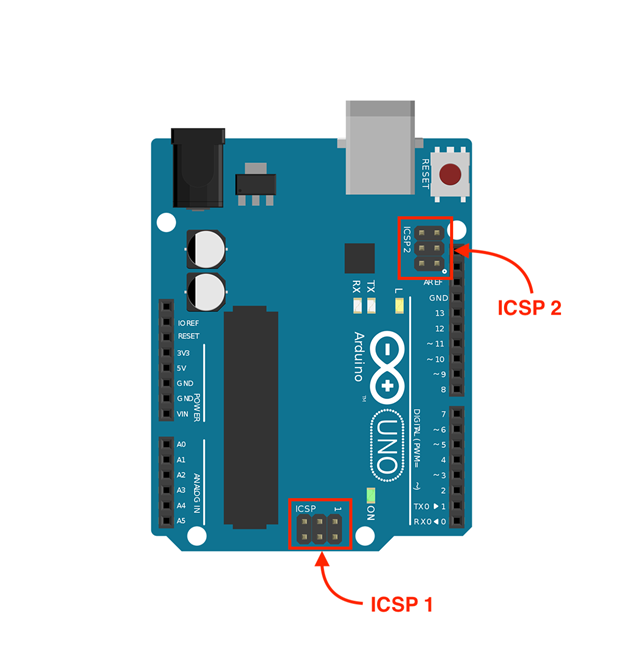 The pins that are used to get the output of the Arduino in the form of pulses are called the PWM pins and its duty cycle varies from 0 to 255. The pins dedicated for PWM in Arduino Uno are 3, 5, 6, 9, 10, and 11. Below the image shows the PWM pins of Arduino Uno highlighted in red. 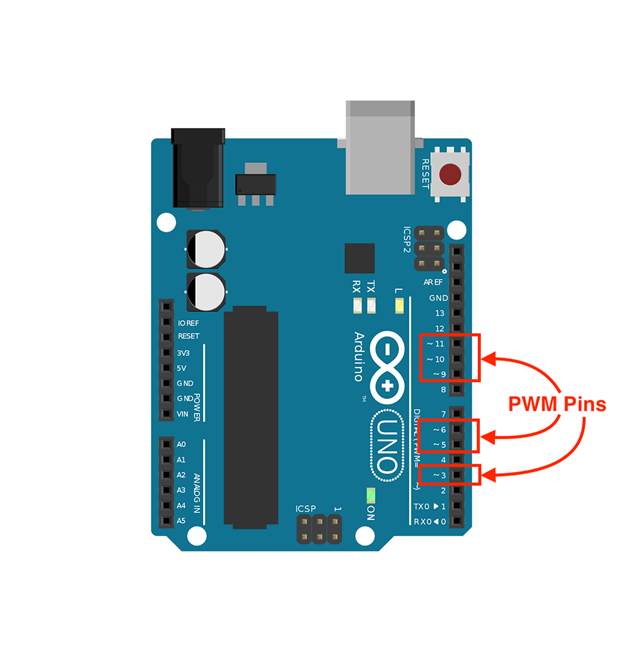 Arduino Uno which is the most popular Arduino board among the students as it can be used in a variety of embedded system projects and is easy to work with. However, to use this board, one must be aware of the board specifications and the pinout of the respective boards so that the board can be used effectively. For ease of the students and learners, we have described the purpose of each pin of the Arduino Uno in a very comprehensive way.