Git is an open-source tool used for the management of source code which is free of cost and can handle small to large coding projects efficiently. It enables multiple users to work together on projects for non-linear development. The source codes developed by one user can be shared with other users to alter them and if any changes are made to the source code, the other users will get a notification of it.

This article presents a detailed guide to easily install Git on a Raspberry Pi system.

Git can be installed on Raspberry Pi from two methods, which are mentioned below:

Git can be installed from the official Raspberry Pi repository using the apt command. To install Git through this method, follow the below-mentioned steps:

Step 1: Update and Upgrade the Repository

Before installing any package or tool from the official repository, it is always recommended to update and upgrade the repository. So, use the update command as mentioned below to first check for packages updates:

Then use the below-given command to upgrade the packages:

Make sure to enter “Y” to continue the upgrading process:

Once the upgrading is completed, move towards step two.

After upgrading, now it is time to install Git from the official repository and for this purpose, use the following command:

That’s it, the installation process is completed. This is the easiest and two steps method to install Git, but the only drawback of this method is that it installs an old version of Git, which is shown below using the version command:

If you want to install the latest version you can opt for the next method.

To go with removing Git from your Raspberry Pi system, do it by running the following command: 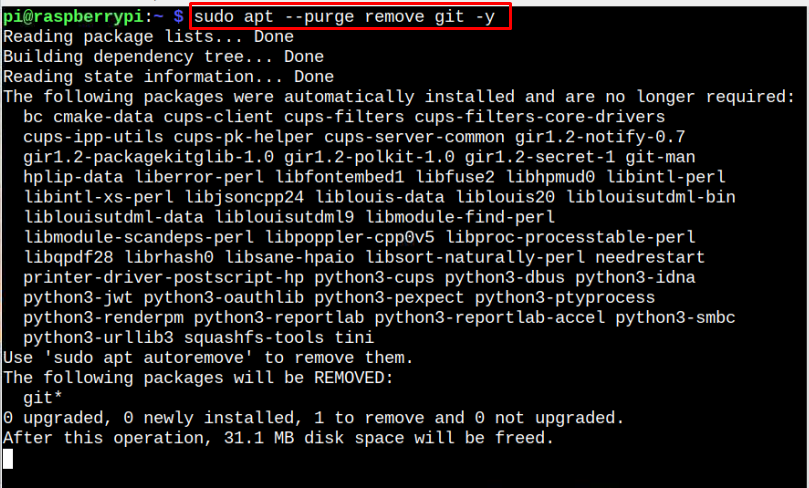 To install the latest updated version of Git, it is preferred to install it from the GitHub source. So, to perform this method, make sure to do the following steps carefully:

Before installing Git from the GitHub source, there are some pre-required dependencies that need to be installed first using the below-mentioned command:

Then download the latest Git tar.gz file from the below-mentioned command:

After downloading, it is now time to extract the file, from the following command:

The downloading and extraction process is completed and it’s now time to set up Git on Raspberry Pi. For that, first, open the Git directory by using the below-mentioned command:

As there are a lot of files, it is going to take some time to compile all of them. Once the compilation of the file is done, follow the below-mentioned command to finally install Git:

Wait once it completes the Git installation.

To find out the installed version of Git, follow the below-mentioned command:

This above command also verifies the installation of Git on the Raspberry Pi system.