Internet intruders can acquire our information; therefore, firewalls safeguard our computers from them. It is sometimes misunderstood as being unnecessary for Linux. The Linux operating system has been rigorously designed to provide optimum security. For example, these include numerous levels of authorization to prevent viruses and malicious software from being installed. Unlike Windows, the Linux system has no open ports by configuration, which means that no external devices or programs may access your machine without opening ports. Furthermore, because Linux is the least common operating system, viruses and spyware designed for it are extremely rare. Cyber attackers will find it nearly unprofitable to attack it as a result. Despite this, there are still severe security flaws that might expose your Linux system.

Furthermore, because most Linux users believe they don’t require additional security, they are more exposed if an assault is conducted. As a result, it makes sense to invest in a trustworthy Linux Firewall that will provide you with the necessary protection. However, there are instances when you are working on an important activity and your Firewall obstructs your progress by preventing genuine efforts to access your system. You may feel compelled to disable your Firewall in such circumstances. As a result, we will learn how to disable the Firewall today.

Method To Turn Off Firewall On Kali Linux

First, we’ll set up the Kali Linux firewall. We can use the command to build a firewall in Kali Linux because it does not come preinstalled. UFW is a simple software for administering a Linux firewall that seeks to give a user-friendly interface. It’s the default on Ubuntu, and it is also available for Debian, CentOS, and other Linux distributions. 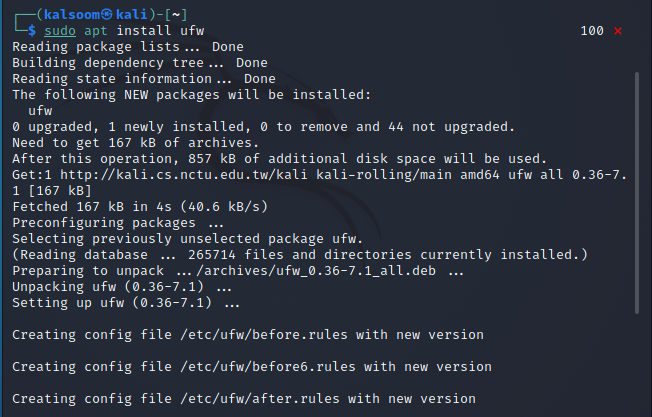 Our Kali Linux Firewall has been successfully deployed, and now we can use the status command to verify its status. Run the following stated instruction in the terminal of Kali Linux to verify the initial status of the ufw firewall.

Currently, the status is “Active”. As the purpose of this tutorial is to teach how to disable a firewall, you can use the disable command to turn it off. Run the following stated instruction in the terminal of Kali Linux to disable the firewall:

As it is already displayed in the above screenshot that “Firewall stopped and disabled on system startup”. We can again use the status command to verify its status.

Your Kali Linux system’s Firewall has now been effectively disabled. However, we need to double-check it. We can quickly check this by using the following stated command to verify the current state of our Firewall:

Currently, the status is “inactive”. In most cases, a user disables the Firewall only when he/she is attempting to complete a critical operation and the Firewall is obstructing that task. However, once the user has completed the task, it is strongly recommended that the Firewall be enabled again. If your Firewall has already been disabled, you can re-enable it by first performing the following command.

In this discussion, we learned how to use firewalls, as well as their importance on a computer system. However, we also found that there are times when we need to disable the system’s Firewall to do some critical tasks. You can disable the Firewall in the Kali Linux system using the method described above, depending on your specific situation. It also is advised that you enable the Firewall once you have finished the process for which you sought to disable it so that it can easily safeguard your computer from any malicious software and hackers. Hopefully, this guide will be productive for you to enable and disable the firewall in Kali Linux operating system.