This tutorial will show you how to install Kali Linux on a USB drive, add
persistence so that you can save files on the drive and then run Kali from the
USB drive. It is one of a series of tutorials which will help you setup the proper environment
for using Kali Linux and then show you how to use it’s tools.

The tutorials in the series include:

How to download Kali Linux is explained in the tutorial ‘Installing Kali Linux as a VM’, the first in this series. The images can be found here: https://www.kali.org/downloads/.

How to verify the Kali Linux ISO is also explained in the tutorial ‘Installing Kali Linux as a VM’. To do this run the following:

The resulting SHA256 signature should match the signature displayed in the sha256sum column on the official download page for the image.

The quickest way to get up and running with Kali Linux is to run it live from a USB drive. This method has several advantages:

To create a bootable USB drive you will need a verified copy of the ISO image of the latest Kali build and a USB drive, a minimum 8GB in size. Creating a bootable Kali Linux USB drive is fairly easy. Once you’ve downloaded and verified your Kali ISO file, use one of the following commands:

I will be using the first method on MX Linux.

Log into root (or use sudo) and check the list of disk drives before inserting the USB drive: 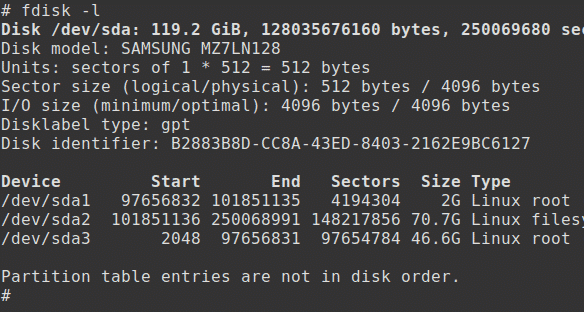 Now insert the USB drive and run the command again:

This will return something similar to: 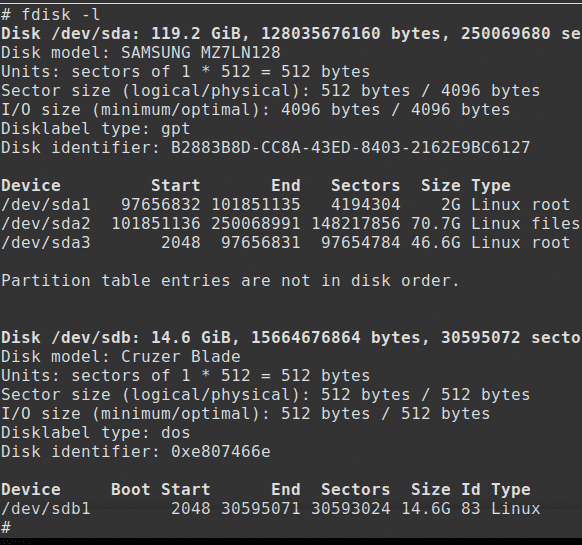 Here the USB drive is mounted as /dev/sdb.

To create the bootable USB drive, change to the directory containing the ISO and run the dd command. This will take between 5 an 10 minutes.

WARNING: Although this process is very easy, be careful as you easily overwrite a disk drive if you specify an incorrect path. Double-check what you’re doing before you do it, it’ll be too late afterwards. The command dd is not known as disk destroyer for nothing!

To test the bootable USB drive, reboot the machine. 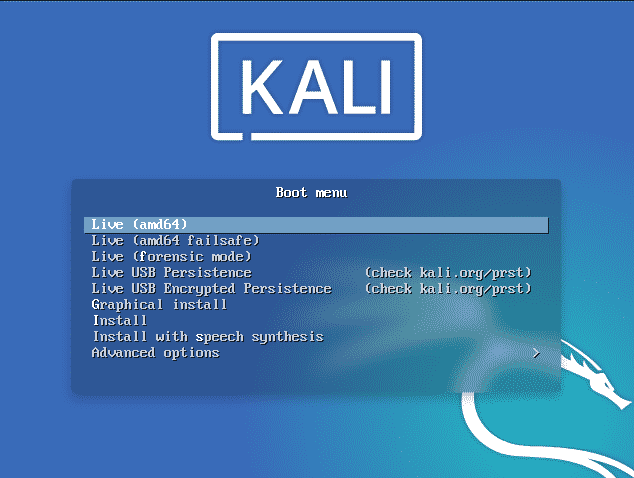 The Kali Linux Live USB drive has an option, option 4, on the boot menu which enables the use of persistence, the preservation of data on the USB drive across reboots of Kali Live. This can be very useful as changes to files can be saved even when booting from different systems.

Here we setup the Kali Linux Live USB drive to supprt persistence. We will assume that:

To add persistence, first boot into a Linux system and insert the Kali Live USB drive. Here I will be using MX Linux.

First insert the USB drive and display the disk details: 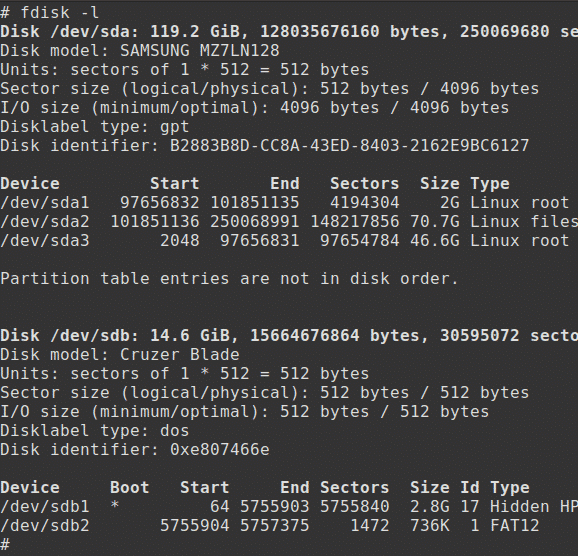 Then to show the help screen enter m at the command prompt: 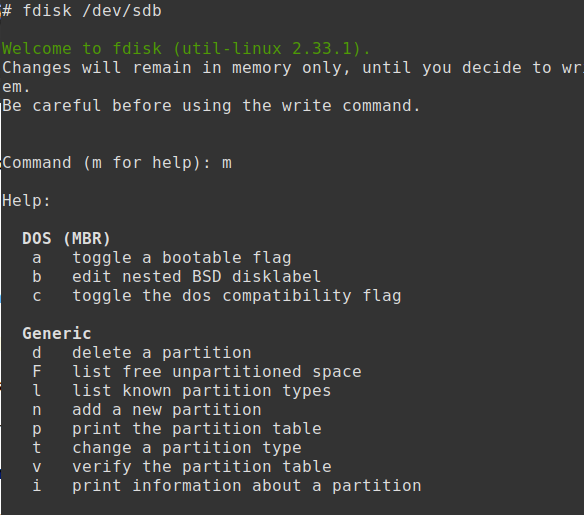 Note that the defaults are shown in brackets.

Press return to accept the default for the first sector. 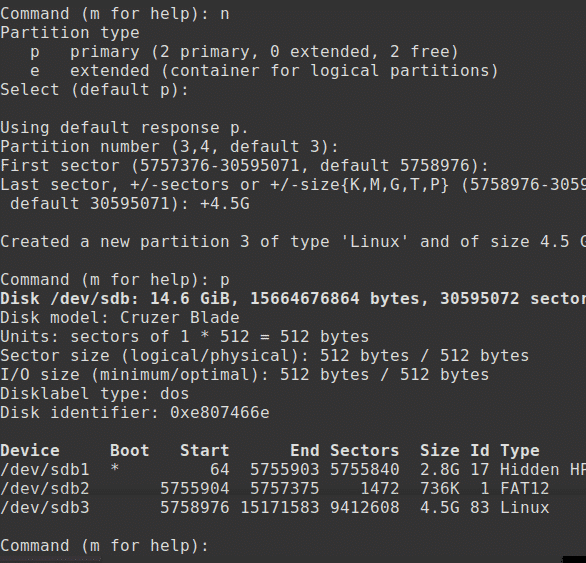 To finish and write the new partition table to disc, enter w:

You can also check with:

The next step is to create an ext3 file system on the partition and label it persistence. This may take a few minutes:

Create a mount point and mount the new partition: 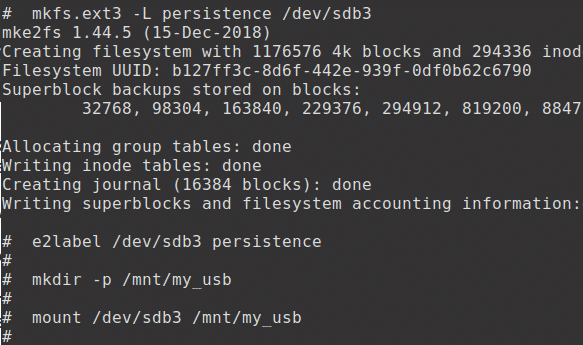 Then create the configuration file to enable persistence: 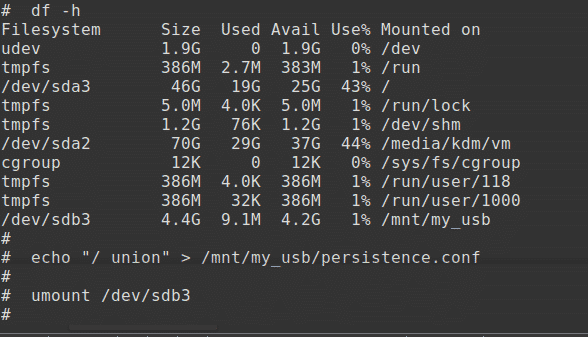 Now choose not the first but the 4th option. 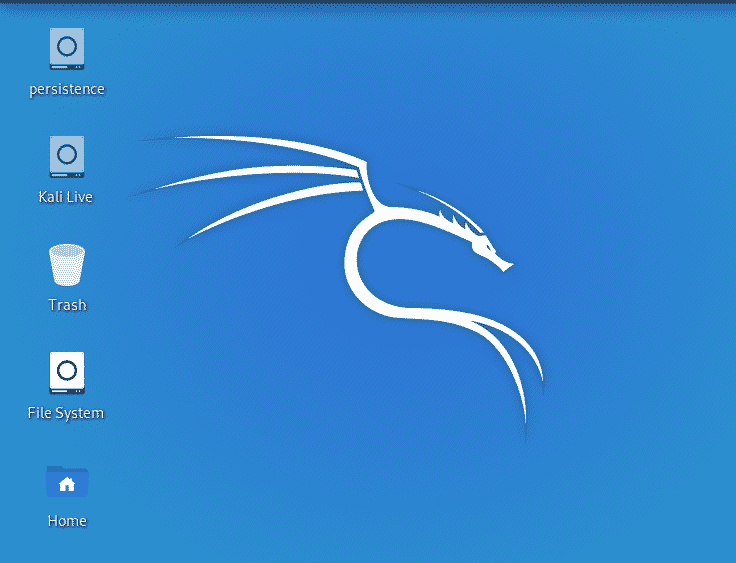 Open a terminal window and enter:

Save the following text in the new file myfile:

$ echo This is my persistent file>myfile
$ ls
$ cat myfile 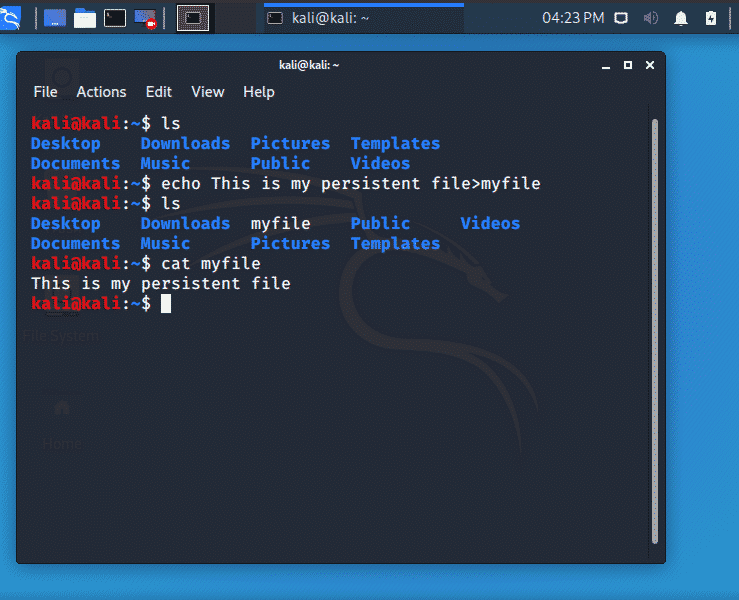 Now, shutdown the system and remove the USB drive.

To test that persistence is working, reboot from Kali Live Linux USB, open a terminal and enter:

If the USB drive was correctly configured, the file will be displayed.

In this tutorial we have looked at how to create and test a persistent Kali Live Linux USB drive.

I hope you will put the knowledge gained here to good use and attempt to create and test your own USB drive. Then I suggest that you move on to the next part of this series, Configuring Kali Linux.

Ken has been a Linux (and Unix) trainer in the UK for over 20 years and has both knowledge of, and a passion for, Linux and open source. He keeps abreast of developments in Linux using both Mint with Cinnamon and MX with Xfce as his prefered desktop environments. He still delivers courses, in fundamentals, shell scripting and administration, using Virtual Box VMs running CentOS, Ubuntu and Kali.