VirtualBox is one of the popular virtualization platforms from Oracle Corporation. With VirtualBox, we can run multiple operating systems simultaneously. We do not need to mess up with our main Host OS. It has many powerful networking features to set up any desired configuration. There are six networking modes supported in VirtualBox, namely:

1. Not Attached (network card is present, but the cable is unplugged)

Note: It should be clear that all the functions that can be achieved with internal networking can also be performed through Bridge Networking. But in the latter case, there is a security risk of passing virtual machine traffic through the physical interface of the Host.

In the case of virtual appliances which are already configured, the Host-only networking helps a great deal. These appliances contain several virtual machines running different applications like database servers, web servers, etc. We can connect the web server and database server using a Host-only adapter. In this way, both can communicate with each other, but cannot connect to the outside world. This is the desired setup for securing a database server from direct access from the outside world. But in the case of a web server, we need to access it from all over the world. So to get this done, we will activate the second adapter in the VirtualBox networking option and connect it to the Bridge adapter.

To enable Host-only networking mode in VirtualBox, follow the steps below:

Step 1. We need to create a Host-only network adapter. For this, go to the “File” option in the VirtualBox menu bar and select the “Host Network Manager”.

Step 2. In the new pop-up window, select the green icon corresponding to “Create Host-Only Network”. A new adapter, “vboxnet0”, will be created. The IP range of this adapter can be set from manual mode to automatic mode using the “Properties” menu.

Note the IPv4 address and mask for the adapter: 192.168.56.1/24. We will need it later when configuring IP addresses on virtual machines.

Step 4. In the new pop up window, select the label corresponding to “Network”.

Step 5. On the right pane, under Adapter 1 tab:

2. Under the “Attached to” label, select “Host-only Adapter” option from the drop down menu.

3. From the drop down menu with the label “Name”, select the name of the virtual adapter (vboxnet0 in our case). Save settings and exit.

Step 6. Now launch your virtual machines and check the IP of the interfaces for both. You can use the “ip a” command for this. Let us configure each machine:

As you can see, there is no IP address for the enp0s3 interface on both VMs.

b) Now, we will set the IP address on both virtual machines. The steps will be the same for both Ubuntu and Fedora. The IP addresses should be in the range of the “vboxnet0” network.

Run the following command on each machine.

a) Check the name of the connection

a) Check the name of the connection

Now that we have configured the host-only networking, let us check if pinging is working between the VMs and host. We will ping each machine from the other:

1. Pinging from Ubuntu to Fedora and Host machine. 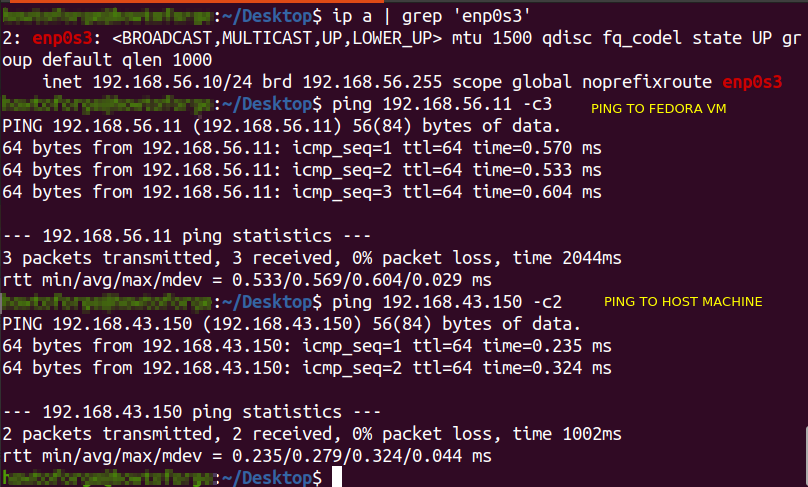 2. Pinging from Fedora to Ubuntu and Host machine. 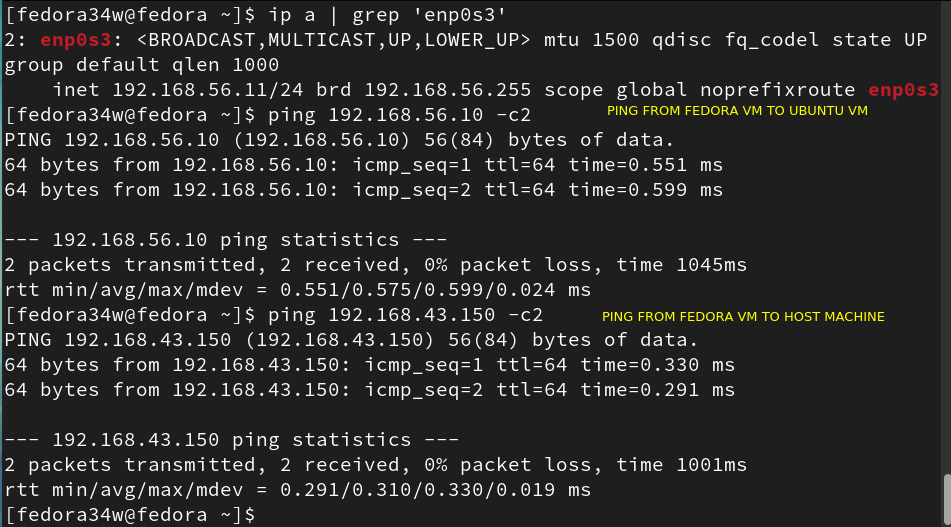 3. Pinging from the Host machine to Fedora to Ubuntu. 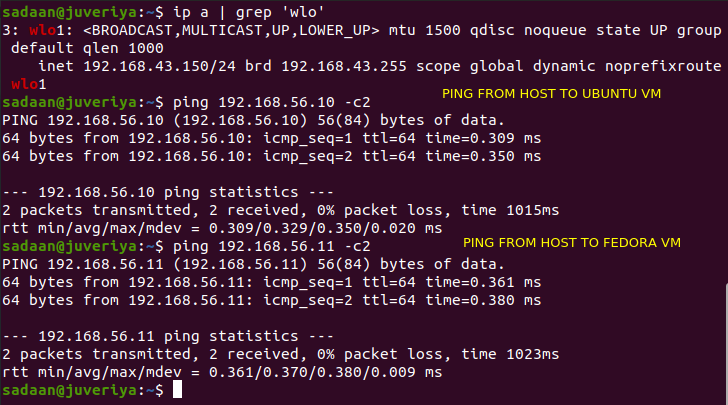 We successfully configured Host-only networking between two virtual machines (VMs) in the VirtualBox. A good understanding of various features of the VirtualBox can help to create various configurations and scenarios for testing prior to deployment.