Having power issues with your laptop can be a nightmare! The last thing you need is for your work or social life to be disrupted, and a dying battery or charger is certain to be a massive disruption! Whether it’s an important work task, a video call with family, or a heated gaming session, having troubles with power can bring whatever you’re doing to a rude halt.

Even worse – if you’ve got power issues, you still don’t know whether it’s the battery or the power supply causing the trouble. 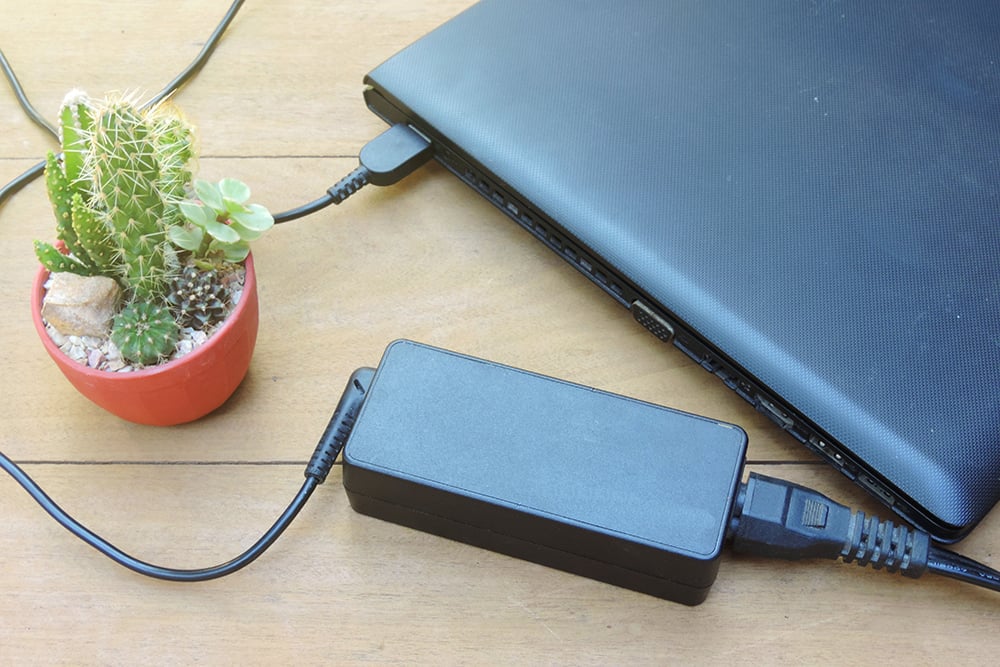 Diagnosing the issue can be a little troublesome without some help – don’t worry though, this short guide is ready to help you!

First of all, you’re going to want to have a good look at your laptop. If there’s any signs of physical damage, then stop what you’re doing and get professional help!

Fingers crossed, this shouldn’t be an issue with your laptop – but if your laptop is bent out of shape, smoking, or damaged, then take it to a qualified tech for professional service.

If the charging port is damaged, that can also give you trouble – and, again, that’s a job for a qualified pro.

Likewise, the charger can be damaged too – and as the thing that connects your laptop to the dangerous mains voltage, you need your charger to be in top condition.

Any exposed wires, cracks in the power brick, or broken connectors are an immediate danger, and mean that it’s time to dispose of the power brick and get a replacement.

If the power brick gets overly hot, or starts to smoke – again, get rid of it. Better safe than sorry, and if in doubt, ask a professional.

Finally on safety – if your laptop case is swollen, as if its kinda bursting at the seams – you might well have a swollen battery. This is an massive fire risk – the battery in your laptop is packed full of volatile chemicals, and when the battery starts to swell, there’s a very real chance that a fire could happen.

Do not pierce the battery, whatever you do – get it out of your house immediately, and into the hands of a professional for disposal.

If your battery is swollen, its an issue that needs immediate attention – do not hesitate for a minute to get the dangerous battery out of your house, and into the hands of somebody who can deal with it safely.

It’s not worth the risk of using such a dangerous battery, or keeping it in your house.

How To Test The Charger

To test your charger, you’ll need to plug it into your laptop. Obviously, make sure it’s in good physical condition before using it!

That being said, plug it into your wall and your laptop as normal. You should see an indicator light somewhere on your laptop that verifies your charger is connected. If not, check the battery notification in Windows – it’s in the bottom right of the screen, near the clock.

If your laptop or windows tells you that the battery is charging, then that’s an obvious positive sign that the charger is working. If the connection seems to be intermittent – e.g. it stops charging when the charger cable is moved – then there’s a good chance that your charger needs to be replaced.

After that, turn the system on as usual. If your laptop works fine, then you can be pretty sure that your charger isn’t the source of the issue!

How To Test The Battery

The best way to give your battery a test is to use it. Turn your laptop on without having the charger plugged in.

If it refuses to turn on, but will turn on if the charger is connected, then you can be pretty sure that no matter what the issue is, it’s something to do with your battery.

If you leave the charger plugged in for a while – say, half an hour – and then turn the laptop on successfully under battery power, then great news – the battery was just flat! It might still be old and losing charge (we’ll get to that later), but it still works for the moment.

If you just can’t get the battery to charge, however, then it’s time to accept the cruel truth – it’s dead.

If you’re able to simply slot the battery off, then you should be able to order and fit a suitable replacement yourself.

However, if your battery is internal, and needs access to the internals of the laptop to replace, then it’s time to see a qualified pro for the job.

Sad to say it, but batteries just plain get old. Laptops, mobile phones, game controllers, fire alarms – it happens to everything with a battery.

What once provided all the power you need will inevitably become weaker and weaker over the years – up to the point where it just doesn’t work at all. It’s frustrating, and it happens to all of us.

It doesn’t, therefore, mean that you’ve done something to break your battery if it seems to be degrading – it’s very likely just part of the life cycle of the battery. It can be easy to blame yourself when it comes to issues like this, but there’s no need – batteries die.

Unfortunately, this is something you just can’t prevent – sooner or later, the battery in everything you own will become useless, and you’ll just have to deal with it.

Diagnosing power issues can be a pain – it’s something nobody wants to do, especially at a crucial moment! Whether it’s your power supply, or your battery, hopefully you found some help here!