ESP32 is a microcontroller-based Internet of Things (IoT) board that can be interfaced with a wide range of devices. ESP32 is widely used in IoT based projects.

Working with ESP32 or any other microcontroller time is very important as the inbuilt timer is not that accurate so we can use a NTP server to fetch real time and can store it inside a variable that can be used later inside ESP32 code.

Network Time Protocol (NTP) uses the Coordinated Universal Time (UTC) that synchronizes the system clock with great precision and accuracy. On smaller networks NTP can provide us with clocks as accurate as 1 ms while larger networks such as LAN (Local Area Network) NTP can give accuracy with tens of milliseconds over the internet. Using this accurate clock ESP32 can execute instructions at a specific time.

NTP is an acronym of Network Time Protocol is a standard used for synchronizing devices time with their time zone. The network time protocol synchronizes the time of all network devices with the UTC also known as Coordinated Universal Time.

UTC is like GMT (Greenwich Mean Time) but it doesn’t change and remains the same all over the world. The main idea behind using the UTC is to read time from the NTP server and by applying the UTC offset we can get local time according to our time zone.

We will request time from pool.ntp.org which contains worldwide time data on the server and any one can request their local time using this pool. Following are some other servers that we can access:

The GMT offset describes the time difference in hours between the time zone you are living to the GMT. For example, if we use the time zone of the USA, we can set it to UTC = -11:00.

As we have covered the basics of NTP server now we will check how we can send a request to NTP server and read the local time using ESP32 with Arduino IDE code.

After that SSID and password of the network to which ESP32 will connect is defined. Replace your network credential here. After that we have defined GMT offset as 18000 sec which is (UTC+5 hour). You can replace your own time zone UTC here. Follow the link to get the GMT offset for your time zone.

In addition NTP server address is specified using the command:

This command automatically selects the time server which will search you. However, we can also set a time zone using the NTP servers explained in the NTP Server section.

At the end we configure the ESP32 as NTP client and to obtain date and time. For that we used the configTime() function.

Lastly, using the printLocalTime() function, the current date and time is printed on the serial monitor. This function contains a time structure tm which stores all the information in the timeinfo variable.

Each letter of time structure relates to a specific information: 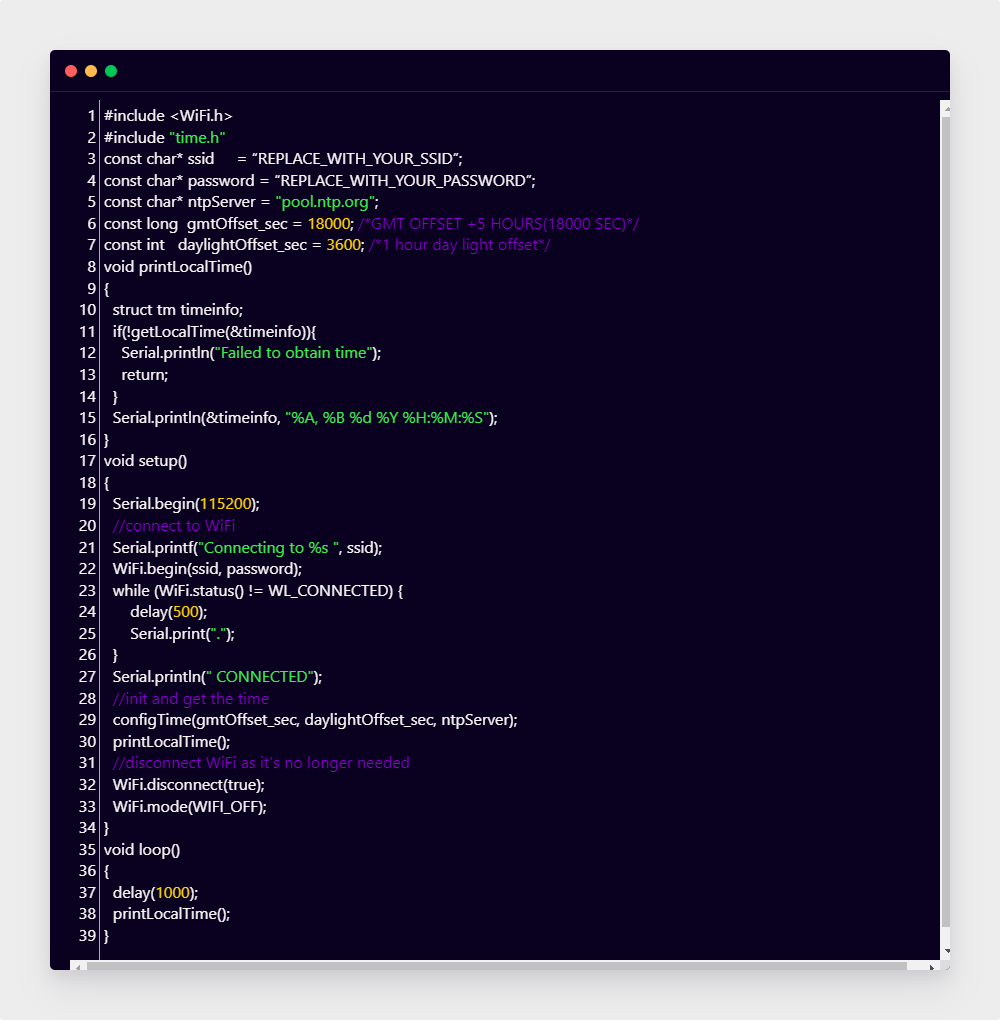 After uploading code ESP32 will connect with a WiFi network and send a request to the NTP server to receive the current date and time. Following output can be seen on the Arduino serial monitor.

Current time on my PC and ESP32 is matched. 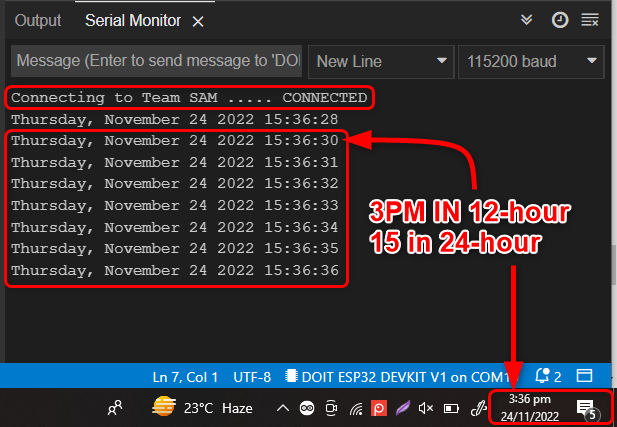 We have successfully read time from NTP server using ESP32 as client.

Time is very important for applications like time stamping and executing instructions at specific times to generate output. Inbuilt timers are not so accurate, so we can use a NTP server to read the current time and date. This time can be stored inside a variable to use inside our code. This lesson helps in getting accurate time of any time zone around the world using ESP32.