This tutorial explains how to connect to Wi-Fi with Kali Linux using both graphical and text modes.

After reading this tutorial, you’ll know how to connect to your wireless network from your graphical environment and the console using both nmtui and mncli tools.

Connecting to Wi-Fi from Kali Linux is the same as connecting from any other Linux distribution. Some users may find their wireless card disabled.

To begin, identify the network icon on your taskbar, which is displayed as:

As you can see, the network icon is located next to the clock. Once identified, right-click on it to show all available options, including Enable Wi-Fi, as shown in the image below. Make sure the option Enable Wi-Fi is marked: 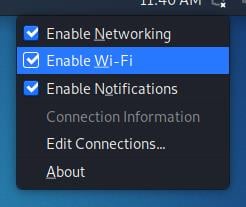 Once enabled, left-click the network icon again, and you’ll see all available networks for connection. Then, press the one you want to connect to: 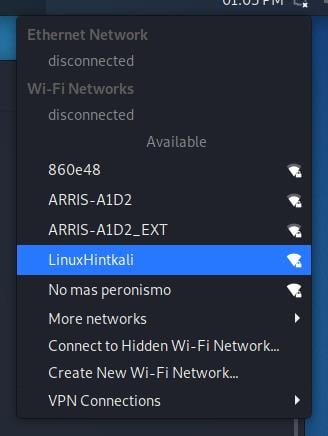 After clicking on your network, you should connect without problems.

Before connecting to a network using the terminal, let’s see how to detect all available networks. To scan for networks, you can use the iwlist command followed by your wireless device and the function scan below: 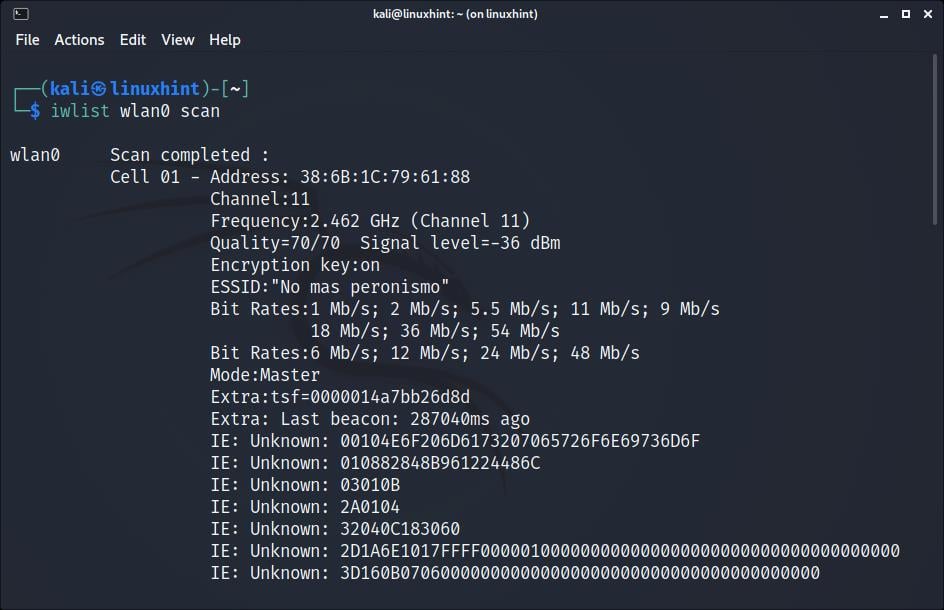 As you can see, depending on the quantity of available networks, the output will display a long list of data belonging to each network, but we are only interested in the ESSID.

You can get a more human-friendly output by implementing grep as shown below; in this manner, iwlist will only print the networks ESSID:

Once you scanned all networks and identified the one you want to connect to, you can use different text-mode methods to establish a connection.

The nmcli command allows us to control the NetworkManager from the command line and using it is pretty simple. The following example shows how to connect to a network named LinuxHintkali, whose password is linuxhintpass.

After scanning and identifying your network with the iwlist command explained previously, run the command below, replacing LinuxHintkali with the ESSID of the network you want to connect to, and replacing linuxhintpass with its password:

As you can see, the connection was established properly.

You can get additional information on nmcli at its man page https://linux.die.net/man/1/nmcli.

The nmtui command is a curses-based tool that allows you to control NetworkManager in an interactive mode.

To run it, simply execute the command below:

The following menu will show up. Use your keyboard arrows to select “Activate a connection” and press ENTER: 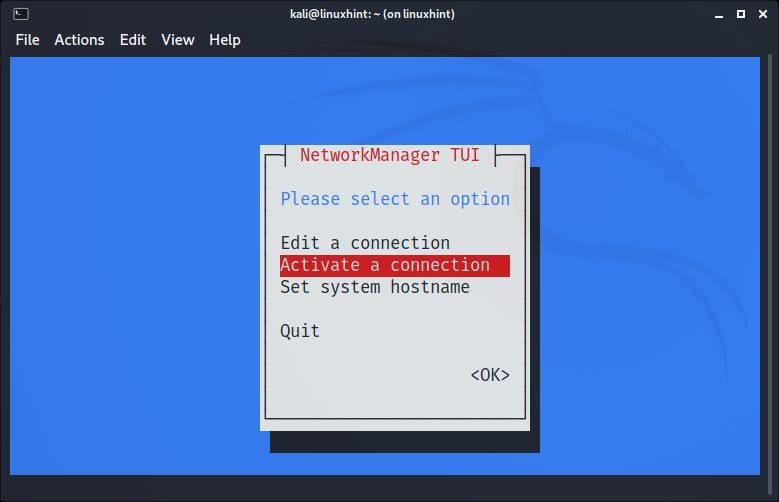 The next screen will show all available networks. Again, use your keyboard arrows to select the network you want to connect to and press ENTER: 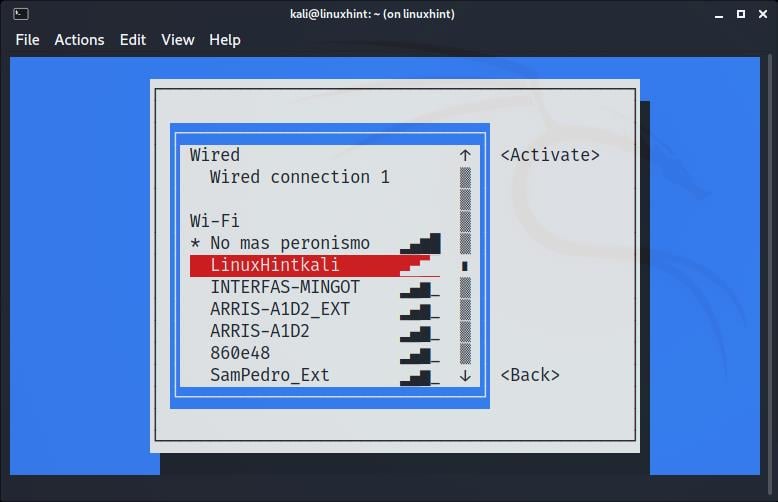 The connection will be established. You already must have internet access: 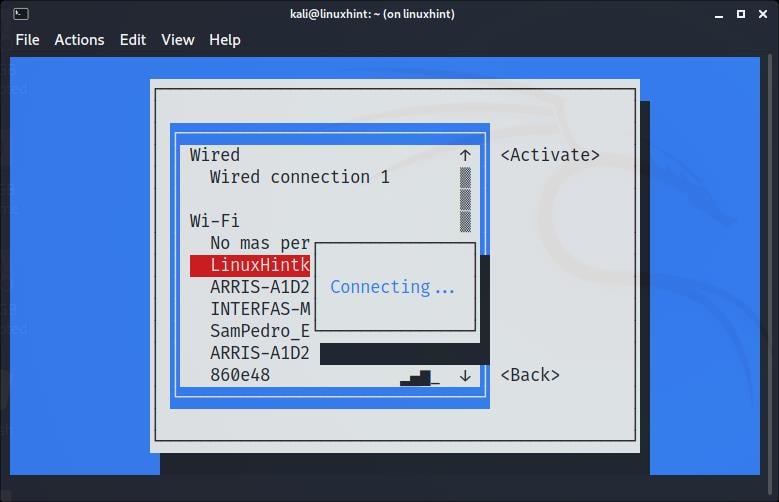 Once connected, select Back and press ENTER: 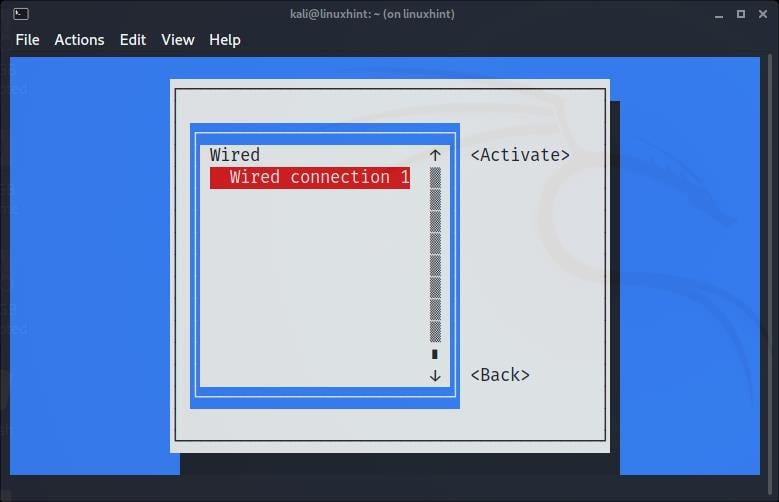 Move to Quit, and press Enter to leave nmtui: 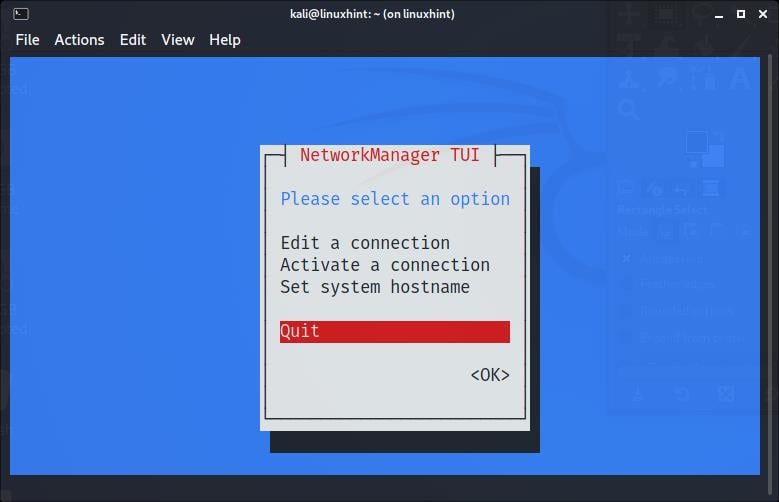 More probably than the command shown above to install drivers, your wireless card may be down. To set it up, first identify your network device name:

As you can see in the output above, my network device is named wlp3s0. To set it up, I run the following command:

Remember to replace wlp3s0 for your wireless card name.

As you can see, connecting to Wi-Fi on Kali Linux should not be a problem even for basic Linux users. Linux, not only Kali, offers a variety of methods to establish connection. This tutorial was written after finding many Kali users report problems connecting. In most cases, their Wi-Fi adapter was disabled and enabling it from the taskbar, as shown in the first steps of this tutorial, solved the problem. Learning the text mode techniques explained in this article is especially important because they are almost universal for all Linux distributions and independent of their graphical environment.

Thank you for reading this tutorial explaining how to connect to Wi-Fi on Kali Linux, keep following us for more Linux tips and tutorials.