A button is a fundamental part of HTML that performs various tasks. By using CSS, you can design and style the button. There are different ways to design the button, such as coloring the button, resizing, hovering, and many more.

In this article, first, we will learn how to create a button, then change the color of a button on hover.

How to Change Button Color on Hover in CSS?

In CSS, “:hover” is used to change the button’s color on hover. “:hover” is a pseudo-class that allows changing the behavior of the HTML elements when a mouse over on it, such as elements like links, buttons, images, and many more.

The syntax of :hover is provided below.

In the above-provided syntax, “a” refers to the HTML element where the “:hover” is applied. In CSS, you can set the hover behavior of the HTML elements, such as the element’s color, size, and width.

In the HTML, first, we will create a div and add a heading with <h1> and a button using a tag. Here, we will assign the class name of the button as “btn” and the button text as “Hover on me”.

The outcome of the above-mentioned code is given below. You can see that the heading and button are created:

Now, move to the CSS to style the div and button one by one.

The below-given output indicates that the added style is successfully applied on the div: 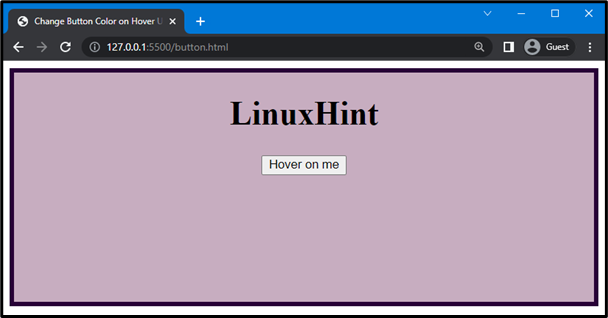 In the next step, we will style the button using CSS.

The button is now styled up: 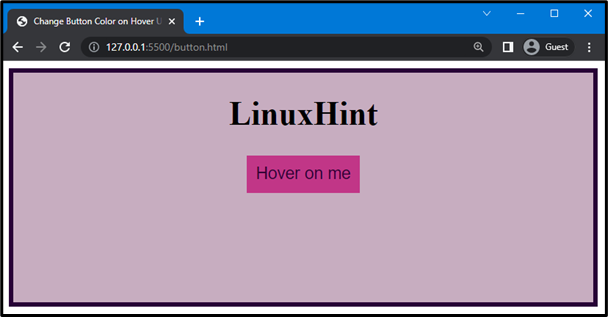 Further, we will apply “:hover” to change the color of a button on hover.

In the below-provided output, you can see that, the color of the button is changed when a mouse hover on it:

That’s it! We have explained the method to change the button color on hover using CSS.