Why Use zlib in Python?

In terms of security, this library/module plays a significant role. Numerous applications need the ability to compress and decompress arbitrary data, including strings, files, and structured in-memory content. One of the best features of the zlib module is its compatibility with the gzip tool/file format, which is a widely used and popular compression application on UNIX.

How Do We Use zlib’s Compression and Decompression Functions in Python?

Now, we will see how to compress a data string, data strings, and files using the zlib library.

Compressing a string is possible with the help of the zlib library’s compress() function. This function’s syntax is fairly simple and only requires two arguments.

An example of how to use the compress method to a string is provided below:

If we specify the level parameter as 0, there will be no compression:

Aside from the string data parameter, the only distinction between the parameters of this method and those of compress() is the wbits parameter, which regulates the window size and determines whether or not to include the header and trailer in the output. The following are possible wbits values:

The method argument will specify the compression algorithm. The default algorithm, or currently available algorithm, is DEFLATED. The strategy argument defines compression tuning.

The following code shows how to use the compressobj() function:

We used simple string data that is not a large data stream to demonstrate how the compressobj() function operates. The string “I love writing python codes” has been compressed. This method is typically employed when the streams are too big or difficult to store in memory. This technique is crucial in larger applications because we can customize the compression and use it to compress data in chunks/series.

The best level of compression offered by this algorithm, Z BEST COMPRESSION, is used in the compress function. The ratio of the length of compressed data to the original data length is used to compute the level of data compression. The file is 6% compressed, as seen in the output.

Now, we will see how to decompress a data string, data strings, and files using the zlib library.

The decompress() function makes it simple to decompress a string of compressed data.

This function decompresses the string data bytes. The history buffer’s size can be set using the wbits parameter. The largest window’s size is used as the default setting. The compressed file’s header and trailer are also asked to be included. Possible values are:

The bufsize argument specifies the buffer size’s initial value. However, the key feature of this argument is that if the specified is not exact, it will be automatically adjusted if more buffer size is required. The data string that is compressed can be decompressed using the following example: 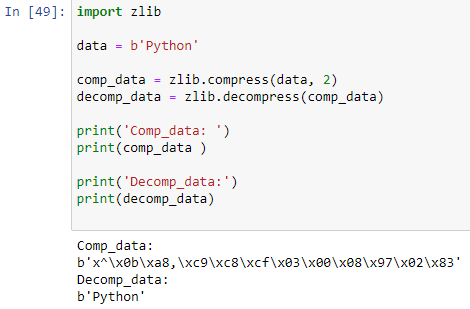 Depending on the source and size of your data, decompressing large data streams might require memory management. The decompressobj() method enables you to split a stream of data into multiple chunks that we can decompress separately if you cannot use all of the resources or don’t have enough memory. 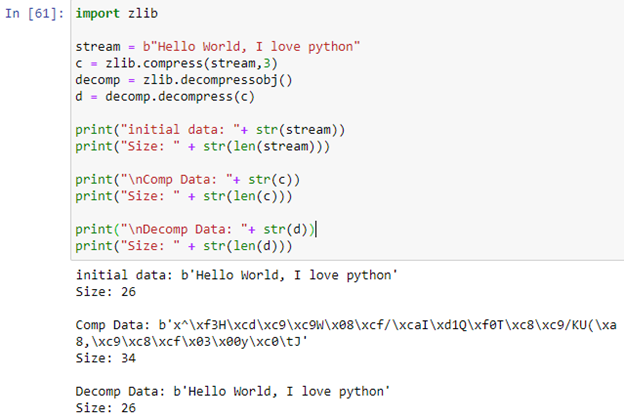 The length compressed stream is 34. After decompressing, the stream length of 26 is returned, which was the actual size of our data stream.

The data in the file can be easily decompressed, as we have seen in previous examples. The only difference between this example and the prior one is that, the decompress() function will be used after getting the compressed data from the file. This method is useful when data is compact enough to fit conveniently in memory.

The sample.txt file containing the string “hello world I love python” has been read. We chose to use decompress() rather than decompressobj() because the file contains a small string.