IPSEC (Internet Protocol Security) are 3 cryptographic protocols useful to encrypt communications through a network, usually used for VPN, but applicable to protect the IP (Internet Protocol) in different cases. IPSEC is part of IPV6 while optional for IPV4. The 3 protocols composing IPSEC are AH (Authentication Header), ESP (Encapsulating Security Payload) and IKE (Internet Key Exchange). While AH and ESP work in different ways, both of them can be combined to provide different functions.

The association consists in the keys administration and establishing a secure connection between the devices, this is the first step in a connection and is carried out by the protocol IKE (Internet Key Exchange).

In this case the authentication does not provide encryption because the information is not ciphered, the function of the AH protocol and it’s authentication is to confirm the delivered packet wasn’t intercepted and modified or “broken” during the transference. The AH protocol helps to verify the transferred data integrity and the implicated IP addresses. Using IPSEC with AH won’t protect our information from a Man In the Middle attack but it will let us know about it by detecting differences between the received IP packet’s header and the original one. To do it the AH protocols identifies packets adding a layer with a sequence of numbers.

AH, Authentication Header as its name specifies also verifies the IP header layer, while the ESP doesn’t include the IP header.

Note: IP Header is an IP’s packet layer containing information on the established connection (or going to get connected), such as the source and destination address among more.

In contrast to the protocol AH which only authenticates the integrity of the packets, senders in IP headers, ESP (Encapsulating Security Payload) packet additionally offers encryption which means if an attacker intercepts the packet he won’t be able to see the content because it is ciphered.

IPSEC combines both asymmetric and symmetric encryptions to provide security while keeping speed.

Using IPSEC is an example of the need to add additional support to our kernel to be used as explained in a previous article on the Linux Kernel. You can implement IPSEC on Linux with strongSwan, on Debian and Ubuntu systems you can type: 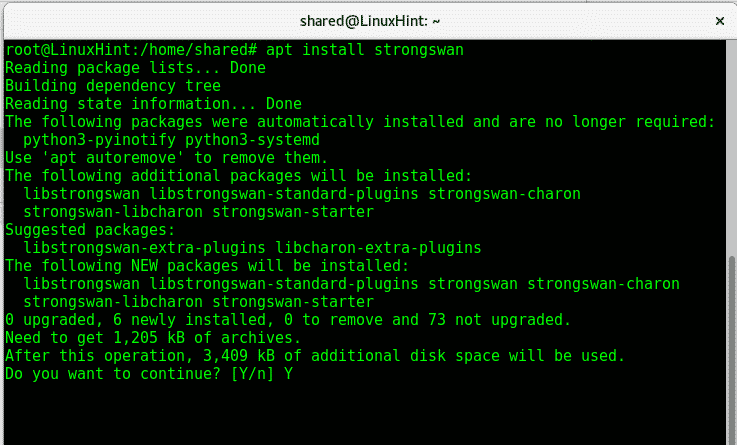 An article was also published on VPN services including IPSEC easy to setup on Ubuntu.

I hope you found this article useful to understand IPSEC protocols and how they work. Keep following LinuxHint for more tips and updates on Linux.