This guide is optimized for Nginx 1.0.1 and above, and thus it’s highly recommended to update the existing Nginx instance to aforesaid or above version. However, some of the commands, syntaxes might still work for any version before the aforesaid version. Since this guide is about URL rewriting, which is a bit advanced topic, it assumes the audience is aware of installation procedure of Nginx, and thus it’s not explained here.

Return is the basic directive that performs URL rewriting and is simple to understand. It doesn’t use regular expressions, but it can include variables to parse, captured from the location block’s path. Usually, return directive is used to redirect the request URL to a different location, and therefore it often uses HTTP codes like 301 for permanent redirection, and 302 for temporary redirection. The following code snippets demonstrate some of the use cases of the return directive.

The following code snippet redirects the request URL to Google.com. It can be used either directly under the server code block or under a location code block, but make sure not to redirect to the same domain in order avoid redirect loop

The following code snippet redirects the request URL to Nucuta.com along with the path, for instance the aforesaid example doesn’t contain any path, parameters, and thus no matter which URL is typed in the address bar, the request is redirected to the root domain of Google, whereas in the following example, the path, along with the parameters are carried over without the domain name. Alternatively, $is_args$args can be used, but then instead of $request_uri, $uri variable should be used as $request_uri contains parameters of the URL as well. If the requirement is to redirect to a different directory of the same domain, then use $host variable instead of the domain name in return directive, for instance in the following example instead of nucuta.com, use $host.

Rewrite is a directive used to rewrite URLs internally in the web server without exposing the underlying mechanism to the client side. As per its syntax, it’s used with regular expressions. The basic syntax goes as following. The regex placeholder is for using regular expressions, replacement placeholder is for replacing the matched URL, whereas the flag is for manipulating the flow of the execution. At the moment, the flags used in rewrite directive are break, permanent, redirect and last.

Before proceeding to the regular expressions, replacements, pattern capturing, and variable, it’s important to know about how flags make the internal engine of Nginx to behave. There are four major flags used with rewrite directive as explained earlier, among them permanent, redirect flags can be paired together as both perform same functionality, meaning redirection.

Redirect flag is used to signal the browser the redirection is temporary, which is also helpful in search engine crawlers to recognize the page is temporary moved away and will be reinstated in its original location some time later. When the page signals it’s 302, search engines don’t make any changes in its indexing, and therefore visitors still see the original page in search engine index when searching, meaning the old page isn’t removed and, in addition, all the qualitied, such as page rank, link juice are not passed to the new page.

Permanent flag is used to signal the browser the redirection is permanent, which is also helpful in search engine crawlers to recognize the page is permanently moved away and will NOT be reinstated in its original location some time later like with temporary moving. When the page signals it’s 301, search engines make some changes in its indexing, and therefore visitors see the new page in search engine index instead of the old page when searching, meaning the old page is replaced with the new page, in addition, all the qualitied, such as page rank, link juice are passed to the new page.

Nginx uses Regular expression heavily with rewrite directive, and thus knowing about Regular expressions come in handy in this segment.  There are multiple types of regular expressions, but Nginx uses Perl Compatible Regular Expressions aka PCRE. Having a regular expression testing tool is useful to make sure the written pattern indeed works beforehand using it in the Nginx configuration file. This guide recommends https://regex101.com/ as the tool, and all the following examples are tested with the aforesaid tool thoroughly.

Out of 4 flags, 2 flags were already explained in this guide, the remaining ones are last, and break. Before understanding how the remaining flags work, it’s important to understand how Nginx engine behaves with rewrite directives. When a URL is sent along with a request, the Nginx engine tries to match it with a location block. Whether it’s matched or not, if a directive like rewrite, return is stumbled upon, it’s executed sequentially. If the sent URL is matched with the pattern of a rewrite directive, Nginx engine executes the whole configuration file, regardless of where the rewrite directive is specified as a loop, until the newly rewritten URL matches with one of the location blocks.

The following URL is used as a demonstration to explain how both flags make the execution flow of Nginx engine behaves with rewrite directive. The following screenshot portrays the file structure of the web server. 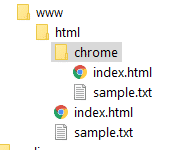 When No Flag Is Used

When no flag is used, both rewrite directives are executed sequentially; hence first URL in the following list turns into 2nd, then 2nd URL turns into the last URL So when the sample.txt file in browser folder is requested, web server actually serves the sample.txt file in the root folder. Since the URL rewriting is completely abstracted away from the browser, it doesn’t see any difference in serving compared with return directive that states the browser whether the request was redirected or not with a HTTP number.

When Either Break, or Last Flag is Specified Outside of Location Block

When Last Flag Is Used Inside of a Location Block

When Break Flag Is Used Inside of a Location Block

Break flag, on the other hand, when it’s inside of a location block, stop parsing anymore rewrite directives, regardless of where they are located, when one rewrite directive is matched with the request URL, and serves the content to the user.

URL rewriting is a process of rewriting URLs within a web server. Nginx provides multiple directives like return, rewrite, map directives to make it possible. This guide demonstrates what are return, and rewrite directives, and how they are used to rewrite URLs with ease. As demonstrated in the examples, return directive is suitable to signal the browser, and the search engine crawlers the whereabouts of the page, whereas rewrite directive is useful in abstracting out the URL rewriting process without letting the browser knows what is going on behind the scene. This is quite useful in serving content through a CDN, cached server or from a different location within the network. The users never know from where the resource is coming from as the browser only shows the URL given to them.