Whether you pronounce it as ‘gif’ or ‘jif’, it’s still a no-brainer that the Graphics Interchange Format is the most widely used image format there is today, gaining in popularity exponentially. This surging bitmap image format is used for a number of purposes, most of which include producing eye-catching animations to improve digital marketing. However, due to its convenience of storing multiple images in the same file while retaining file compression, it is also now considered a popular alternative to screen recording.

While there’s a lot of support for GIFs on Windows and other operating systems like Android, they can also readily be produced on Linux with a lot of flexibility and in the best quality. Let’s look at some of the most popular GIF recorder tools used to produce GIFs on Linux.

If you’re looking for a GIF recorder tool with minimal, straight-forward features required only for basic GIF-making support, then Peek is perfect for you. Its basic features include the ability to edit frame rate and delay timer. It doesn’t have advanced features but is complete if you want to make a quick GIF with not many control requirements. Hence, its user interface (yes, Peek is a GUI-based recorder) is also very simple to understand and navigate. For beginners, Peek should be the go-to GIF recorder. You can easily take screencasts of a Linux desktop and compile them into a short, compressed animation using Peek’s GIF recorder. You’ll only need to place the recorder window on top of the screen area you want to record and start recording!

It’s also very simple to install Peek via the command line interface of the Linux terminal. For Ubuntu users, the commands that need to be executed for the installation are as follows: 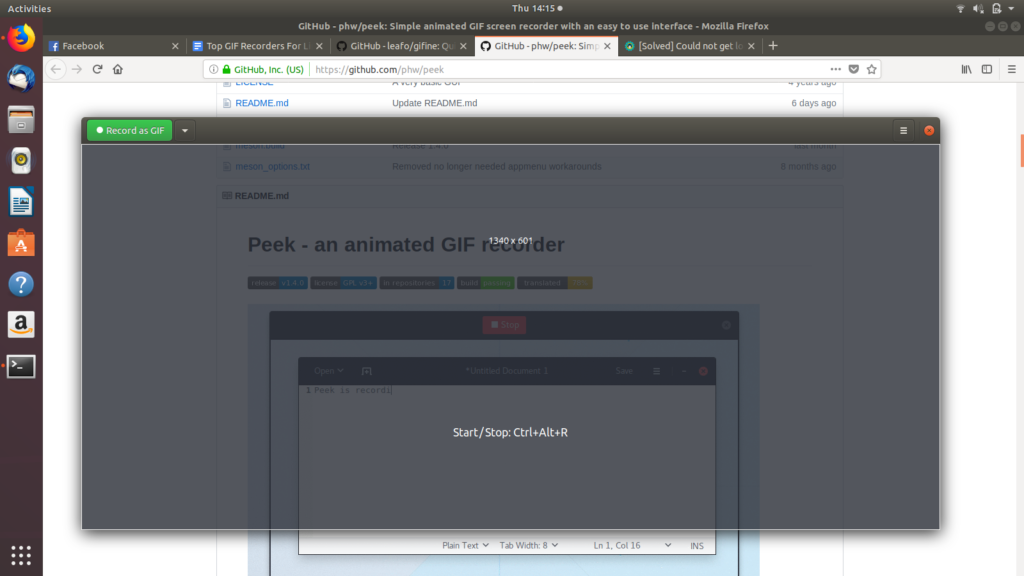 If the basic editing features of Peek don’t fulfill your GIF recording needs, then Gifine is a good alternative. Gifine is a straightforward piece of software that may not offer the sleekest interface but certainly gets the job done. It offers built-in support for editing and trimming your gifs which can save a lot of time when it comes to making something special.

Its installation is also not the simplest and can feel a bit cumbersome too. The problem is that it’s not a one-liner install command but an amalgamation of different commands that contain certain dependencies as well. It requires about 6 commands to be run successfully in order to be used. Although it is troublesome in the installation process, the benefits it brings certainly outweigh the initial barricades. 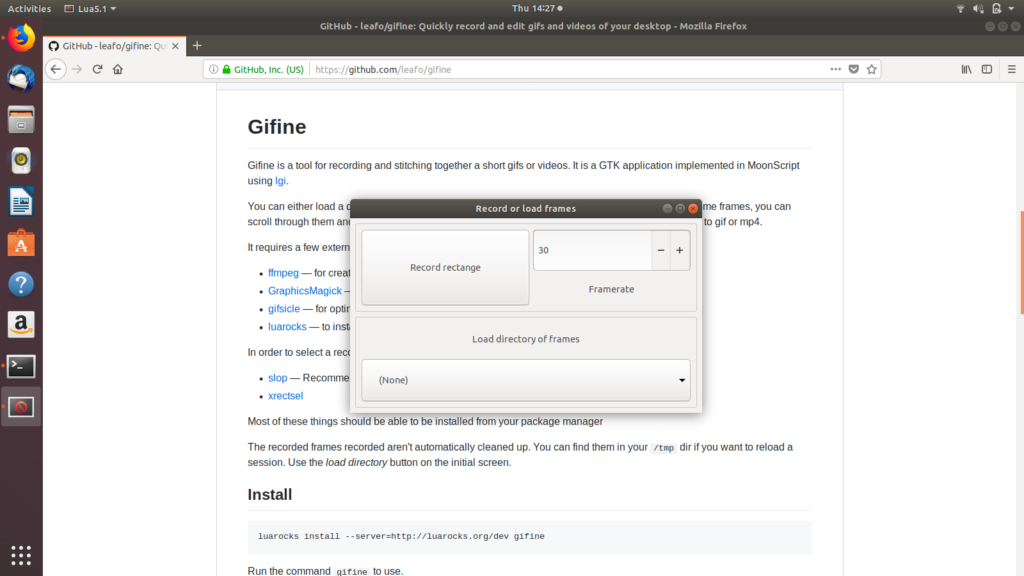 The interesting thing about Ubuntu is that a large number of programs are given a command-line version and Byzanz is one of them. It is a gif recorder that runs on the command-line interface (CLI). This mode of usage allows it to be very small in size and frees up a ton of processing power that can be put to other use. The only drawback of Byzanz is that it does not support a normal Graphical User Interface (GLI) and is therefore not aimed at novice Linux users.

The documentation that comes with Byzanz is good enough for even beginner users to start with and is a good recommendation for anyone who has a need for a gif recorder. It also gives good practice for getting used to the Linux environment and will make future tasks that run on the terminal much less daunting. 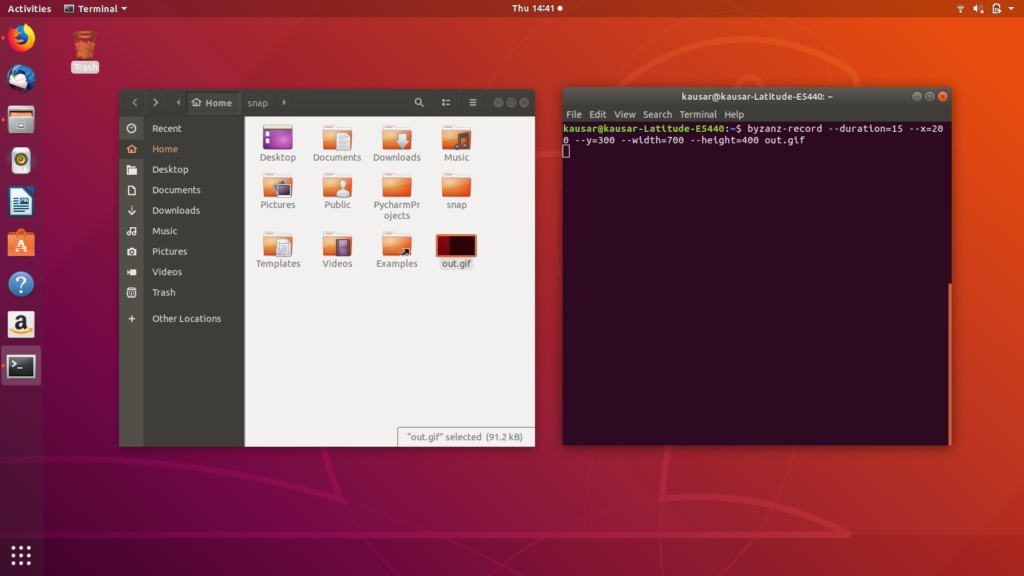 SilentCast is a feature-rich gif recorder that has a fairly large userbase and is therefore constantly showered with upgrades and bug-fixes. It may not be the best-looking gif recorder but it certainly gets the job done and there is a good chance that you will not need to use other software to get the right product.

SilentCast is certainly one of the most lightweight recorders out there but that edge comes with a little drawback as well. A series of terminal commands are needed to make it go live. If instructions are clearly followed then there won’t be any problem with the installation and you should have it up and running in no time! 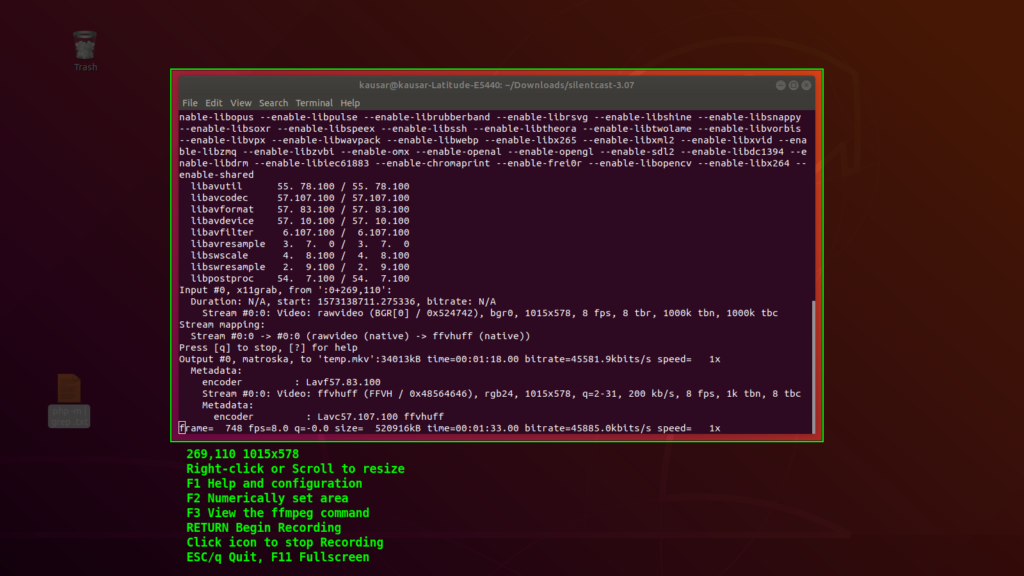 Kgif is a small project on GitHub that makes creating gifs a breeze. The project only has 2 contributors so you should not expect a large number of features to be present here. It does what it is supposed to, nothing more and nothing less. Kgif makes use of the terminal to work and might not be the go-to choice of GUI enthusiasts. If you are low on resources and just want something that can give you a gif, Kgif will be all you need.

There is a neat little feature here that allows you to set a delay for how long before the script should start capturing. It’s activated in a single command:

X will be replaced by the number of seconds you want the delay to be. 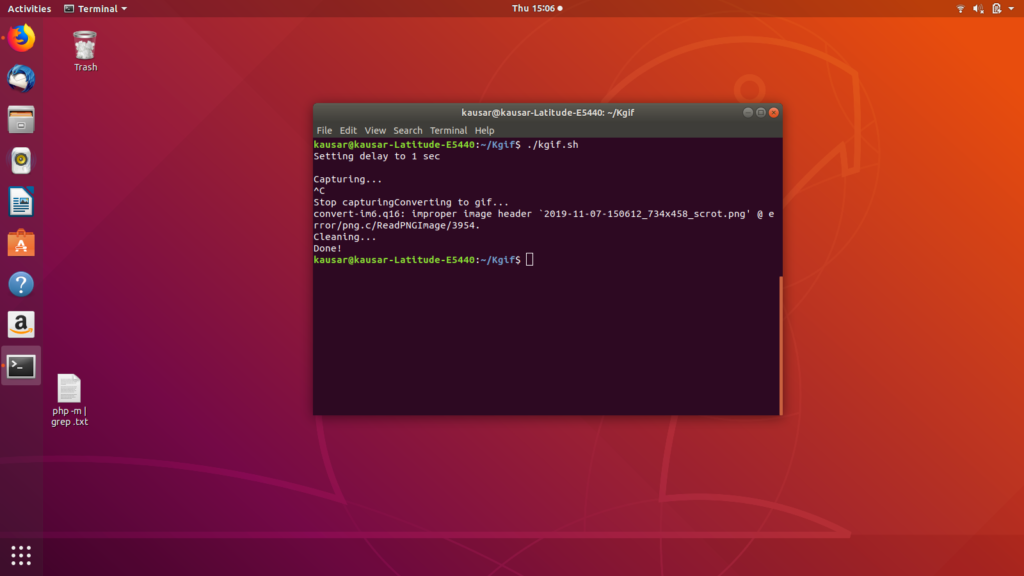 Linux is famous for having loads of free and open-source software that would otherwise be behind a paywall on other operating systems. Gifcurry is one such freeware on Linux and is a splendid experience along with as well. All basic gif editing functions are available here and there are also some options that can be used for video editing as well. These surplus features make sure that you won’t have to download two to three different software to complete your task. Not only does this save you time but also saves space.

You just have to make sure that your system has the right dependencies installed before you can make use of Gifcurry. The dependencies are in no particular order: GTK+, FFmpeg, and ImageMagick. With everything in place, Gicurry should install in a breeze when you enter the following command on the Linux command: 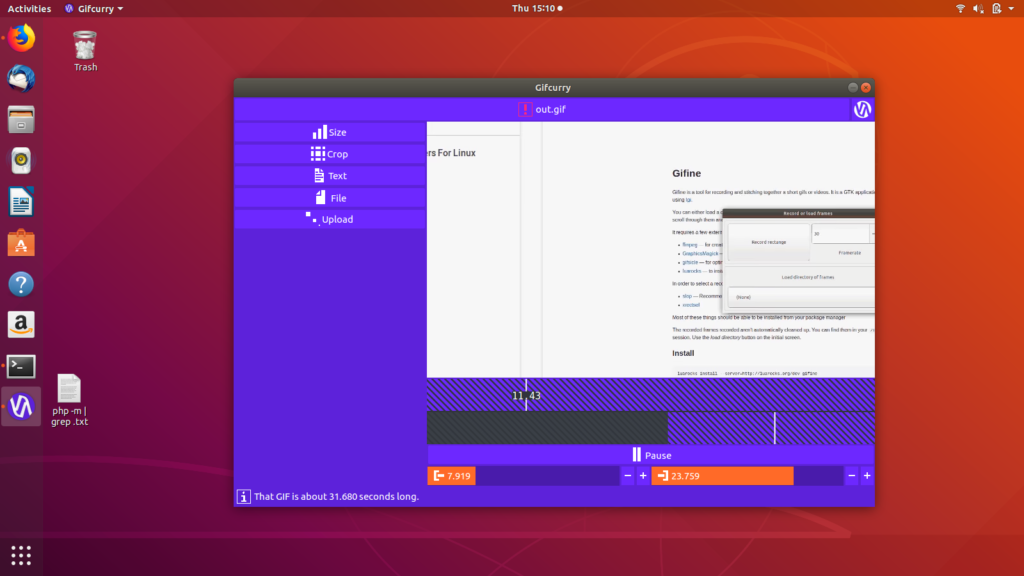