“Nginx, also abbreviated as “Engine-x,” is an open source Linux software that serves as a web server for HTTP caching, reverses proxy, and balancing of load. It proves to be a high-performance web server for its high-performance stability, HTTP capabilities, improved application-based deliveries, and security of the websites with the reduction of the long waiting times for the busiest web pages by acting as a load manager/balancer for the websites. Being a competitive lightweight server, Nginx offers a tremendous variety of features, and one of these features includes “Secure Service Layer (SSL)”. SSL is the technology that enables HTTP websites to secure the connection between the web server and web browser from any malicious attacks from unknown sources.”

In this article, we’ll learn the configuration of the SSL certificate in Nginx. Let’s accomplish this by following the detailed procedure provided below:

All the repositories are being updated here.

The next step after updating the server is to install the Nginx package from Ubuntu’s repository. Nginx is the default package offered by Ubuntu. The subsequent command should be entered into the terminal window to install Nginx:

After reading all packages from the repository lists, the system will then ask if you want to continue with the installation of Nginx or not, so for that, simply type (y), and the installation will then be completed successfully.

To ensure that the Nginx has been correctly installed in the system, use the following given command as shown below:

For Nginx, if the output returns the version of Nginx, then this means that Nginx has been installed correctly.

In this step, we are required to obtain the SSL certificate from the CA (certificate authority). Every website’s domain name is awarded one of these certificates by CA. Now we’ll generate the following CSR in Nginx using OpenSSL. This can be done by first logging into your server via terminal and running the following given command in the terminal window:

The process of generating the files has been started now; it will generate the following two files:

This file generates the CSR, which is then used later by the certificates to secure connections.

Now that we have installed all three files, including the Private key, CSR.file, and SSL certificate, we have to move a step further and have to link these SSL files. For this purpose, first, we have to create the new directory for these three files, and we can do it by writing the following given command in the terminal window:

Following step number 05, we will now configure the Nginx. We have configured the virtual host for the website with the domain name “www.example.com” separately here, so to configure this, we will run the following command in the terminal window: 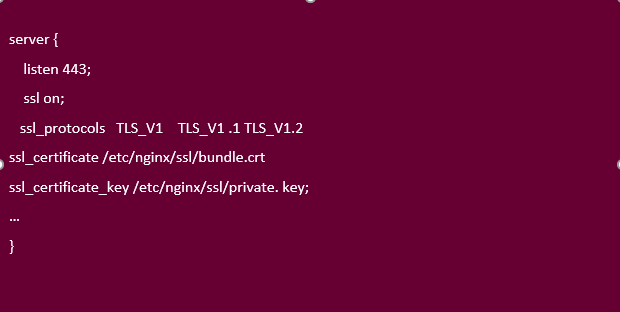 In the configuration shown above, the first line of the code is written to ensure that the server would always listen to port 443. The second line makes the Nginx server enable the SSL module. In the third line of the code, we have enabled the TLS version, which are the protocols of SSL, and they are supported by the Nginx server.

The last two commands in the codes talk about the specification of the file paths towards the bundle. Cart and private-key file (directory made for three SSL files linkage). We can make changes in the above code to make it specific for the server block named “www.example.com” as shown in the figure below: 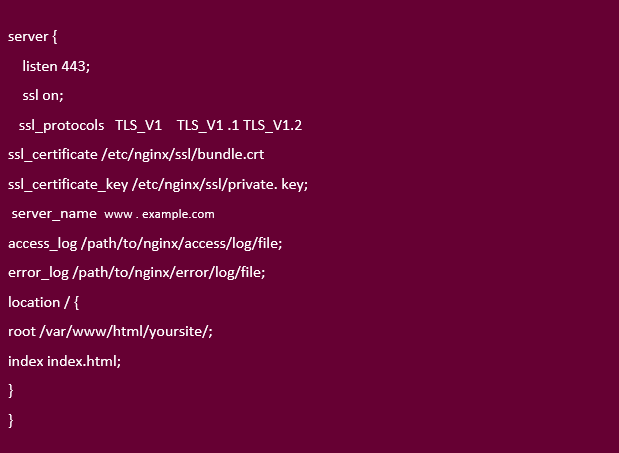 The following command would let the web-server restart.

In the last step, we would like to test the configuration of SSL that we have done for the Nginx server. For testing, navigate to the browser by typing the http//: domain; in our case, it is “https//: www.example.com”. It will redirect you to the URL “example.com” which means that SSL has been configured successfully and is functional, too sown in the figure below:

This guide represents the step-by-step procedure to Install and configure the SSL web server for Nginx. In this guide, we have learned how to obtain the SSL certificate from Certification Authority which are “Namecheap”, “Rapid SSL, “and “Comodo”. We have installed and configured the SSL using CSR and private key files (bundle. cart). After the successful configuration of SSL, we have run a verification test on it using a specific reference domain, i.e., www.example.com. We hope that with the help of this Guide, you will be able to configure the SSL on your systems as well.