The @classmethod decorator is indeed a built-in method decorator that is evaluated once your function has been declared. The outcome of that assessment casts doubts over your function definition. In the same way, an instance method receives the instance as an implicit first parameter; a class method gets the class as an implicit first argument. An implicit initial parameter is not passed to a static method. Static methods are connected to the class. The class state cannot be accessed or modified by a static method. It’s in a class, as it clearly explains why the method should be in a class. Now let’s look at some examples.

Here you can see the generated result.

Here is how you can call a static method. 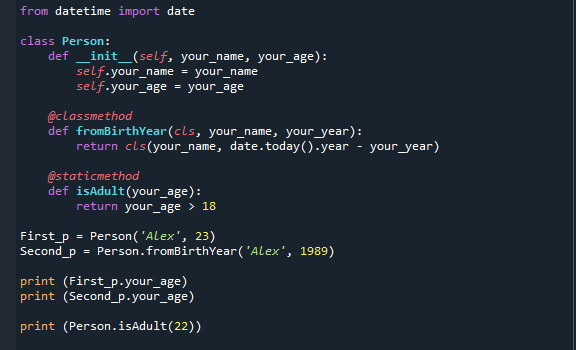 See the result below.

This tutorial covered the basics of class methods, static methods, and ordinary instance methods. A class instance is not required for class methods. They can’t get to the instance, but they can get to the class (cls). Cls and self are not accessible to static methods. Also, they operate in the same way as regular functions, but they’re in the namespace of the class. Static and class methods exchange information and (to some extent) enforce developer intent on class design. This even has the ability to be advantageous in terms of upkeep. You’ll be able to create object-oriented Python that conveys its goal more clearly and is easier to maintain in the long term if you gain an intuitive knowledge of their distinctions.