Python attributes are possessions related to a specific form of the object. The attributes of a particular item are the figures and features that are unique to each kind of object. Python objects are just a closed assortment of these features and figures and are intended to exist of a particular type. Let’s discuss some objects in Python and instances of each type.

When developing different programs, we more likely get errors and exclusions with any programming language. The errors prevent the program from running. One of the most common faults in Python is “Attribute Error”. The AttributeError is defined as that type of error that occurs when the orientation of the attribute. Python AttributeErrors typically occur when an unacceptable reference of an attribute is used.

Error is an integral portion of the life of a programmer. Also, there is no problem if any error occurs. Receiving any type of error means that we are getting information about something new. However, we have to fix these errors. Before we fix any error, we need to recognize why this error occurs. Python has different errors, such as attribute errors, type errors, and key errors.

This article describes in Python what an attribute error is, why it happens, and in what ways we fix it. Whenever we call or access an object’s attributes, the Python interpreter throws an attribute error, but the item doesn’t have that attribute. In Python, certain common mistakes cause attribute errors.

If we want to access any element not present in this object, we will acquire an AttributeError. In this instance, we take a variable “x”. We give the value 8 to the variable “x”. We are using lower() to create the string lowercase.

For carrying out the Python codes, we installed the Spyder5 program. For code, we have to create a new project by tapping the “Ctrl + N” from the keyboard. The name of the new file is “untitled42.py”:

Now, we choose the “run” selection from the menu bar for running the code. An AttributeError will occur when we use lower() on an integer. Since 8 is an integer, lower() is not appropriate as shown:

We alter an integer to lowercase here, but this is not possible because integers are not case-sensitive. However, if we try to use this lower() on a string, we get the output because that string is an upper case or lower case.

Here, we see what will happen if we execute the append() function with a data type further than List. We try to add one string to another when we concatenate any two strings, which is impossible. So, an AttributeError will occur:

When we are trying to access an element of a class that is not in the class, there are two classes in this code. First-class is the girl class and the second one is the car class. Both classes have some properties: 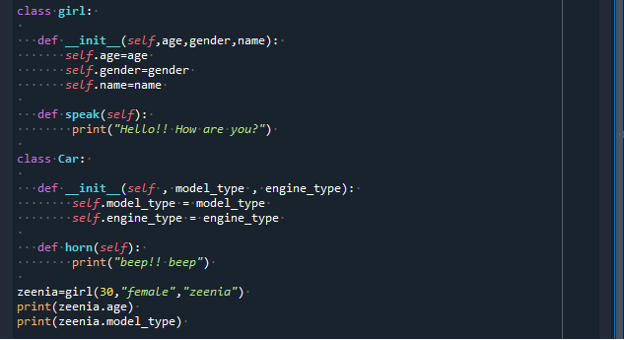 The class “girl” has the arguments: age, gender, and name. The class “car” contains arguments: model_type and engine_type:

If we obtain “None” as an alternative to the case we think we are getting, we will get a NoneType AttributeError. This means that the allocation is unsuccessful and returns an unpredicted result.

Here, we take the variable “label”. And we assigned the value “none” to this variable. We apply the loop here. We get a “nonetype” error because the nonetype object has no attribute “upper”.