The Pandas cov() method calculates the paired covariance amongst a DataFrame’s series. The DataFrame returned is the covariance matrix of the DataFrame’s columns. The computation automatically excludes NA and null entries. This technique is commonly used to evaluate the time series data to determine the association between various measurements across time.

The syntax for this method is as follows:

Here, the “min periods” determines the least number of occurrences needed for each pair of columns to provide a valid outcome.

You will learn and understand this method through the practical demonstration of codes in this article.

This illustration is about finding the covariance among the columns of a DataFrame. Let’s start learning its practical implementation.

The first and most necessary task is to find a tool that is compatible with your machine and supports the Python language. For our requirements, the “Spyder” tool is found the most appropriate. So, we have to download, install, and finally launch the tool. Once the interface is displayed, we open a new file by clicking the “file” button and choosing the “new file” option. A new file with the “.py” extension is opened. The “.py” refers to the “Python” file.

Now, start writing the Python code. Before we begin with our main code, we need to get some necessary libraries on this Python file. For the present topic, we don’t need many libraries but only a single package which is “Pandas”.  So, we write the code “import pandas as pd” which imports all the features of Pandas in our Python file. We can access them using the “pd” instead of “pandas” throughout the script.

Since we have to calculate the covariance among the columns of a DataFrame, we are required to have a Pandas DataFrame where we exercise this method. To construct a DataFrame, Pandas provides us a “pd.DataFrame()” function. As we already know that “pd” is the “pandas”, we access the Pandas method. The “DataFrame()” is the keyword of this function which, when invoked, creates a DataFrame. We generate a DataFrame using this “pd.DataFrame()” method and initialized it with three columns – “Alpha”, “Beta”, and “Gamma”.

Now, to store this DataFrame, we create a DataFrame object or a “grade” variable. This “grade” variable assigns the output generated from calling the Pandas “pd.DataFrame()” method.  So, when we call the “pd.DataFrame()” method, a Pandas DataFrame is created and stored in “grade”. We can access the DataFrame with this object. We generated the DataFrame and stored it. Now, what about displaying it? To display the DataFrame on the terminal, we have a very simple and handy “print()”method. This method takes the variable, function, or statement as its parameter and simply displays it on the terminal. We write it as “print(grade)” and it will display the DataFrame.

When we click the “Run file” button on the “Spyder” tool or hit the “Shift+Enter” keys, a DataFrame with three columns and six rows is displayed on the terminal.

The execution of the script explained previously gets us a matrix with calculated covariance between all the columns of the DataFrame “grade”. You can see that all the covariance values are positive. 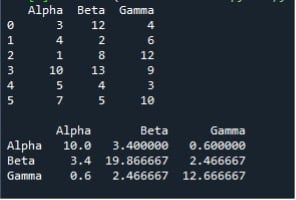 Now, we will see what happens when we have some “NaN” (Not a Number) values in our DataFrame and we need to calculate the covariance on that DataFrame. When the DataFrame has any “NaN” values, the “cov()” function ignores these “NaN” values and calculates the covariance between the rest of the values.

This is what our updated DataFrame looks like with NaN values.

We calculate its covariance now. We simply invoked the “cov()” function with the name of the DataFrame and passed this function as a parameter to the “print()” method to display the calculated covariance with “NaN” values.

When we run the previously-mentioned script, it displays to us the covariance calculated for all the columns in the DataFrame where, after ignoring the “NaN” values, the covariance between those columns having “Nan” values is negative. 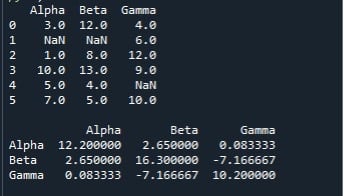 To create a series, we employe the “pd.Series()” function. Between its braces, you can define the values manually but, in our illustration, we create the series from the previously created DataFrame “grade”. So, we provide the column name with the DataFrame name between the “pd.Series()” function as “pd.Series(grade[‘Alpha’])”. Then, we store this series in a variable “v1”. We create another series with the same steps using the “grade” DataFrame’s column “Gamma” this time as “pd.Series(grade[‘Gamma’])” and store it in variable “v2”. 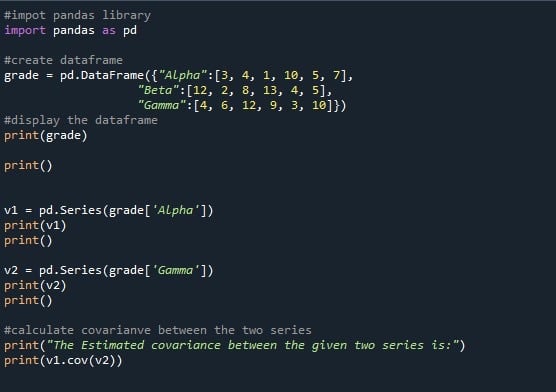 This yields us the following output with the calculated covariance between the two Pandas series. 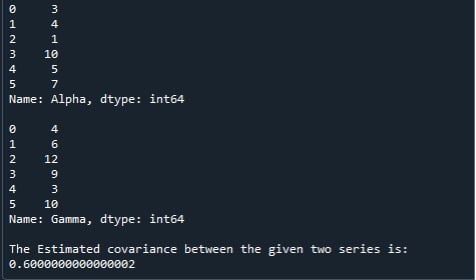