Methods for Adding Columns with Default Values in Pandas

In this tutorial, we will add the column’s constant value, utilizing the three different methods. These are what they are:

As we move toward the examples, we employ each of these approaches separately. We investigate each of the three methods in great detail in this tutorial by applying them to our codes. 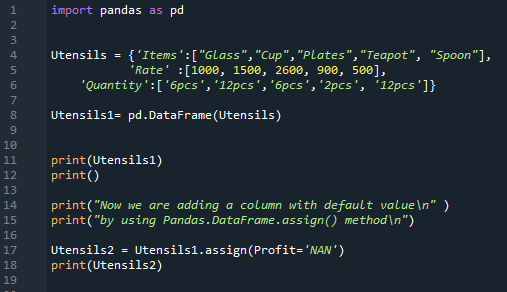 We get this output by simply pressing the “Shift+Enter” or you may use the “run” button. Notice that there are three columns here. The first and all columns and rows contain different values. But in the following illustration, we have four columns and the last “Profit” column contains the default value which is “NAN” in this example. 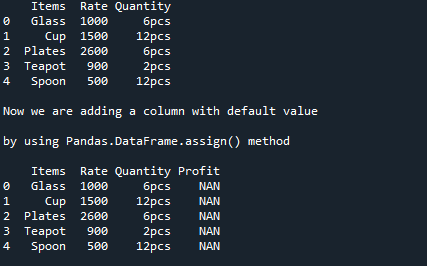 Now, alter them into a DataFrame by utilizing the “pd.DataFrame” and save it in the “Courses1” and print the “Courses1”. Also, print the two lines below this DataFrame. Now, we move to utilize the second method to add the column with the default value. We put the name of the DataFrame and then place the square bracket. In this square bracket, we place the name of the column that we want to add as we write it as “Course1[‘Discount’]”. Here, we first add the “Discount” column and put its default value as “NAN”. Then, we place the “Discount_percentage” below. Its default value is set to “0%”. To render this DataFrame, we utilize the “print()” method and place the “Courses1” in it.

The three columns are here in the first DataFrame. Each column and each row have a separate value. However, in the next DataFrame, the last two columns, “Discount” and “Discount_percentage” columns, have the default value which, in this case, are “NAN” and “0%”, respectively. There are five columns total. 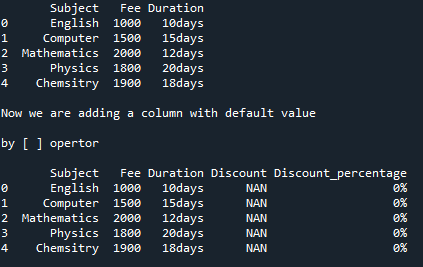 We utilize the third method which is the “Pandas.DataFrame.insert()” method. We place the position where we insert the new column which is “2”. The name of this column is “Payment”. We add the default value as “Monthly”. Then, “False” the “allow_duplication” in it. After this, we render this new DataFrame by utilizing the “print()” function.

Here is the outcome of this code. You can easily observe the difference between the first DataFrame and the second DataFrame. 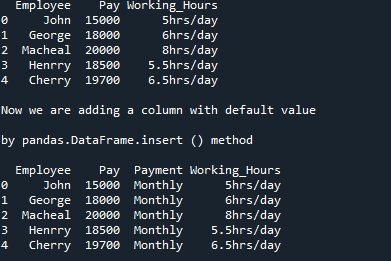 Now, we move to our last code here. In this example, we utilize all the three methods to add the column with the default value. After importing the “pandas as pd”, we use the “Data” variable and place the three columns with the names “Fruits”, “Vegetables”, and “Dry Fruits”. Also, add some fruits names, vegetable names, and dry fruits names in them and convert them into a DataFrame. 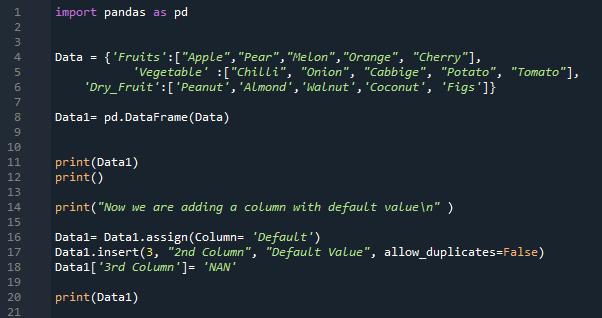 The result is presented here and all the three columns are added in the following DataFrame with the default value: