Python allows inheritance and even multiple inheritances because it is an object-oriented language. Classes can inherit from one another. A class can inherit characteristics and behavior-based methods from the superclass, which is another class. In other words, creating a new class by inheritance involves making minimal to no changes to an already existing class. A real instance is a specific reality of abstraction, or patterns, such as an object class or a system process, created through the instantiation process in programming. By defining a specific form of an object inside a class— assigning it a name and placing it in a certain physical location, for example— you can create an instance by instantiating it.

The starting point for the creation of objects is a class, which is a user-defined template or prototype. Data and functionality can be bundled with the help of classes. New object types can be created by adding a new class, enabling the creation of new instances of such types. To retain the state of each class instance, attributes can be linked to it.

Additionally, class instances may include methods for changing their state that are defined by their class. A class is instantiated when a clone of it is created, inheriting all variables and functions of the class. Python makes it easy to instantiate classes. Simply calling the class with the arguments specified by the __init__ method creates an instance of the class. The freshly formed object is what will be returned.

Programmers use the instantiation process to produce real instances, particular realities of abstraction, or patterns, like an object class or a system process. You can make an instance of an object by instantiating it, for instance, by defining a particular form of the object inside a class, giving it a name, and placing it at a certain physical location. Let’s declare an object of the class in the example below which is also referred to as instantiating a class.

We have defined a class with the name ‘Flowers’. Inside that class, we have created two attributes of this class. The first attribute is given the name val1 and initialized with the string. The second attribute is given the name val2. It is also initialized with the string value. Then, we defined a sample method in the class with the ‘def’ keyword and named that method ‘f’. The method takes one argument. Self serves as a representation of the class instance.

At the time of the compilation, the following outcome is obtained.

Example 2: Program of using a constructor to define the instance variable: 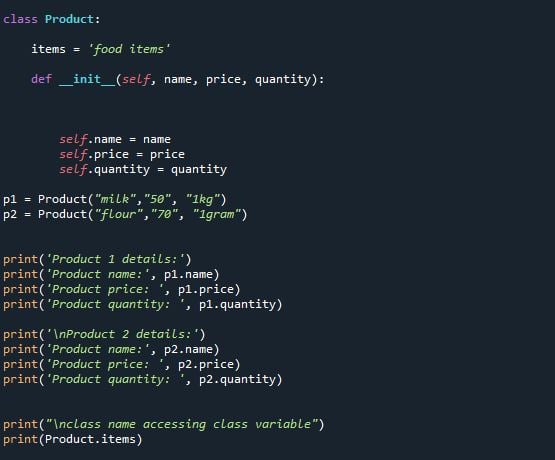 Here, we have defined a class as ‘products’ and we have created the variable of the class as items. The value of the string is used to initialize the class variable. Then, we have defined the init method, which is called the constructor, and take three arguments. The Java and C++ constructors are analogous to the __init__ method. Initializing the state of an object is done by constructors.

Like methods, a function constructor also includes a group of statements (also known as instructions) that are carried out during the formation of an object. It begins to run as immediately as a class object is created. The method can be used to initialize an object in any way you choose. We have created three instance variables name, price, and quantity inside that init method and assigned them string values.

After that, we have defined the two objects p1 and p2 of the class ‘product’. Then, we printed the values of the food items with the print statement. In the end, we have also accessed the variable of the class by invoking the class name.

The following is the output obtained from the above-implemented code.

Example 3: Program to define the instance variable inside the class:

The following example is utilizing the conventional method to define an instance variable. 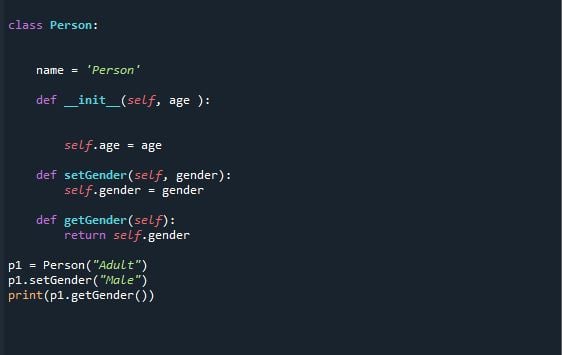 The instance variable value is displayed on the shell as shown in the below screenshot.

Now, you are familiar with instantiating a class in python as we have covered three different examples with different implementations. We saw that several characteristics might be accessed by using the class object. Additionally, it can be used to instantiate new objects belonging to that class. The process of creating an object is comparable to calling a function.