Docker is a series of frameworks that are using OS-level virtualization to provide applications in bundles called containers as service items. Containers are isolated from each other, and their programs, folders, and configuration files are packaged. They can communicate with each other via well-defined platforms. So, in this article, we will discuss how to install and configure Docker on your Oracle Linux 8 system.

Open your Oracle Linux 8 from your virtual box and login from it. Then, open your terminal in Oracle Linux 8 and make sure to login as a root user using the following sudo command:

It will ask you for your root user password, and you have to provide it to proceed with the further processes appended below.

If you have already installed some repositories of Docker, then you have to remove them using the affixed yum command:

Make sure to try these commands with sudo privileges, otherwise, it may not work properly.

Secondly, you have to install and download the configuration repository for Docker, which is docker-ce. Use the appended command below in your terminal using sudo initialization:

If you are unable to install Docker by using the above command, and you are facing some errors, there are some ways to resolve these. Try this command with the addition of the “allowing erasing” key at the end of it, as shown below:

You can also use the appended command below:

You can see your installation has begun. You have to wait for some time until it installs your Docker on Oracle Linux 8 successfully.

To start using Docker, you have to enable your docker service in Oracle Linux 8. For this, use the following systemctl command as a root user:

This command will enable Docker on your Oracle Linux 8.

It may also require authentication by asking for your password for the current user by which you are logged in. 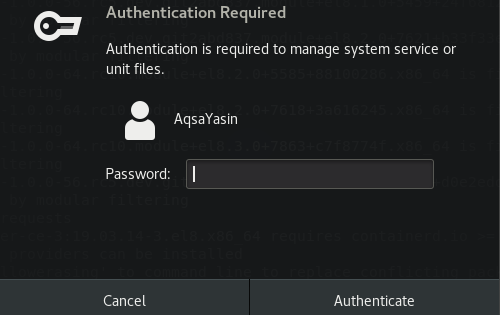 After enabling, you can start the Docker service by using the following systemctl command:

You can also check the status of your newly installed Docker service, whether it is working properly or not. To find out the status of Docker, try the below-mentioned systemctl status command in the terminal:

As clear from the image below that the newly installed Docker Engine is currently Active and running properly with no errors.

Luckily, you can check for the info of the Docker that has just been installed on your Oracle Linux 8. To do so, try the below command as follows:

Make sure to login as a root user first. Your system will display all the related information regarding Docker, as shown in the image.

Also, if you want to check the installed version of Docker on your Oracle Linux 8, use the command as follows:

Finally, your Docker is ready to use. If you don’t want to use a sudo account, then you have to assign the sudo privileges to another user to run docker commands. First of all, make a new user from the root account as follows:

Add the Sudo User to a Group

Add this newly created user in the /etc/sudoers file to make its entry clear, as follows:

After adding this user to the sudoers file, you have to create a group and assign it to the user that has just been created as a sudo user. To do this, use the following command:

We have used an alias in this newly created user’s bash_profile file to avoid any further use of sudo in your command.

It may ask for your password to confirm your action. As for our case, we did not set a password, so it will not ask for docker_user password, as shown below.

Now, you can finally start using Docker through different commands as a sudo user.

We have discussed and learned about very simple and efficient methods of installing Docker on Oracle Linux 8. In this article, we have educated ourselves about the basic installation and use of Docker. Hopefully,  this article has facilitated a lot to make you understand Docker installation and its use.