Kazam is considered a more liked screen capturing and screenshot tool for Linux users. It is used to capture a complete screen, a selected area or specific window. Moreover, it can record desktop videos with control over audio streams, you can manage their audio level. Using hotkeys, users can start, pause, resume, and finish video recording. These recorded videos can be played on any Linux media player.

The latest update of Kazam can control even mouse and keyboard presses. It is effortless and comes with a convenient, user-friendly interface. Other notable features of Kazam utility are, it has a time recorder, can resize selected areas and capture mouse cursor.

How to Install Kazam on Linux Mint 21

In this blog, we will explain the installation process of the Kazam tool on Linux Mint 21. For this, update the system repository by making use of mentioned-below command:

To check which version is of Kazam utility is installed in our system, type:

To get started with this screen recorder tool, execute the following command in terminal: 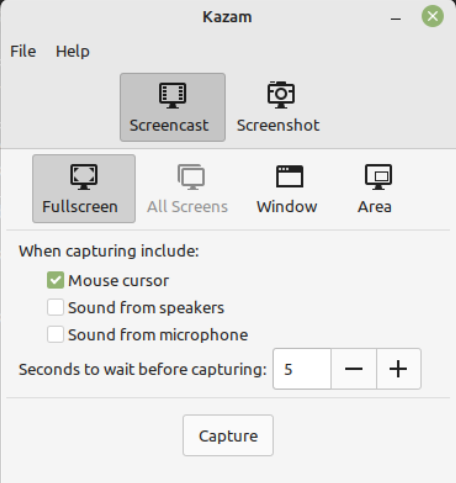 How to Uninstall Kazam from Linux Mint 21

Kazam is the screen recorder and screen capturing utility used among Linux users. By making use of this tool, you can make videos, resize their screen size with audio streaming. When using its hotkeys, you can start, pause, resume, and finish video recording. These recorded videos can be played on any Linux media player. You can install Kazam on Linux Mint using apt package manager. This article also mentioned a method to remove this app from the Linux Mint.