Stepper motors is a type of DC synchronous motors that divides their rotation cycle into several small steps. There are many applications for them, ranging from 3D printers to CNC machines. Stepper motors are important where precision and accuracy of moving objects is required. Using Arduino we can control stepper motor movement very easily, which helps in building multiple robotics projects such as human robots. Now, let’s discuss how many stepper motors we can integrate with a single Arduino board.

Stepper motors can be controlled with a high degree of precision without any need for a feedback system. These motors can divide their complete rotatory cycle into several small discrete steps according to the digital input received from the Arduino board. Each digital pulse from Arduino can change stepper motor motion into the number of steps or fraction of complete cycle commonly referred to as “micro stepping”.

Difference between these two motors can be told by looking into the number of output wires they have. Unipolar stepper comes with 4 wires, and it is most used, while Bipolar stepper motors have 6 wires output.

To read more about how we can connect a stepper motor with Arduino click here.

Now we will move towards the main part to find out how many steppers motors Arduino can support.

How Many Stepper Motors Can Arduino Control

Arduino can control as many stepper motors as you want, it all depends upon the board we are using and number of input output pins available in an Arduino board. Arduino Uno has a total of 20 I/O pins available out of which 14 are digital and 6 Analog pins. However, we can also use analog pins to drive a stepper motor using a motor driver.

Using the A4988 motor driver module it takes up to two pins to drive a single stepper motor, which means Arduino Uno can support a total of 10 steppers motors all at once. The 10 motors also include the Tx and Rx pins on Arduino board, remember while using these pins we cannot upload or debug Arduino sketches anymore. To avoid this, communication pins should remain free so serial data transfer can be possible at any time.

A single Arduino can control several stepper motors. It all depends upon which motor driver module we are using with Arduino. Arduino pins play an important role in controlling multiple stepper motors.

As mentioned earlier, if we use the A4988 motor driver module with Arduino Uno, it has the capacity of controlling up to 10 motors. These 10 stepper motors also include a connection at serial pins Tx and Rx. While these two pins are in use Arduino cannot serially communicate anymore.

A4988 motor driver takes only two pins STEP and DIR. These pins are enough to drive a single stepper motor easily. If we connect multiple steppers with Arduino, then each of them requires a separate motor driver module.

Here in the circuit diagram below, we have connected 9 stepper motors using A4988 module. All of them taking two control pins from Arduino. 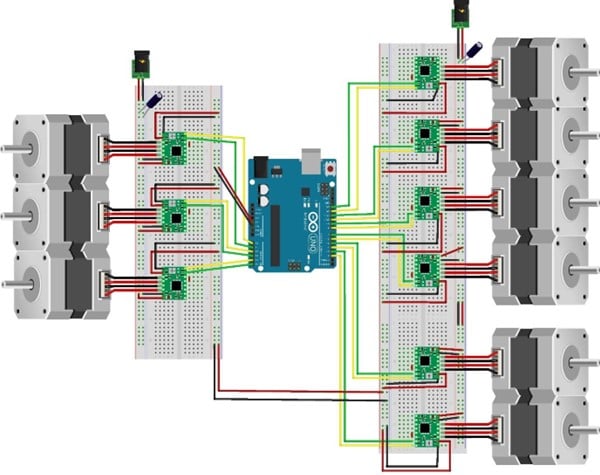 Another way of controlling multiple stepper motors is by connecting multiple Arduino boards using I2C communication protocols. I2C has an advantage of Master-Slave configuration which allows one device to control many without any need of external peripherals and wires. By using I2C we can increase the number of Arduino boards which result in providing more pins. All these pins can control stepper motors very easily.

Below diagram illustrate how Master-Slave devices are connected and by limiting number of wires how we can control multiple stepper motors.