Python is an incredibly flexible language for working with numerical data. The ability to work with both actual and fictitious numbers is also supported. We frequently have to execute computations on numeric data types, including complex numbers, when engaging in data science, deep learning, or scientific computations. More information on imaginary numbers and how to use them in Python is covered in this session.

Complex numbers are frequently seen in pairs and are utilized to find the square roots of the negative numbers. Python can effectively handle numbers and their associated functions in addition to the real numbers by using the “cmath” file. Python offers helpful capabilities to manage and modify the complex numbers which are valuable in many applications connected to mathematics.

Syntax of the Complex Number in Python

The following syntax of the complex number is utilized in the Python language:

In the same way that you would call the functions on the other numbers in Python, the complex numbers are supported in arithmetic expressions. It produces beautiful syntax that resembles a math textbook in several ways.

Example 1: Program to Convert the Complex Number to A Real Number

The “x + yi” is the symbol for a complex number. Using the complex function, Python transforms x and y from real values into complex (x,y) values. Using the real() function, the real portion may be retrieved and the imag() function can be used to represent the imaginary portion.

They can see the real and imaginary complex numbers in the following image:

The phase complex number is generated on the following console screen:

Example 3: Program to Convert the Complex Number to Rectangular Coordinates

Using the polar() function which returns a pair(r,ph) indicating the modulus r and phase angle ph, the polar data is converted. Abs() and phase are both functions that can be used to display the modulus().

The rect(r, ph), where r is the modulus and ph is the phase angle , translates a complex integer into rectangular coordinates. It gives back a number that is equivalent to r * (math.cos(ph) + math.sin(ph)*1j). 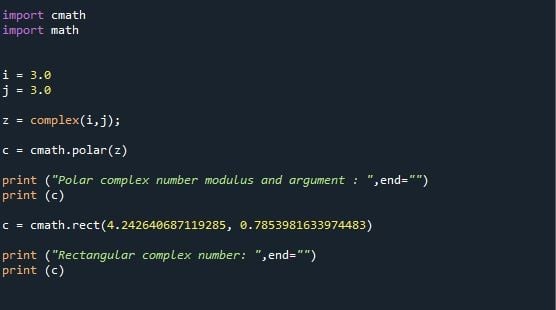 The results of the polar and rectangular complex numbers are shown as follows:

Here, we explain the complex number of trigonometric functions: 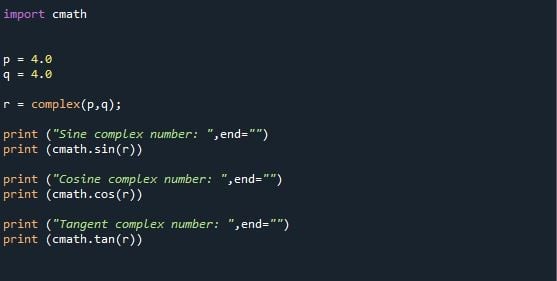 The output obtained from the previous Python script is as follows:

Here, we discussed some operations of the complex number which include the exp() function and the log() function.

exp(): The complex number indicated in its argument’s exponent is returned by this function.

log(a,b): When both of the inputs to this function are specified, it gives the logarithmic result of “a” with “base b”. The natural log of “a” is produced in the absence of a base argument.

The outcome of the previous script is as follows: