Several reasons might occur when you need to know about ports in the system. It could be when you are facing network issues or having security problems while using the Linux operating system. Besides such issues, if you want to upgrade the security level of your machine, you should know about opened port details.

There are different types of ports in a system i-e Transmission Control Protocol (TCP) and User Datagram Protocol (UDP).

TCP is the most used protocol on the internet while UDP is a replacement for it if you don’t need to look for error-related issues while transmitting data.

In Linux distributions, we have several command-line tools introduced by the Linux system to display open ports on the terminal. Some of the most used and easy utilities are listed below:

The netstat is the most powerful and popular command-line tool among Linux users to monitor networks. Let’s use this command to display all open ports including TCP and UDP on terminal: 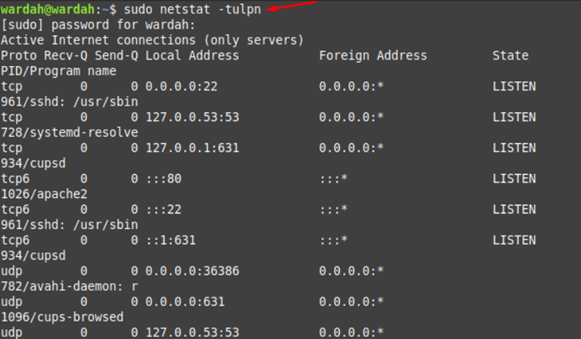 In the above command:

t: used for TCP ports
u: used for UDP ports
l: used for listening server sockets
p: used for PIDs and
n: used for not to display names

The ss command-line tool is another way to find open ports in Linux systems as it provides more information about the network than netstat command tool. To display open ports with the help of this command, run in terminal: 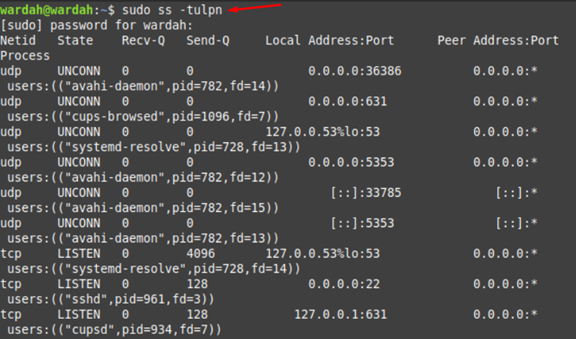 As the name describes List Open Files (lsof) helps to display the open files in the system. We can also use this command-line tool to show open ports in the terminal, so type to get the required output:

The grep Listen command will help to display all open ports.

The nmap command-line tool is used for network auditing and exploration but is also helpful to detect open ports. It is not the built-in command in Linux distributions, so before making use of it, we need to get it on the system, type the mentioned installation command:

As it is downloaded to our Linux Mint system; now run the following command to display all TCP port connections on the terminal with the help of nmap command tool:

To display all UDP port connections on the system, type in terminal:

Letting know about your open port connections is necessary when you find troubleshooting and security issues in the network. Or in another case, if you want to upgrade the security level of your machine, you should know about open ports details.