There are many ways to show your Kubernetes cluster’s app to the outside network. You just have to choose the best one for your needs. NodePort, Ingress, LoadBalancer, and ClusterIP are the four key choices.

ClusterIP: The standard Kubernetes service is ClusterIP. This functionality is created within a cluster and is only accessible through pods within that cluster. So, whenever we want to disclose a service to other pods in the very same cluster, we use this sort of service. The Kubernetes proxy is used to manage this service.

NodePort: Each node in your cluster has an open port called a NodePort. Even if your program is installed on a different node, Kubernetes straightforwardly routes traffic coming on the NodePort to the application.

LoadBalancer: In Kubernetes, the far more basic form of load balancing is load distribution which is straightforward to fix at the dispatcher stage. Kubernetes has two load distribution channels, both of which are regulated by a function called Kube-proxy which handles the virtual IP addresses used by applications.

Even though Kubernetes was first issued in June 2014, the Kubernetes Ingress API is still in beta as of Kubernetes version 1.18. The Ingress API has concentrated on adaptability and remained relatively compact since its launch to beta status in 2016 (Kubernetes v1.2).

Kubernetes Ingress is a Kubernetes API entity that offers routing rules for managing outside users’ accessibility to Kubernetes cluster services usually via HTTPS/HTTP. You can easily create guidelines for traffic propagation with Ingress without having to create a series of Load Balancers or expose each operation on the node. As a result, it is the right option for use in production settings.

In this guide, we will elaborate a method in which you can easily enable the Ingress controller using minikube.

Note: We are working on Ubuntu 20.04 LTS while writing this guide. You can use your favorite operating system for implementation.

Initially, you have to create a minikube cluster to enable the Ingress controller in Kubernetes. For this particular purpose, we have to launch the command line terminal in Ubuntu 20.04 LTS.

You can launch the terminal window with the help of two simple methods. One of them is to open it using the Application bar of your operating system. The other option is to use the easiest shortcut key of “Ctrl+Alt+T”.

As soon as you follow either of these methods, the command line terminal shall open.  First of all, you have to start the already installed minikube cluster in your Ubuntu 20.04 LTS operating system. To start minikube, write down the below-mentioned command in the command-line shell.

From the above-displayed image, you can check that the host, kubelet, and apiserver are all running. 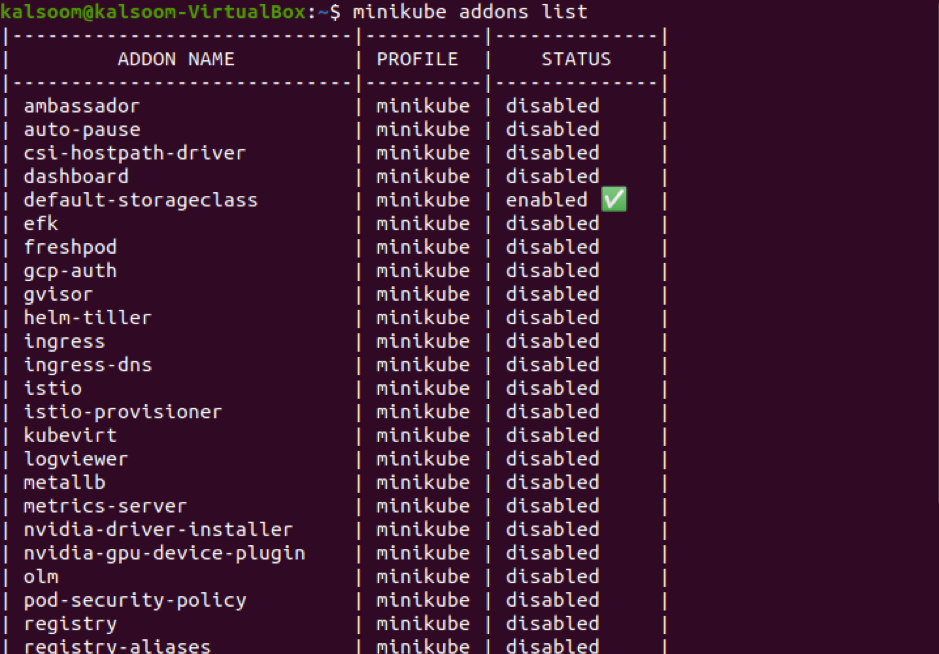 After the execution of this command, you will see the status against every addon of minikube. Some of them are enabled and some are disabled. Now, this is the right time to enable the Ingress controller using minikube. So for this specific purpose, you have to write the below-written command in your terminal window.

As this command has the keyword “enable”, so it will enable the Ingress controller in Kubernetes.

After the execution of this command, you can now view that the “The ingress addon is enabled”. If you want to verify this, you can execute the below-mentioned command in the terminal with the –n flag.

You can view that now the status is running.