MongoDB is a widely used non-relational database management system. The data storing mechanism of MongoDB (or any other database) strongly relies on the data types supported by that database management system. MongoDB stores data in the form of BSON, which is a binary-encoded format of JSON as its name is also derived from “Binary” and “JSON”. The data types that BSON supports are considered valid for MongoDB.

This article of the MongoDB series will provide detailed information about the data types used in MongoDB. But before that, let’s have a comparison of JSON format and its binary extension BSON.

BSON is a binary extension of JSON that is machine-readable and is used for storing data. The data can be stored using BSON by specifying a field name(usually specified as a string) and then assigning it a value(can be any type supported by MongoDB) BSON consumes more space because it stores extra information as well (like the length of the string) but its execution is fast. Moreover, the number of data types supported by BSON is greater than JSON.

What are the data types supported by MongoDB?

This section contains the assignment of several data types to field values in MongoDB. An example for storing each data type is also provided.

Note: The collection name is “Authors,” and we have printed each document by using find with pretty methods in MongoDB. The find() method prints the result, where the pretty() method prints that result in an esthetically sound manner.

String: The string value can be stored to any field by representing it inside double quotes(” “). The following command will insert a document that contains a string field in the “Authors” collection:

Or you can also insert by creating a string variable first and then calling that variable into a MongoDB document.

Insert into a document:

Integer : The integer (float values are not included) value can be inserted in MongoDB by the following way:

Arrays: A set of values can be stored in MongoDB using an array; this data type can store several fields that contain different data types: 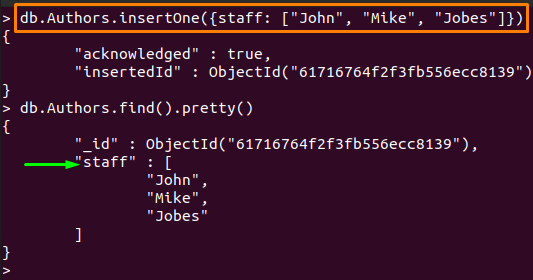 To create an object variable:

Inserting it into another document: 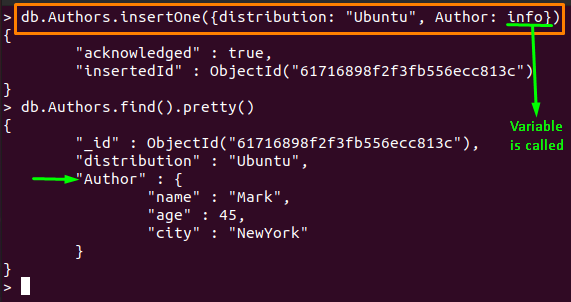 Note: In object data type, the variable creation is not necessary, but it is recommended because sometimes complex documents may need extra time to string an object directly.

Undefined: This data type helps to store values that are undefined. For instance, you can store a field (to remember) whose value is not defined yet, and later you can replace it. The following command helps to store an undefined value to field in a document:

ObjectId : Every database stores data with a unique identification number. In MongoDB, the ObjectId() can be used to assign a unique id to the document by using the below mentioned command:

Note: If you forgot to assign a unique id to a document, then MongoDB automatically assigns it.

Date: This data type can be used to store the current date and time. Moreover, this data type has the following extensions:

Date(): This type of Date will return the answer in string format. And it can be declared by following way:

ISODate(): This type returns a date object, and it uses the ISO date wrapper to display the field.

Timestamp: This data type can be used to put a timestamp in a document which is very useful especially when you keep on updating databases regularly. The example to put Timestamp is given below:

Min and Max key : The MinKey and MaxKey compare the minimum and maximum values in the BSON element. These types are referred as internal data types: 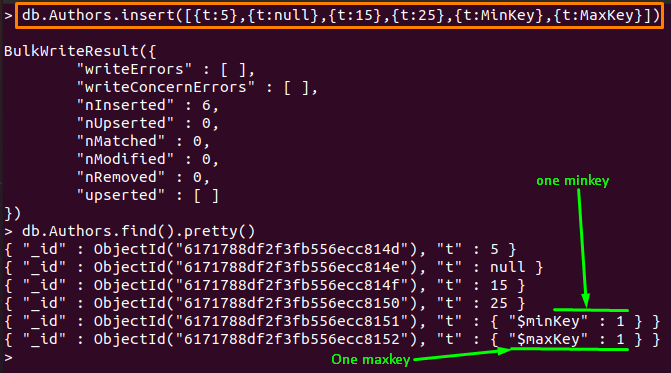 To store a regular expression in a variable:

And now the variable is called to store it in a document:

Note: The regular expressions can be super useful in searching a piece of string from several fields in a collection.

The data type support plays a key role in processing data inside any Database Management system. MongoDB supports all types that fall under the umbrella of the BSON type. In this article of the MongoDB series, we have compiled a list of valid data types in MongoDB. Moreover, each data type is described, and an example is quoted for better understanding as well. If you have used MongoDB or plan to use it in the future, this post would be beneficial for you to get a birds-eye view of data types in MongoDB.