Benchmark and stress test methods are often used to gauge the performance of desktop PCs and servers. These tests are also useful in finding hardware problems and system anomalies that are observed only when a system is under heavy load.

This article will list various utilities to perform CPU benchmarks and stress tests on your system. While many of these apps provide options to test other hardware components as well, this article will focus on CPU tests only.

HardInfo is a graphical utility for Linux that displays information about various hardware components in your PC like processor, RAM modules, sensors, hard drives and so on. It also supports exporting a detailed report about your system in txt or html format so that you can share it with your friends, compare it with other systems or use it for debugging purposes.

Besides showing general information about your system, HardInfo provides a few benchmark tools to measure the performance of your hardware. As far as CPU benchmarking is concerned, it includes five methods: CPU Blowfish, CPU CryptoHash, CPU Fibonacci, CPU N-Queens and CPU Zlib.

To install HardInfo in Ubuntu, run the command below:

To run a CPU benchmark, click on any benchmark method under “Benchmarks” section, as shown in the screenshot below. 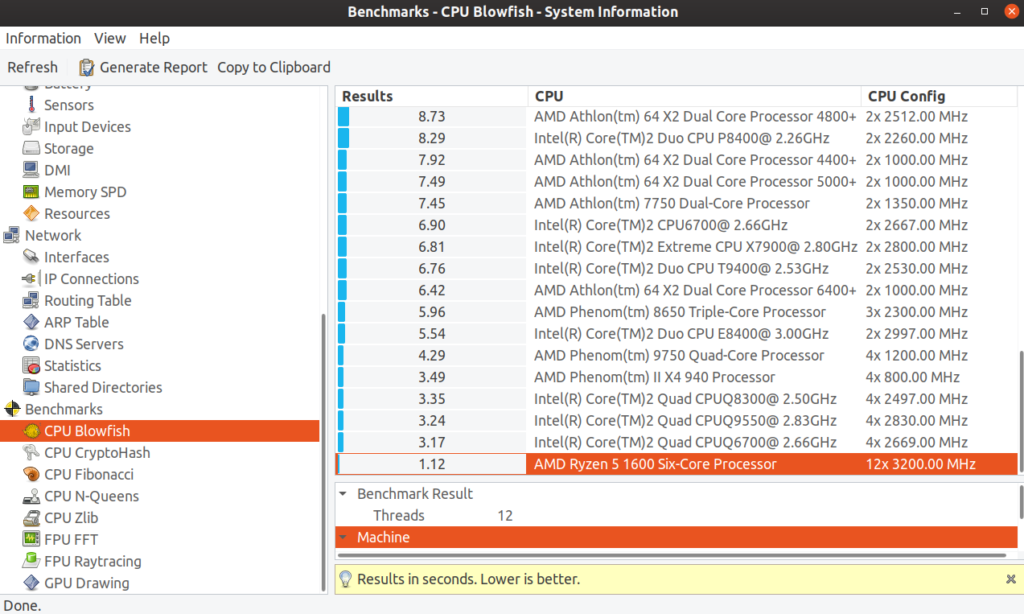 Once the benchmark has finished, HardInfo will tell you if a lower or higher score is better. It also displays scores for CPUs made by other vendors for easy comparison.

Sysbench, as the name suggests, is a command line app to run benchmarks on your system. Written in Lua, Sysbench is mainly intended for doing database benchmarking. However it includes options to test CPU, memory and file throughput as well.

To install Sysbench in Ubuntu, run the command below:

To start a benchmark using Sysbench, run the following command:

You can use other command line switches to customize the benchmark behavior. More details about these options can be found here. 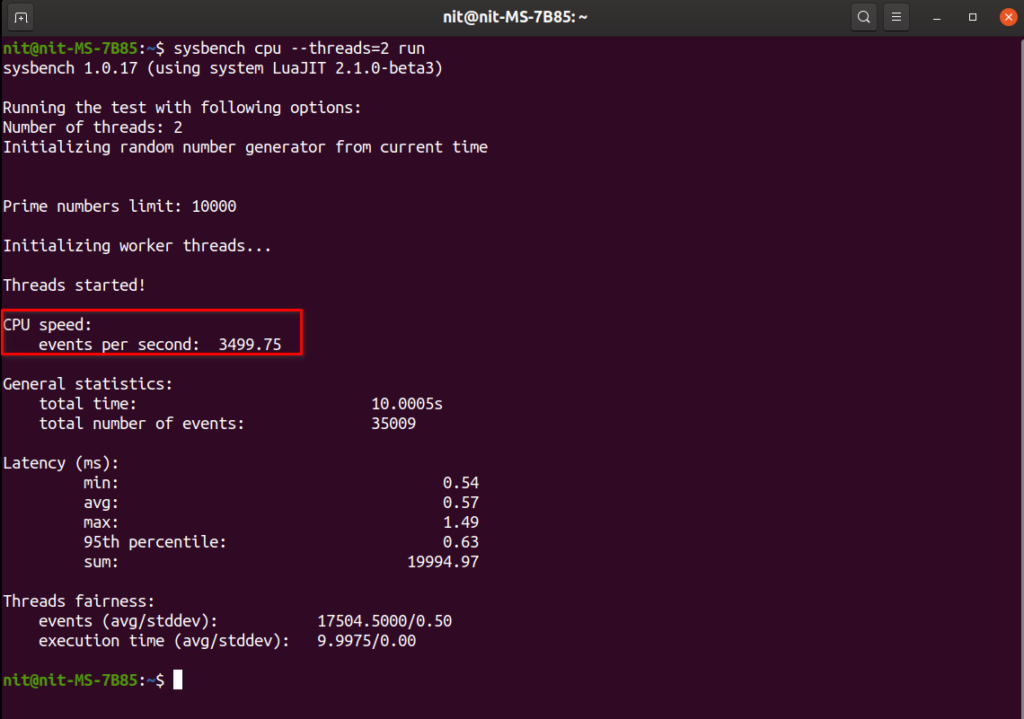 Once the test has finished, you can use the “events per second” variable to gauge the performance of your CPU. Unfortunately unlike HardInfo, Sysbench does not provide benchmark results of other CPU models made by various hardware vendors out there. If you have multiple computers, you can run the test on both and then compare the numbers. Higher is the number of events per second, better is the CPU performance.

You can install stress in Ubuntu by running the following command:

Note that Stress will not run any benchmark test on your system, instead it will consistently hammer the CPU and make it run at 100%. You are advised to close all the running apps before doing a test. Running Stress for a longer period can crash the system and you may need to do a hard reboot to recover the system.

You can start the stress test by running the command below where “cpu” refers to the number of threads used for performing the test. To stop the test anytime, close the terminal or press <CTRL + C> to make it stop. 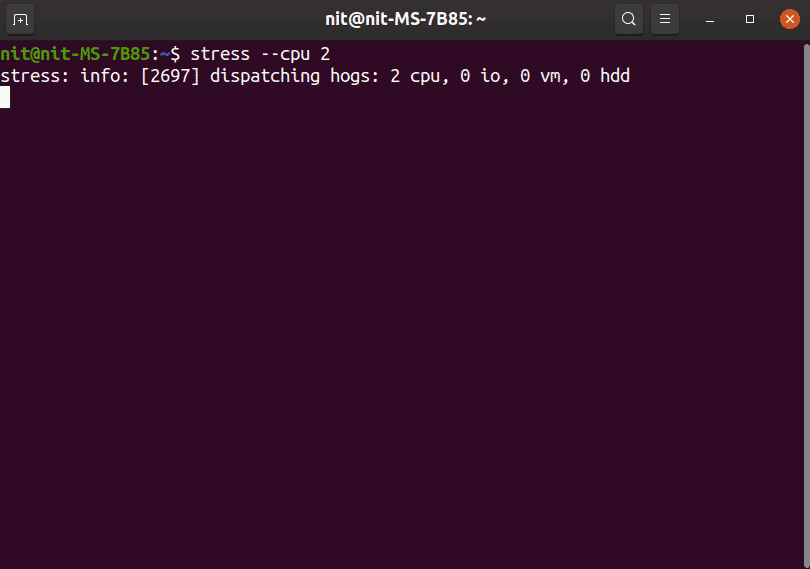 I used Stress extensively when I built a new PC for myself a year back. It helped me greatly in tweaking fan speeds in BIOS for improved cooling.

Stress-ng is an updated implementation of Stress tool mentioned above. It is much more advanced and includes hundreds of tests to put a load on your system.

You can install Stress-ng in Ubuntu by running the command below:

Note that the warning mentioned above applies to this tool as well. Running stress-ng for a long time can freeze your system making it recoverable through a hard reboot only.

You can start the stress-ng test by running the command below where “cpu” refers to the number of threads used for performing the test. To stop the test anytime, close the terminal or press <CTRL + C> to make it stop. 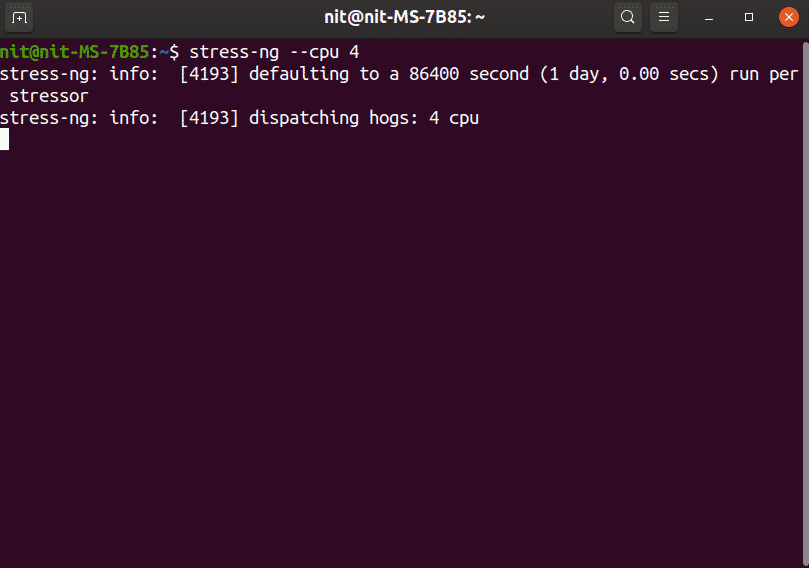 It is possible to customize the command using many other command line switches, but explaining all of them here is beyond the scope of this article. You can explore these options from here.

S-tui is a CPU resource monitor that uses a terminal based graphical interface to display data and graphs.

It supports CPU stress testing using the Stress app listed above while giving you a nice bird’s eye view on the various CPU parameters like frequency, temperature and utilization.

S-tui can be installed in Ubuntu by running the command below:

As it is just a terminal based frontend for Stress command line app, be vary of system lock up during high usage.

Run the following command to launch it. To stop the test anytime, close the terminal or press <CTRL + C> to make it stop. 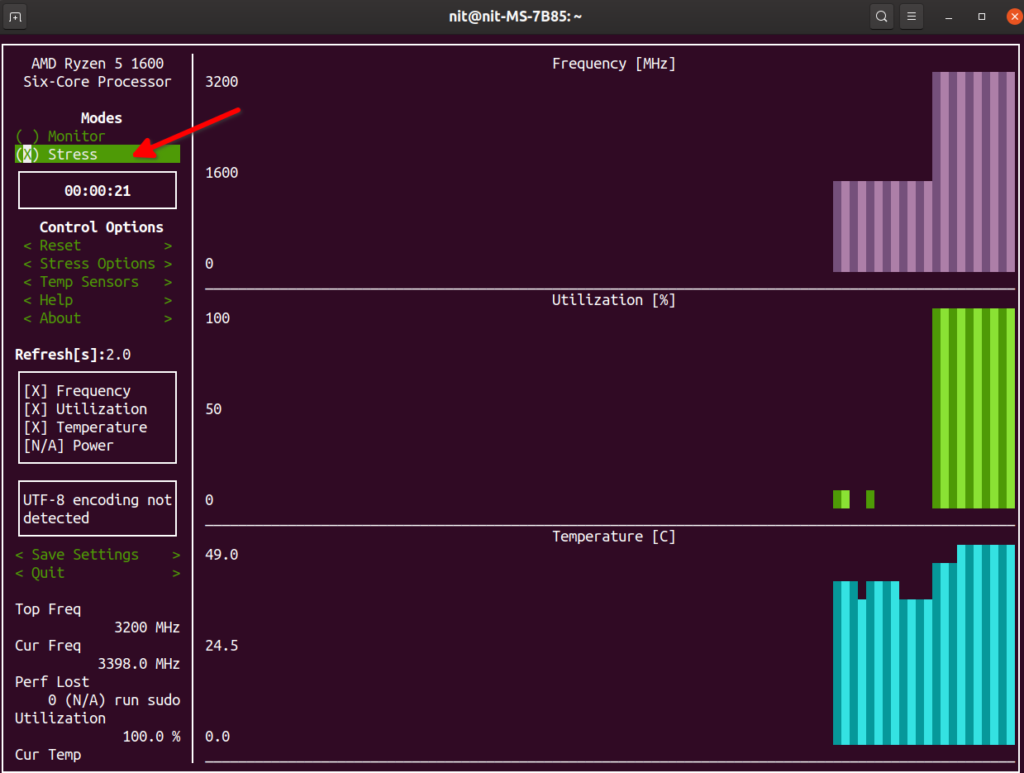 7-Zip is a file compression tool that can do extreme levels of compression on files and store them in a reduced size 7z archive format. 7-Zip comes with a built-in option to run LZMA compression benchmarks for measuring CPU performance.

To run single threaded benchmark, use the command below:

Multi-threaded benchmarking can be run by using the following command: 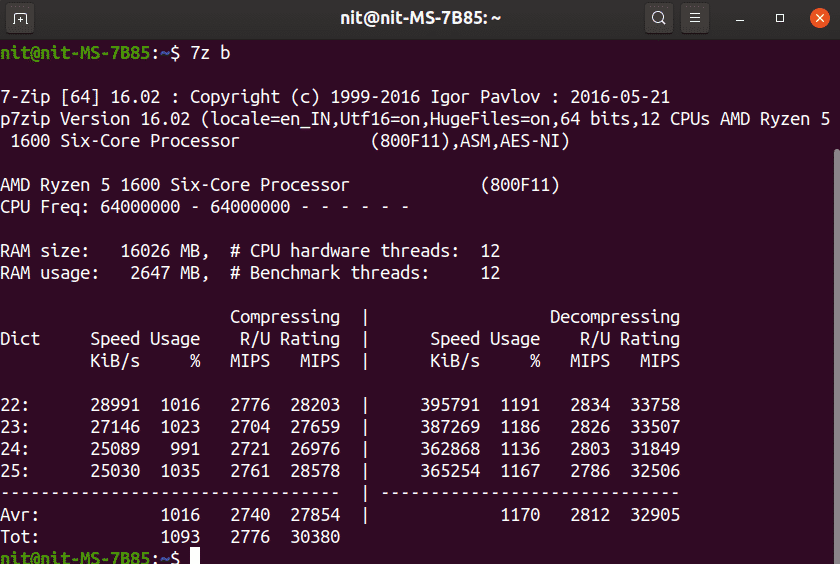 The results are in million instructions per second (MIPS). You can compare these results with other CPU models from here.

These are some of the free and open source utilities that can run CPU benchmarks on your system. In the good old days, running Flash Player in Firefox was an excellent way to stress test your CPU. These days, however, all the apps mentioned above do a pretty good job.