This tutorial explains how to connect and transfer files through the sftp protocol in Linux, as well as securing by implementing security measures.

This is one of the main command line tools to securely share files between computers. Additionally, to downloading and uploading files and directories, the user can remotely change permissions, remove, and rename files and more.

SFTP is a command which definitely will improve the networking experience from the command line.

After reading this article and applying examples (They also can be reproduced in a virtual machine), the reader will know how to configure Linux systems to transfer files with the sftp command, both in interactive mode and command line.

The content is valid for all Linux distributions and includes real scenario screenshots, making it easy for all readers to understand how commands are applied independently of the previous knowledge level.

Formerly FTP (File Transference Protocol) was the only method to transfer files between clients and servers or between two network devices.

Users used to upload all download files from FTP servers with permissions to read and write on the allowed directories.

But the FTP protocol suffered high risk vulnerabilities and was replaced with newer and more secure protocols. Two widely known examples are SCP (Secure Copy Protocol) and SFTP (Secure File Transference Protocol). SFTP is one of the most popular replacements for the FTP protocol.

Like FTP, SFTP can be used through an interactive text mode or by executing single commands. This tutorial explains both techniques.

Previous Requirements to Use sftp

The sftp protocol requires ssh (Secure Shell) to be installed and running on the server you want to download files from or upload files to.

If your server already has the ssh running, you can jump to the next sftp section.

On Debian based Linux distributions, ssh can be installed using the apt packages manager as shown in the screenshot below.

On RedHat based Linux distributions, ssh can be installed by executing the following command:

Once installed, on the server you want to connect to, start the service with the systemctl command as shown below (Debian based distributions).

To start the ssh service on RedHat based distributions, run:

How to Use sftp in Interactive Mode

The only command to be executed to access the sftp server before getting the sftp command prompt is the connection request, which has the similar syntax to ssh and scp.

The example below describes the correct syntax, where <User> must be replaced with an existing user on the server and <ServerIP> with the server host or IP address.

In the screenshot below, the local user linux-hint3 connects as the remote user linuxhint to the server with IP address 192.168.0.103.

The first time the user connects to the server, he will be requested to confirm the connection. The user must type “yes”, press ENTER and fill the password.

Once the user connects, the server will return an sftp> command prompt where the user can execute the sftp commands.

The sftp interactive mode allows users to interact both with the local and remote systems.

Normal Linux commands impact on the server. Commands starting with a “l” are executed in the local system.

In the screenshot below, the pwd command is executed to show the remote current working directory.

Then, lpwd is executed to show the local current working directory.

If the user runs the ls (List) command, it will show remote files and directories within the current working directory.

By executing lls (Local List), the command will show files and directories within the local current working directory.

The syntax to download a file from the server is the following:

In the example below, the user downloads the file named file10 and then runs lls (Locally List) confirming the file was properly downloaded.

To download directories, the syntax is almost the same except for the -r flag as shown below.

In the example below, the user downloads a directory named Directory1.

To upload files, the syntax is the following:

In the practical example below, the user uploads a file named <file>

To remove directories, add the -r flag as shown below.

The df -h command can be used to show total server space, used and available space.

Users can also change file and directory permissions with the chmod command as shown in the example below. 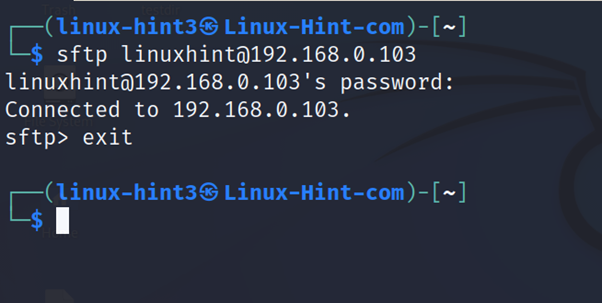 Another way to exit the sftp session is the bye command.

In the example below, the user logs in as the linuxhint5 user and downloads the targets.txt remote file to the local directory represented by a period.

In the practical example below, the user downloads the file named something2.txt located in the remote testdir/ subdirectory to the local Desktop/ subdirectory.

As shown in the example below, by adding the -r flag, the user can download directories recursively. In the following example, the user downloads the testdir/ directory to the local Desktop/ directory.

To upload files by executing a single command with sftp, apply the syntax below.

In the example below, the local File2 is uploaded to the testdir/ directory.

To upload a directory, add the -r option using the following syntax

In the example below, the Desktop/ local directory is uploaded into the remote perl5/ directory.

By default, sftp connections are safe and protected by the ssh protocol.

But one of the risks is the default password login method as a consequence of password weakness, which includes password exchange or password sharing channels, processes. In which, passwords may get leaked, for example, with a MiM (Man In the MIddle) attack followed by a successful description.

If the server is not properly configured, password login can expose the system to brute force attacks.

To prevent this, a good practice for small and medium size networks is to implement ssh key authentication and disable password login.

The sftp security is granted by the ssh protocol, whose configuration file is /etc/ssh/sshd_config, the file users need to edit to enable key authentication and disable password login among more options to reinforce security.

On the server allowing incoming connections, edit the /etc/ssh/sshd_config file with privileges using a plain text editor like nano or vi.

The root user is present in all Unix based systems including Linux. It is a bad decision to allow login in with a username with privileges known by everyone.

Don’t edit the options to disable password login yet, because the key sharing process requires password authentication before the system is able to authenticate with keys.

On the client side, requesting outcoming connections, generate the keys pair by executing the ssh-keygen command. 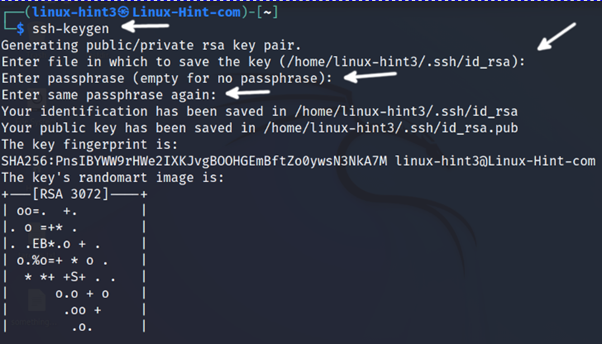 Now, the client must share the key with the server with the command ssh-copy-id using the syntax of the following example.

After sharing the key, test the key authentication method by connecting to the server.

If the authentication succeeds, the user will login without password. If the user defines a passphrase, it will be requested instead of the password as in the example below.

After checking the key authentication works, it is highly recommended to disable the password login.

On the server side, edit the file /etc/ssh/sshd/config again with a text editor like nano or vi. 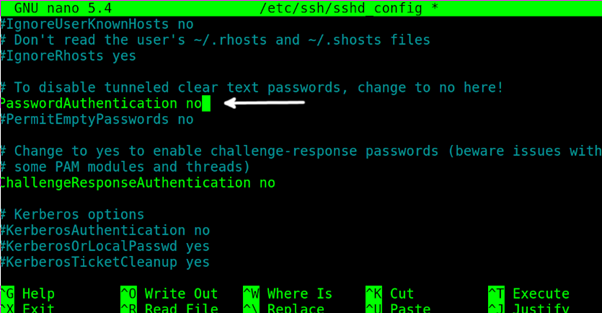 Sftp is a very useful tool to share files between devices and offers two simple modes. The sftp protocol can be installed on every operating system, offering security, reliability, and speed. Alternatively, the SCP command also offers reliability, speed and security and works through the ssh protocol. This second command was also deeply explained at Linux Hint (The link was given in the introduction of this document).