I was asked how to see all mount points in Linux. Even though I always did it for myself using the mount command, I was surprised when I found there was no more human-friendly way I could explain. Thus I decided to write a tutorial that includes different techniques to achieve it.

While running commands to get mount points information is pretty easy, dealing with the output may not be comfortable for some users. After reading this tutorial, you’ll know how to get different outputs through different available commands: cat, findmnt, mount and df. Yet no format is really human friendly.

To run it, simply just the command below.

To run it, simply just the command below. 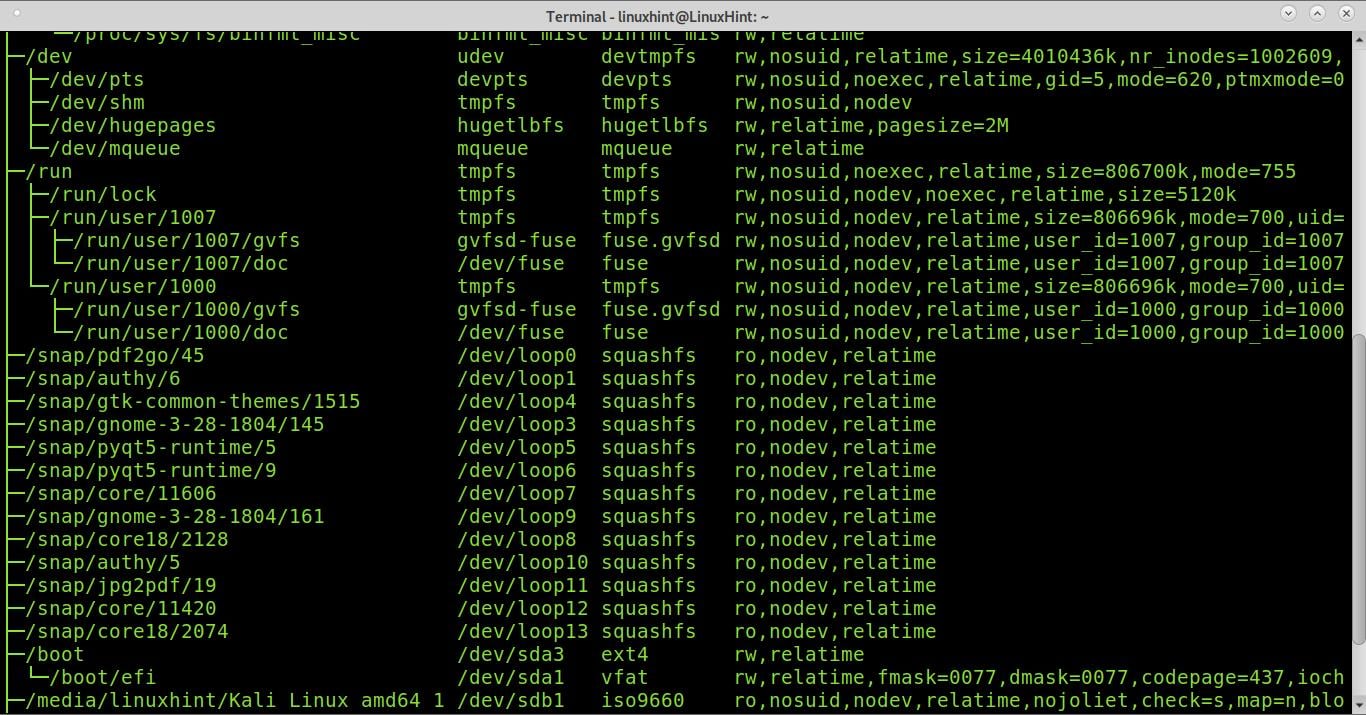 As you can see in the output, there are 4 columns:

The most accurate technique to see mount points in Linux is reading the /proc/mounts file using cat. This is also the less human-friendly way, with the worse visual output.

To see all mount points using cat, run the command as shown below. 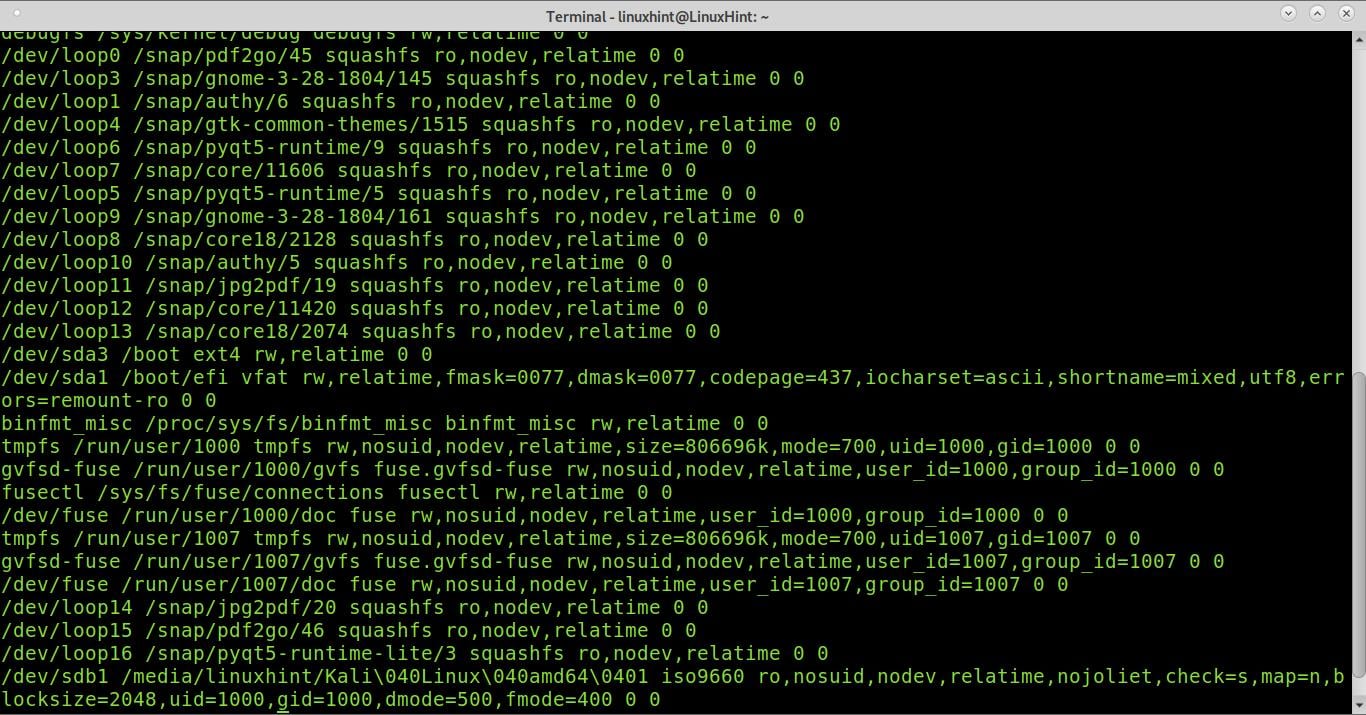 As you can see, the output isn’t user friendly, but it is considered the most accurate method to check mounted devices in Linux.

The mount is probably the most known command explained in this tutorial. Once we needed to run it every time we wanted to mount a device, it wasn’t automatic like today. By running it, you’ll get an output with all mounted filesystems. If followed by the -l flag, it will also show the mount point name; the output is similar to the mount command without flags. 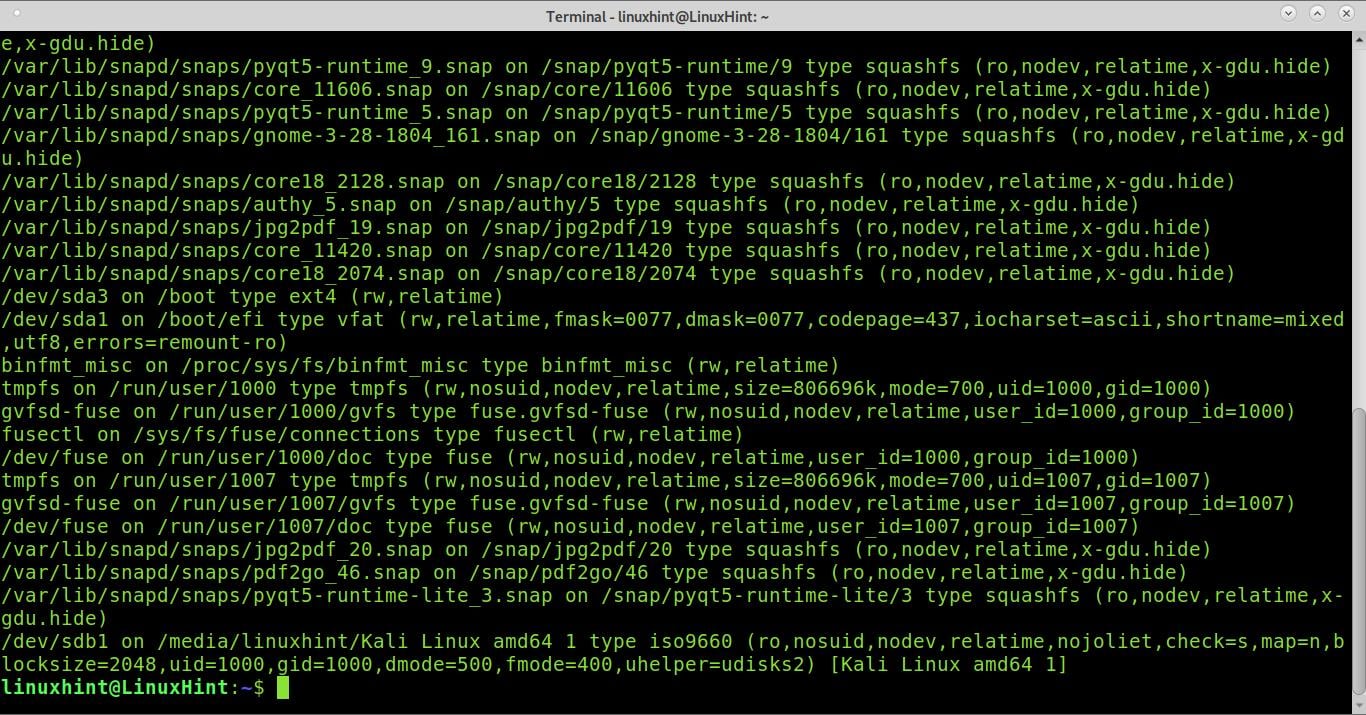 As you can see, in the last two lines, there is a mounted pen drive containing a Kali Linux distribution.

You can read more about mount at https://en.wikipedia.org/wiki/Mount_(Unix).

The df (Disk Free) command is also useful to print all mount points. The df command is mainly used to show available and used space on all storage devices.

To get an output with all mount points using df, just run it without additional options, as shown below. 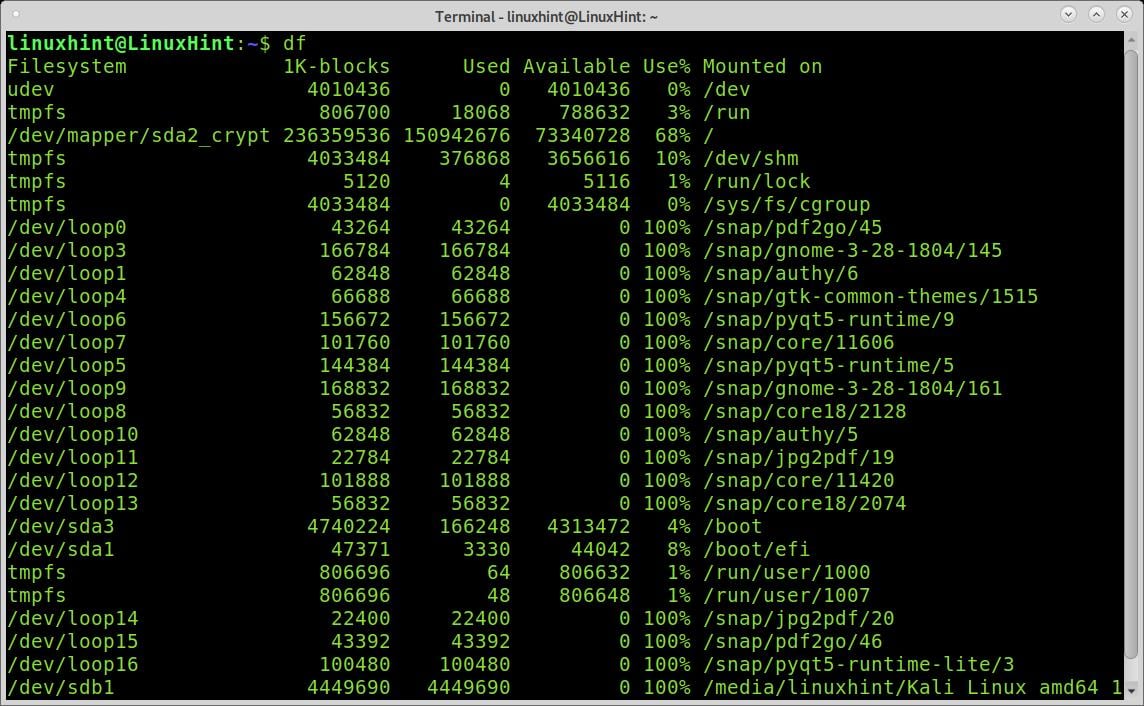 Again you can see in the last line the /dev/sdb1 storage device is mounted.

You can get more information on df at Linux Commands for Disk Space.

What happens when we mount or unmount a device in Linux?

When you unmount a device, do exactly the opposite and instruct the system to stop providing mount points for external files.

As you can see, seeing all mounts in Linux is pretty easy. Linux offers you a variety of techniques to achieve this task by just running a command. As highlighted in the tutorial, the cat method is the most accurate and less human-friendly.

Other tools like findmnt feature a little improvement in the format, making it more user-friendly. Mounting, unmounting, and checking mount points status is a basic knowledge any Linux user-level must hold. Some Unix-like Linux distributions like Slackware don’t include automount enabled by default.

Thank you for reading this tutorial explaining how to see all mounts in Linux. Keep following Linux Hint for more Linux tips and tutorials.