In this post, we will look at the deployment options for using the Kubernetes container-orchestration system to deploy containers. We will have learned how to deploy in the Kubernetes cluster in a variety of ways by the end of this article. If you really want to learn more about this topic, keep reading the article. The code can be found in the sections below.

What are Deployments in Kubernetes?

Kubernetes deployments are just ReplicaSets wrapped in a Kubernetes wrapper. Deployment monitors the number of operating pods, whereas the ReplicaSet manages the number of running pods. This allows for rolling updates, pod health checks, and easy rollback of updates.

The Deployment will only hold a single ReplicaSet during normal operations, ensuring that the number of required pods are operating.

The ability to execute rolling updates is one of the key benefits of deployment. Deployments give you a lot of flexibility over rolling updates, allowing you to update your pods’ configuration gradually.

What are the Typical Use Cases for Deployment?

Deployments are commonly used in the following scenarios:

First, you need to install the Minikube cluster and begin Ubuntu 20.04. Now open a terminal to run the commands. For this purpose, press the shortcut “Ctrl+Alt+T” on the keyboard.

You can also write the command “start minikube” in the terminal. After this, wait for a while till it starts. The following is the result of this instruction:

How to Create a Deployment?

In Kubernetes, deployments are formed by specifying their requirements in a YAML definition file. Let’s use the example of a deployment named deploy.yaml with the following parameters to see how a rolling update deployment is configured:

The whole configuration file may be found here. To bring up three Pods, the code below creates a ReplicaSet. In the example, the.metadata.name column indicates that a Deployment named nginx-deployment has been created. The Deployment produces three replicated Pods, according to the.spec.replicas attribute.

The Deployment’s.spec.selector field specifies how it determines which Pods to manage. In this case, you’ll use the Pod template to select a label (app: nginx). More complicated selection rules are possible if the Pod template fits the criteria. 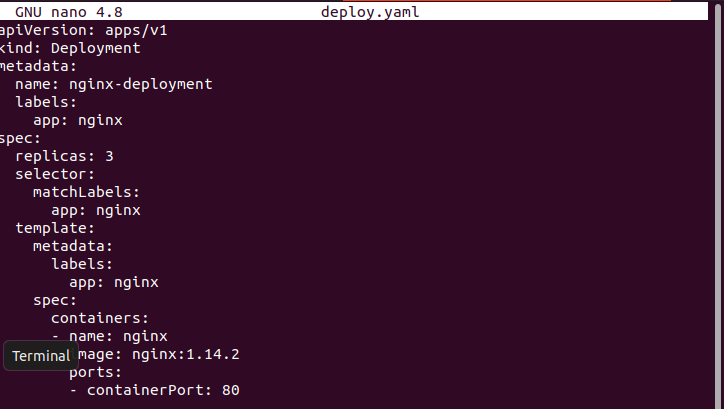 Use the kubectl get deployments command to see if the Deployment was created, as shown below.

If there are any ongoing deployments, you can monitor the rollout status by writing this command.

After a few seconds, run kubectl to get deployments again to see the details.

To inspect the ReplicaSet (rs) created by the Deployment, use the kubectl get rs command. Here is the result.

Run kubectl get pods —show-labels to see the automatically produced labels for each Pod. The output might look like this: 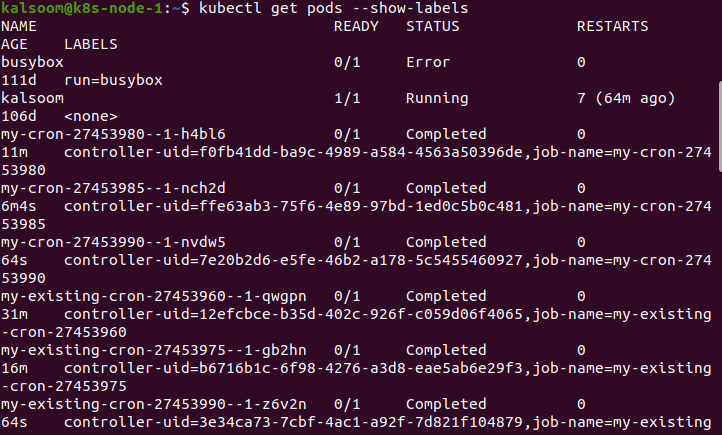 How to Update a Deployment?

To update your Deployment, follow the steps elaborated below:

Let’s change the nginx Pods to employ the following version of nginx: Instead of using the nginx:1.14.2 image, use the 1.16.1 image.

Run the given command and view the rollout status.

After the rollout is complete, use kubectl to get deployments to see the Deployment. The following is the output:

To retrieve details about your deployment, run the following command: 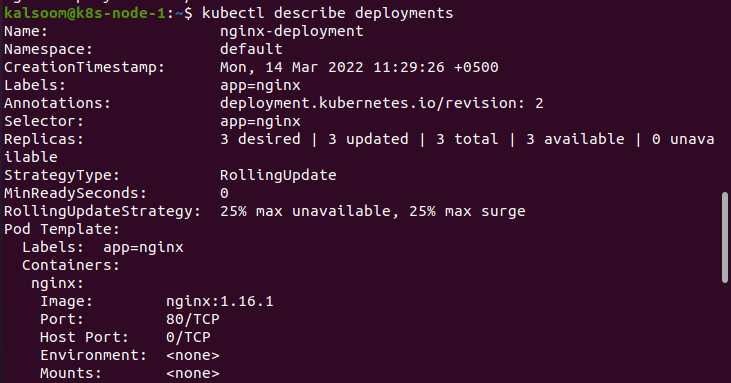 Assume you made a mistake when changing the Deployment and typed nginx:1.161 instead of nginx:1.16.1 in the image name:

The rollout becomes stalled. You can check the rollout’s performance here:

To stop the above deployment status watch, use Ctrl-C.

What are the Benefits of Rolling Updates?

Rolling updates enable progressive integration of changes, giving you more flexibility and control over your application’s lifespan. The following are some of the advantages of using rolling updates for Kubernetes clusters:

This post covered the basics of deployments, how rolling updates operate, and a variety of configuration choices for fine-tuning updates and pod scheduling. You should now be able to establish and alter deployments with confidence to achieve the correct state for your application.