According to StackOverflow’s 2020 Annual Developer Survey, PostgreSQL is the second most popular database management system available, and this is not without good reason. Since its initial release in 1996, PostgreSQL, or Postgres, has improved considerably, adding several useful features, including user-defined types, table inheritance, multi-version concurrency control, and more.

PostgreSQL is also very lightweight, easy to set up, and can be installed on several platforms, such as containers, VMs, or physical systems. Besides its default GUI, pgAdmin, Postgres also supports over 50 other IDEs, a third of which are free to use. This article will cover some of the most frequently asked questions (FAQs) about PostgreSQL.

PostgreSQL is a free product that was released under the OSI-approved PostgreSQL license. This means that there is no fee required to use PostgreSQL, even for commercial purposes, though there are some third-party extensions and services that require a subscription or one-time fee.

Yes, PostgreSQL is open-source. PostgreSQL started out as a University of Berkeley project in 1986 and was released to the public on July 8, 1996, as a free and open-source relational database management system.

Note that when you use quotes for the column or table name, such as “Amount,” the conversion does not occur. You will have to use quotes in your queries, as well, to prevent PostgreSQL from converting the queries to lowercase. You can also make column values case-insensitive using a PostgreSQL-specific keyword called CITEXT when creating columns. This keyword also allows a column declared as UNIQUE or PRIMARY KEY to be case-insensitive.

PostgreSQL was originally designed to be a relational database management system. It has since grown far beyond its original design, as PostgreSQL now supports some NoSQL capabilities, such as storing and retrieving data in JSON (JSONB), and key-value pairs (HSTORE). Unlike many NoSQL-only databases, the NoSQL capabilities of PostgreSQL are ACID-compliant and can be interfaced with SQL, like any other data type supported by PostgreSQL.

Why Should I Use PostgreSQL?

You must understand the needs of your product before choosing a database management system for that product. Usually, this choice comes down to whether to use a relational DBMS or a NoSQL database. If you are dealing with structured and predictable data with a static number of users or applications accessing the system, consider going for a relational database, such as PostgreSQL.

Besides choosing PostgreSQL because it is an RDBMS, there are several other features of this database management system that makes it one of the most popular systems available today. Some of these features include the following:

And so much more. You can see a full list of the features offered by PostgreSQL here.

PostgreSQL vs MySQL: Is PostgreSQL Better Than MySQL?

PostgreSQL also has a wider range of data types available, and it allows you to create custom data types for your database. Perhaps its greatest advantage over MySQL is PostgreSQL’s extensibility. You can create PostgreSQL extensions to suit your use case.

For the most part, PostgreSQL is a better DBMS than MySQL. But in the end, it all comes down to your use case. If you are making a simple website or web application and you only need to store data, you are better off using MySQL. But if you are dealing with more complex, high-volume operations, consider going with PostgreSQL.

PostgreSQL vs MongoDB: Is PostgreSQL Better Than MongoDB?

A comparison between PostgreSQL and MongoDB is simply a comparison between relational database management systems and NoSQL databases. And the answer of which is better boils down to your use case; how you want to use and structure your data. Each DBMS contains characteristics that are useful in different situations.

If you are building an application with an unpredictable and dynamic data structure, you will want to go for a NoSQL database like MongoDB. NoSQL database management systems are known for their schema-less databases, meaning that the database structure does not have to be defined on creation. This makes NoSQL databases very flexible and easily scalable.

PostgreSQL is a better fit if you are working with data with a fixed, static structure that changes infrequently. PostgreSQL also has the advantage of SQL, a powerful and well-established query language. Relational database management systems are more appropriate for applications that require referential integrity, such as Fintech applications.

However, neither feature works like in the original DBMS type that supports it. For example, according to this article, MongoDB still has several issues with its ACID compliance. Also, while PostgreSQL supports JSON data types and key-value pairs, this system is not schema-less. You are still required to declare the structure upon creation.

PostgreSQL: How to Connect to A Database Server

Before connecting to a database, make sure that you have downloaded and installed PostgreSQL on your operating system. Next, launch the psql application. This opens a dedicated command-line interface program for interfacing with the PostgreSQL database server.

Once the server has launched, you will be asked to fill in the following fields sequentially: server, database, port, username, and password. You can keep the default options that were set while installing PostgreSQL by hitting Enter for each query. 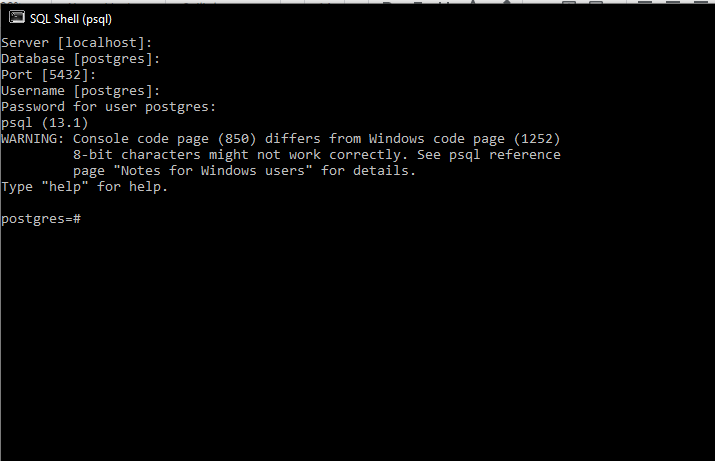 When you get to the password input field, enter the password you set during installation for the “postgres” user. Once that is done and your identity has been validated successfully, you will be connected to the database server.

Another way to connect to a database is by using pgAdmin. pgAdmin is PostgreSQL’s GUI for interfacing with its database servers. To use pgAdmin, launch the application. This should open a web application on your browser. Right-click Servers in the top-left corner of the web app, then hover over Create and select Server… from the menu that pops up. 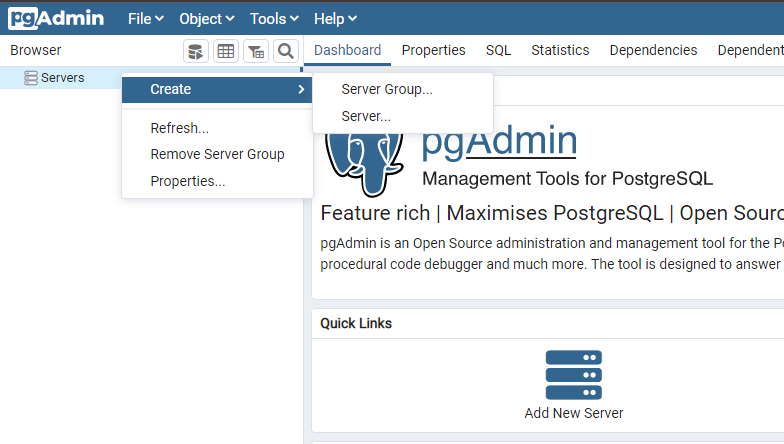 You can also click Add New Server under Quick Links. Whichever option you choose, you should now see a dialog box requesting some information. 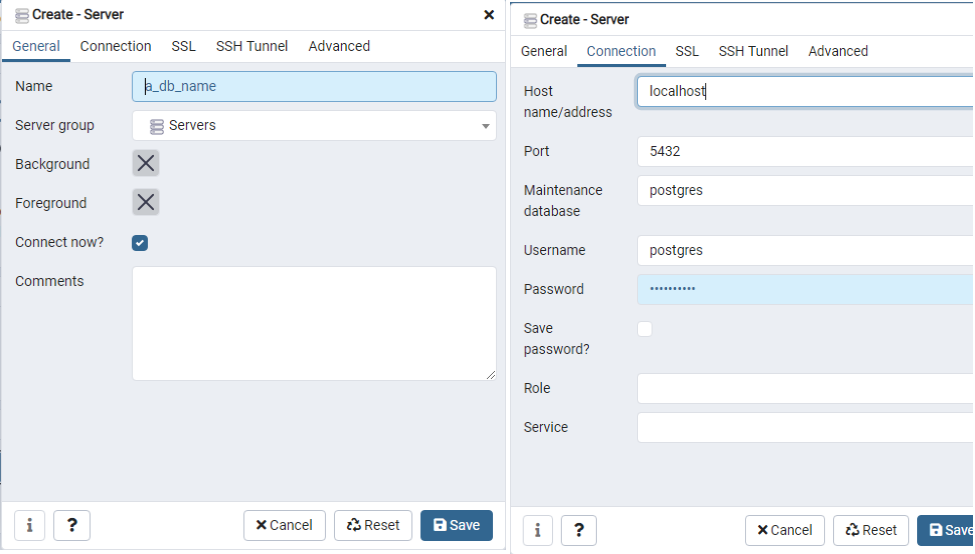 Enter a name for the server, then navigate to the Connection tab. Under the Connection tab, input “localhost” as your Host name/address, then type in the postgres user’s password that was set up during the installation. Click Save to save the server. The dialog box will close, and you will be connected to the database server automatically.

Where Are PostgreSQL Databases Stored?

On a Mac, if you installed PostgreSQL via homebrew, you will find it in /usr/local/var/postgres/data. Otherwise, it will be located in /Library/PostgreSQL/<version number>/data.

For Linux, the location varies with the Linux flavor. Sometimes, it is found in /usr/local/pgsql/data or /var/lib/postgresql/[version]/data.

To determine the location of the databases more accurately, enter the following command in psql: 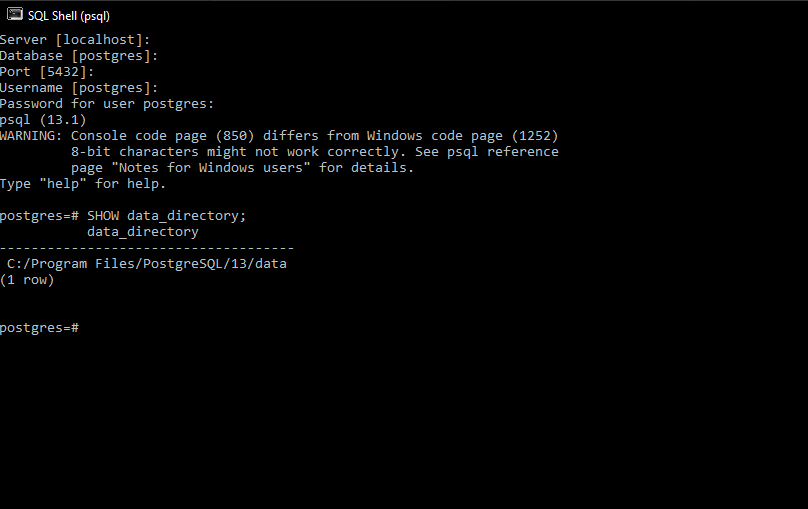 PostgreSQL: How to Start the Database Server

Starting a PostgreSQL server is slightly different for each operating system. To start the server on Windows, first, locate the directory of the database. This is usually something like “C:\Program Files\PostgreSQL\10.4\data.” Copy the directory path, as you will need it in a moment. Then, launch Command Prompt and run the following command.

The path should be the database directory path you copied. To stop the server, simply replace “start” with “stop” in the above command. You can also restart it by replacing “start with “restart”.

For macOS, if you installed PostgreSQL with homebrew, use the following commands:

To start the database server manually, run the following command:

Make sure that the directory path is that of your database.

To start the database server now and relaunch at login, run the following command:

To stop the server for both scenarios, simply replace “start” with “stop.”

In Linux, before starting a database server, you must first set a password for the postgres user. No password is set by default on installation. You can set the password with the following command:

Of course, your password can be anything you choose it to be. Once the password is set, to start the server, enter the following command in the terminal:

To stop the server, replace “start” with “stop” in the command, just like with Windows and macOS.

PostgreSQL: How to Create A Database

If you want to connect to your recently-created database, enter the following command:

You should now be connected to it. 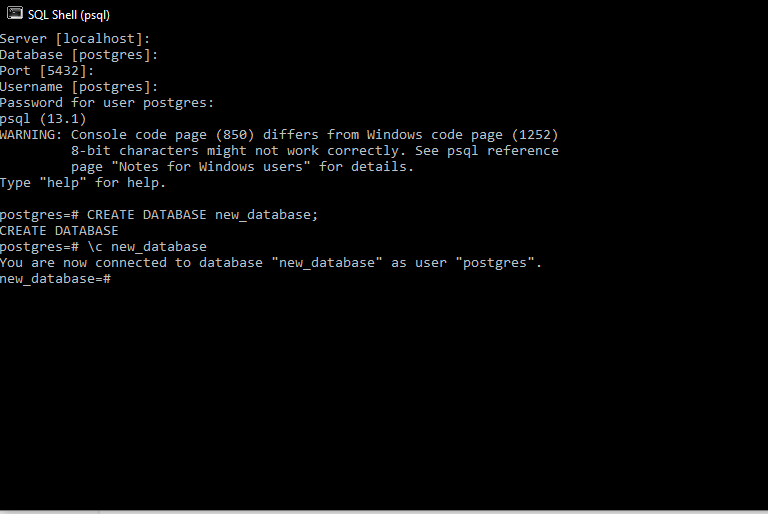 If you connected to the server via pgAdmin, on the web app, right-click on Databases, hover over Create, and select Database… 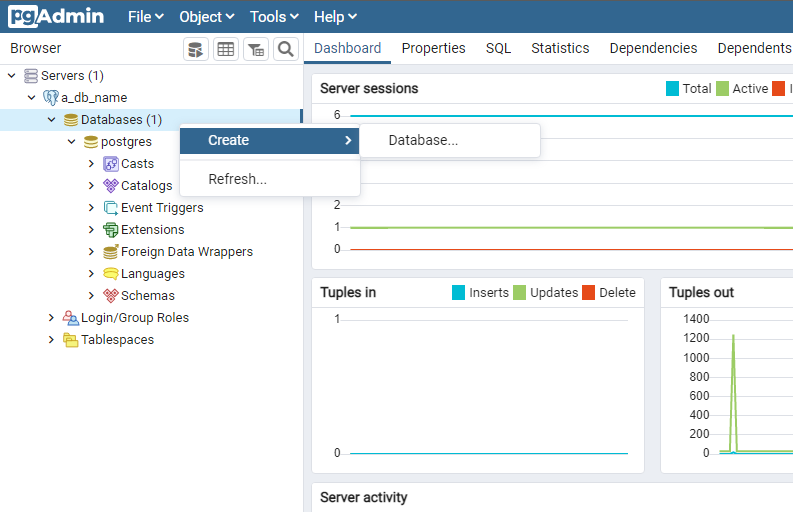 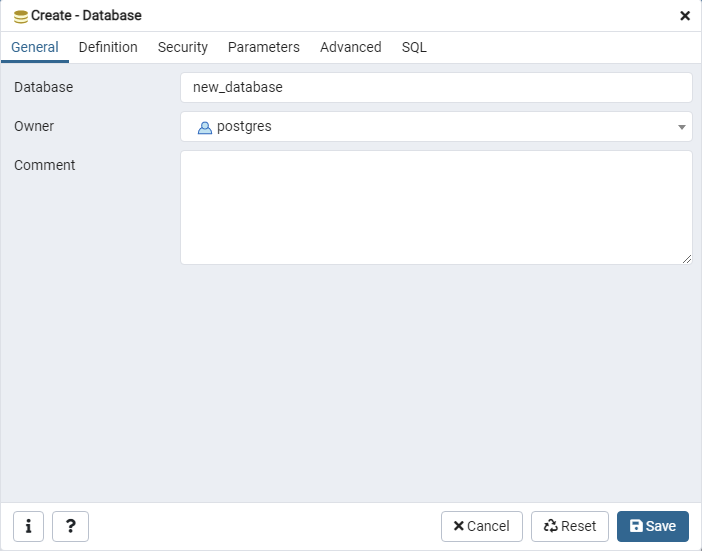 Where Are PostgreSQL Logs?

By default, PostgreSQL logs are stored in the log folder under the data folder, the default location for PostgreSQL databases. To confirm this, run the following command in psql:

Note that this command will only display a relative path, but the path should be located in the data folder. 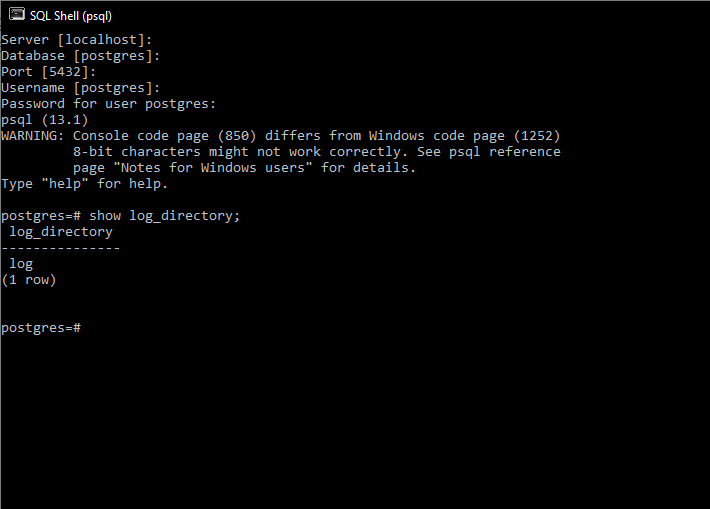 Does PostgreSQL Have Stored Procedures?

PostgreSQL has seen active development for more than 30 years, having been created in the 1980s. During this time, PostgreSQL has matured significantly, and it is currently the second most popular database management system in the world, according to StackOverflow’s 2020 Annual Developer Survey.

Two major reasons for the popularity of PostgreSQL are its extensibility and the myriad of useful features available to its users. If you are selecting a DBMS for your project, and you have decided that you prefer an RDBMS over a NoSQL database, PostgreSQL would be an excellent choice for your application.