This article is part of a series of tutorials dedicated to Nmap you can find at the bottom in “Related articles” section. This tutorial focuses on NSE (Nmap Scripting Engine) and banner grabbing techniques will be used as examples of NSE integration.

Nmap Scripting Engine (NSE) allows users to integrate scripts to the scan process to execute additional tasks. While we can get scripts from Nmap itself we can also write our own scripts. Depending on the script, tasks may be executed during or after the scan process (post scan scripts). The NSE scripts are divided into categories according to their functionalities.

Syntax:  when using scripts with our scans we need to specify –script=<scriptname>, for this tutorial I will use the following script:  –script=banner 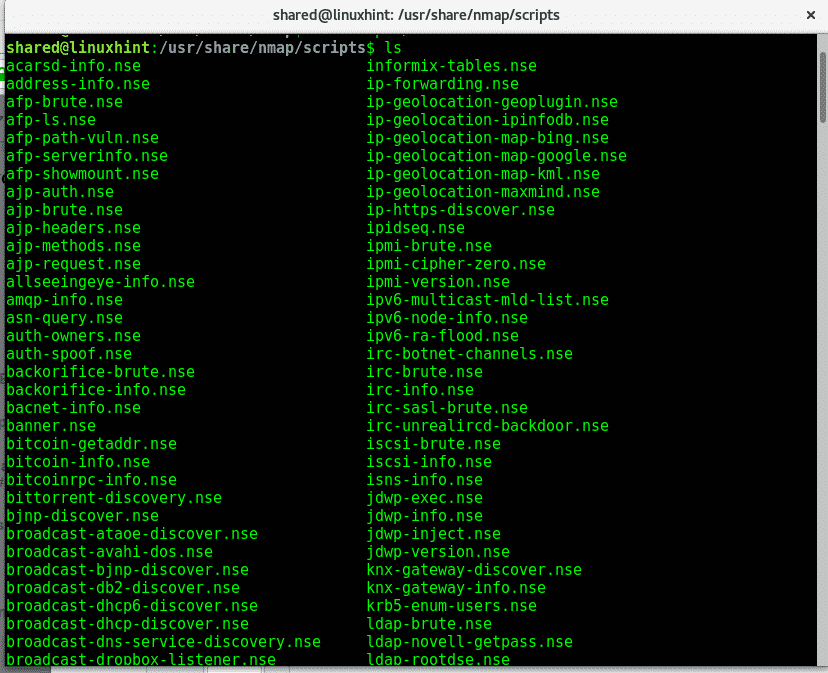 Banner grabbing mainly consists on sending requests to services in order to get responses which will allow us to learn their versions, it may be considered part of the OS and version detection process to know our target’s software and it’s possible vulnerabilities for future exploitation.  An example of basic scan using nmap would be the following: 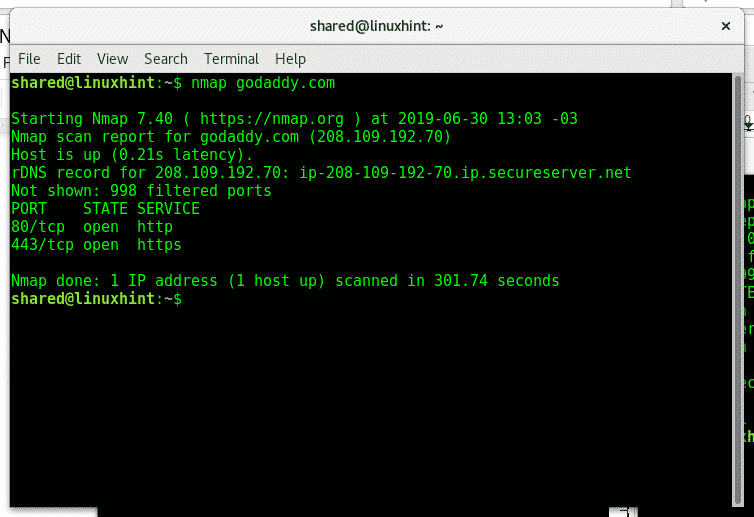 As you can see nmap informs it is a web server with ports 80 and 443 available, other ports are filtered.

Using the option -sV we can instruct nmap to check for service versions, we can define the check aggressivity defining the level from 0 to 5. While 5 is more aggressive the lighter banner grab is faster. 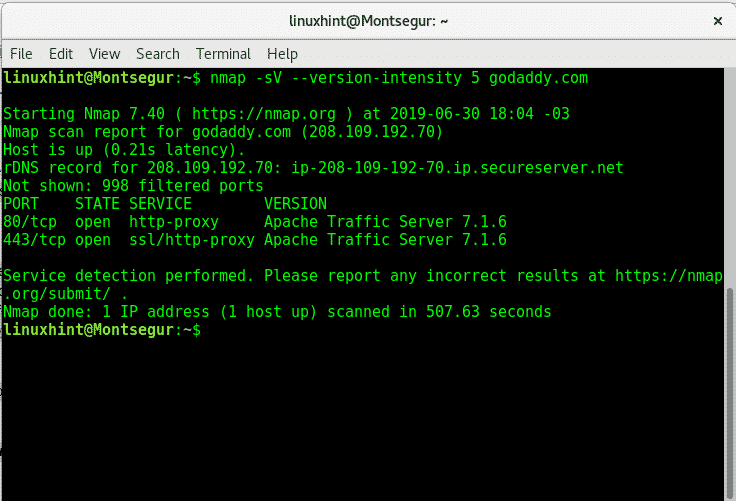 After including the -sV option nmap reveals the server is running the proxy reverse Apache Traffic Server 7.1.6. In this case Goddady kept it’s software updated, but after getting our target’s software versions we can look for exploits at databases like https://www.cvedetails.com/vulnerability-list/vendor_id-45/product_id-19990/Apache-Traffic-Server.html 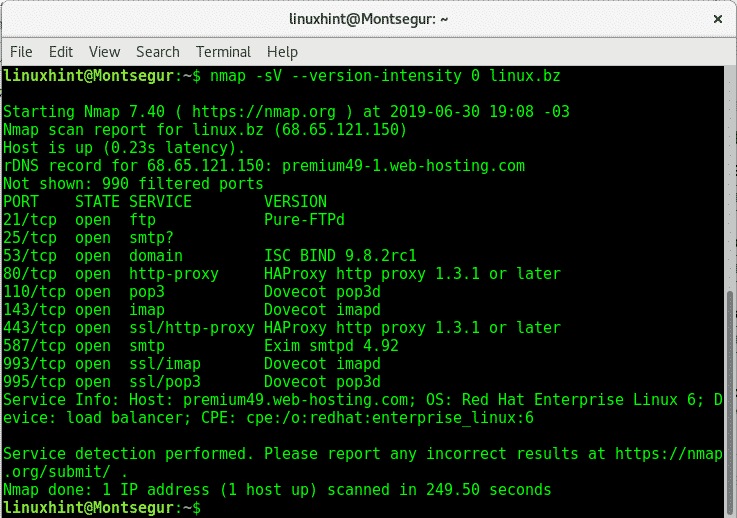 Nmap shows all available services at the server including their versions and the operating system Red Hat Enterprise Linux.

Now let’s incorporate the banner script from the NSE suite: 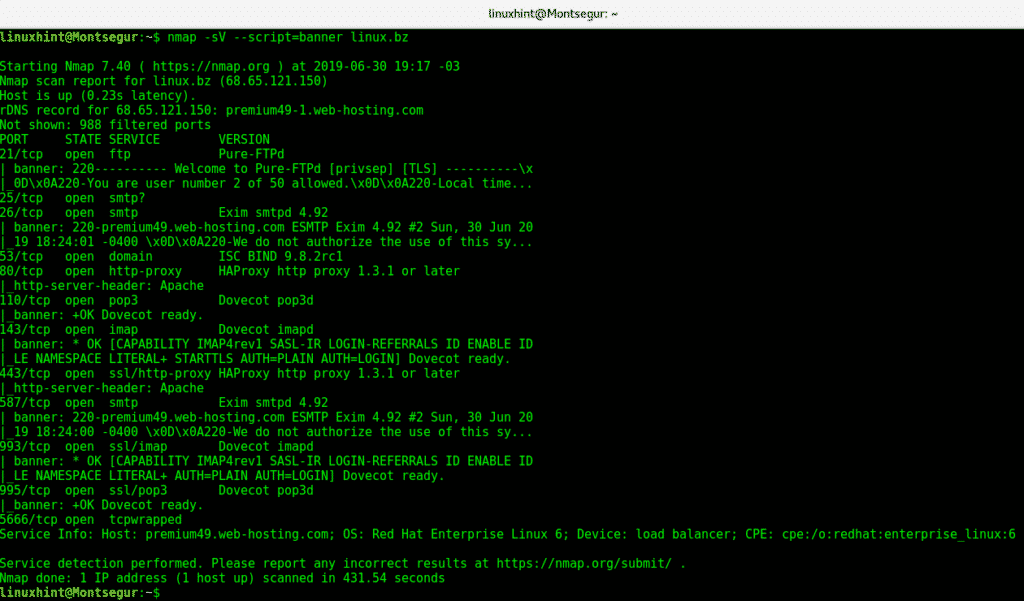 Where:
nmap: calls the program
-sV: Version detection.
–script=: instructs nmap to incorporate a NSE script.
banner: After “–script=” we define the script, in this case banner. 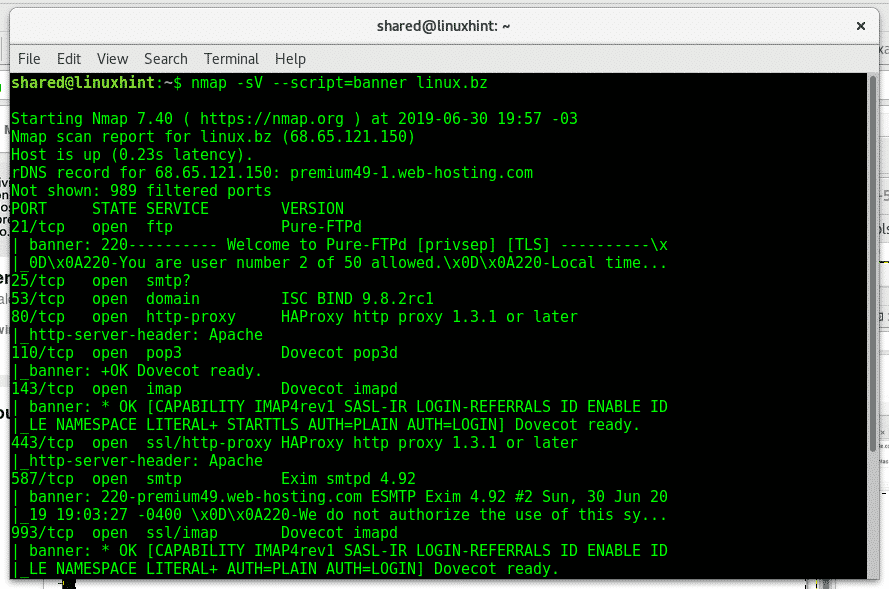 Additional information provided by the banner scripts include from authentication to protocol reports.

In the following sample I will scan the port 21 of linux.bz trying to get information on the FTP server using the banner script:

Where:
nmap: calls the program
-p 21: specifies the port 21 only.
-sV:  version detection
–script=: instructs nmap to incorporate a NSE script.
banner: After “–script=” we define the script, in this case banner.

The output reveals the server is using Pure-FTP, it even reveals the maximum allowed limit of users (up to 50).

Banner grabbing is a formidable way for sysadmins to gather information on their devices and running software. It may be helpful to detect vulnerable versions of specific software or services to patch or update. It’s main obstacle is the time the scan process may take. NSE banner script by default takes 5 seconds per port. This technique would be optimized if the user specifies nmap what ports to audit.

I hope you found this tutorial helpful as introduction to nmap NSE and nmap grabbing techniques. Keep following LinuxHint for more updates and tips on Linux. Before any inquiry on Linux or networking don’t hesitate to contact us through our support channel https://support.linuxhint.com.