Unarchiving refers to the decompression of files that are in the .zip, tar, and tar.gz format. It is the process via which files are restored from an existing archive. This archive may be present locally on your system or on a remote server.

Archiving has its advantages, the biggest of them being ease of portability. It allows you to group files of different types and compress them into a single portable .zip/tar file which can be decompressed to retrieve the original files later on.

Ansible also provides archive options with the help of the ansible.builtin.unarchive module. This module has the unzip options available, along with some options that allow it to copy files before extracting them.

That being said, let’s begin.

Prerequisites of Unarchive in Ansible

Following are the requirements for the Ansible Unarchive module to work properly on your system.

We’d also recommend that you have some basic know-how of how to execute commands in the Terminal.

Limitations of Unarchive in Ansible

While the Unarchive Module works well with .tar, and .zip files, it cannot be used with files of the type .gz, .bz2, .xz files. Files must contain a .tar archive for the module to work. For files that use gtar, make sure that the –diff argument is supported.

The next section of this guide will cover the parameters of the Unarchive Module.

Parameters of the Ansible Unarchive Module

The Ansible Unarchive Module has its own list of parameters that extend the functionality of the overall module.

The next section of this guide will go over some examples on how to use unarchive in Ansible.

Using Unarchive for Extracting a File into a Given Directory

The following example illustrates how you can extract a .tgz file (named archive.tgz) into a given path.

Now, execute this command in the Linux terminal for running a playbook.

“src” denotes the file that is to be extracted whereas “dest:” is used to specify the path.

We shall see more examples to understand how to use the Unarchive Module better.

Unarchive a File Available on the Remote Host

The following example illustrates how you can extract a file that’s already present on the remote host or machine.

The aforementioned code will extract the file archive.zip in /usr/local/bin.

Using the Unarchive Module to Extract a File that’s Online

This was a feature that was added in Ansible version 2.0. It allows you to extract a file that’s available online that hasn’t been downloaded yet on the system.

The following example illustrates how you can achieve this.

- name: Extract a file that hasn’t been downloaded yet on your system
ansible.builtin.unarchive:
src: https:///.zip
dest: /usr/local/bin
remote_src: yes

The aforementioned block of code will extract the file into the destination path /usr/local/bin.

The Difference in Playbook Code with and Without Unarchive

The following example is meant to help you see the difference between code that makes use of the Unarchive Command Module.

We start by taking a look at how to write the code to copy and unarchive files. We’ll be using the Copy Module along with the tar -xvf command for extraction. 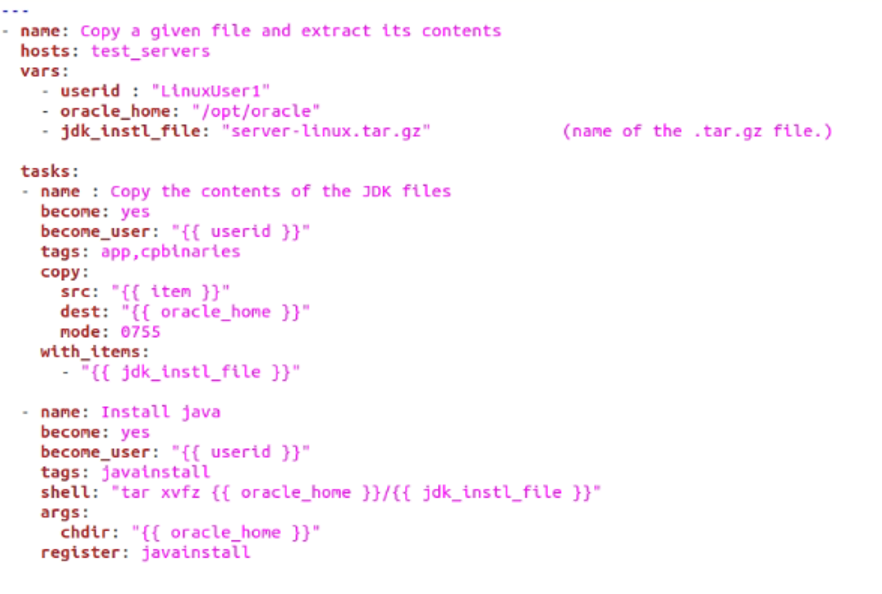 The same tasks can be achieved in a much simpler manner using the Unarchive Module as shown below. 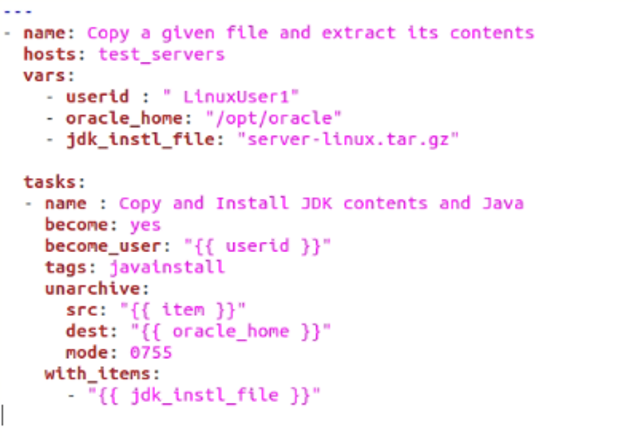 We hope this guide helped you learn how you can use the Unarchive module in Ansible. We covered the basics of the module along with limitations, prerequisites, and parameters. We also went over some examples to better our understanding. With this, we wish you all the best in learning how to use Ansible.