This tutorial explains what Linux kill signals are and how to use them to interrupt, terminate, suspend and continue processes.

What is Linux kill signals?

Kill signals allow interaction between different processes. Concretely signals are event notifications sent to processes mostly to interrupt, terminate, kill or suspend processes (That’s why we use the term “kill”). Signals can be sent by processes or by the kernel, and normally they are sent when an anomaly or exceptional condition requires special processing, or when a user interrupts or terminates a process manually (e.g., when pressing Ctrl+C),

When a signal is sent to a process, that signal, or notification, may meet a default action as a response or may be handled by a signal handler. A signal handler is a custom code of the program whose process received the signal, which defines the behavior of the process when the signal is received (except for signals SIGKILL and SIGSTOP, which can’t be handled, ignored, nor blocked).

When the signal is sent, the default actions which may take place are the following:

Depending on the signal some of these actions may take place, the program also can contain a signal handler to execute the proper action.

Summarized: signals are messages delivered to processes notifying them an event occurred.

To list all signal names and numbers on your system, you can use the kill command followed by the -l flag, as shown below.

As you can see, there are 64 signals, probably the most known by all of us is the number 9 (SIGKILL) used to terminate processes including child processes, immediately.

How to use kill signals:

The correct syntax to send signals is:

You can replace ir with the names or numbers we got previously when running the kill -l command. The PID is the process ID you can learn by using the ps command as shown in the following instructions.

To begin the practical section of this tutorial, let’s try the SIGSTOP and SIGCONT to pause a process and then resume it.
For the first example, I created a little code-named linuxhintsignal that continuously prints “linuxhint.com” as shown in the screenshot below. 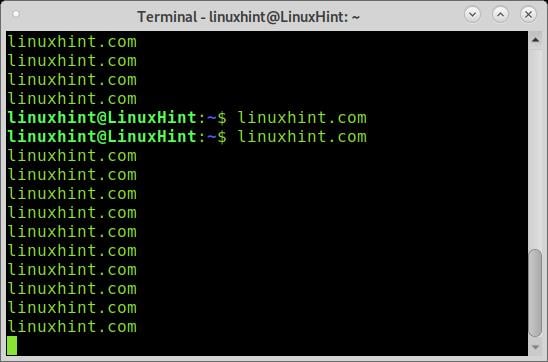 To send a signal to the process, before I need to learn its PID. To see the Process ID (PID) you need to run the ps command. In my case, I’m the one who executed the process, so I use the ps command followed by the -u flag to show my processes only.

As you can see, the PID of the running linuxhintsignal script is 16182.

The following screenshot shows two terminals; the right terminal shows the delivery of the SIGSTOP signal to process 16182. The left terminal shows how the process is stopped when I send the signal.

As you can see on the right terminal, the process was stopped properly.

You need to send the SIGCONT signal to resume the process execution, as shown in the screenshots below.

As you can see, the process resumed.

You can achieve the same result by replacing the signal names for their numbers. The following example repeats the previous scenario, but this time is defining signals by their numbers.

The following example also shows how the SIGKILL is delivered to process 17721 to pause it. This time instead of specifying the signal name, I specify the signal number returned by the kill -l command, in this case, 19 for the SIGSTOP signal.

The following screenshot shows how to specify the SIGCONT signal, also using its number instead of its name.

As you can see, the result is the same when using the signal name or number.

As said previously, the SIGKILL signal is used to terminate a process fully; it is probably the most used signal by users.

As you can see in the example below, in which SIGKILL is implemented with its number (9), the script was fully terminated or killed.

Using Linux signals to kill, stop, pause processes, among other functions, is a basic knowledge any Linux user must hold. Deep knowledge of signals is especially relevant for programmers who must ensure that signal handlers don’t produce unwanted effects on the system. As you can see, there are dozens of available signals; this tutorial only focused on the most common ones. You can get more information on Linux signals at https://www.gnu.org/software/libc/manual/html_node/Standard-Signals.html.

Thank you for reading Linux Hint; keep following us for more Linux tips and tutorials.