MongoDB is an open source NoSQL database server. At the time of this writing, the latest version of MongoDB is v4.2.
In this article, I am going to show you how to install MongoDB 4.2 on Ubuntu 18.04 LTS and how to do basic MongoDB configuration. So, let’s get started.

First, add the GPG key of the official MongoDB package repository on your Ubuntu machine with the following command:

The GPG key should be added.

Now, add the official MongoDB package repository on your Ubuntu machine with the following command:

Now, you can install the latest stable version of MongoDB (v4.2) with the following command:

The APT package manager will download and install all the required packages. It will take a while to complete.

At this point, MongoDB should be installed.

Now, check whether MongoDB is installed correctly as follows:

As you can see, both the client and server binary of MongoDB is v4.2.0. So, MongoDB v4.2 is working just fine. 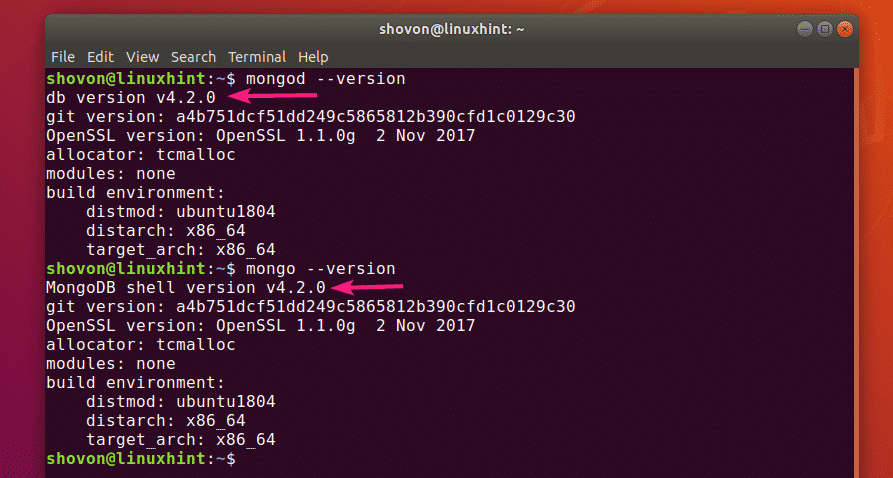 Now, you can check whether MongoDB is running with the following command:

As you can see, MongoDB is not running. It’s also disabled (not added to the system startup). So, it won’t start automatically on boot as well.

You can start MongoDB with the following command:

Also, if you want MongoDB to start automatically on system boot, then add mongod service to the system startup with the following command:

The mongod service should be added to the system startup.

Now, if you check the status of the mongod service again, it should be running. It should also be enabled.

If you change MongoDB configuration files, then you should always restart MongoDB for the changes to take effect. You can easily restart MongoDB with the following command:

If you need to stop MongoDB for certain reason (i.e. taking database backup), then you can stop MongoDB with the following command:

Once MongoDB is stopped, you can start it again with the following command:

The default configuration of MongoDB looks as follows: 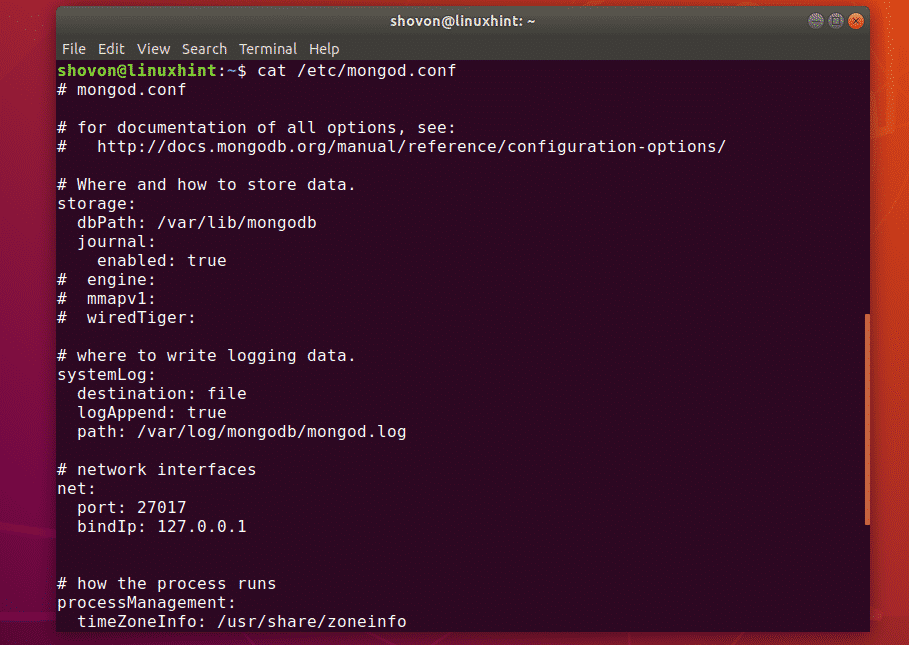 You can change the owner and group of your desired data directory to mongodb with the following command:

By default, MongoDB listens on the port 27017 and it binds itself with localhost/127.0.0.1. So, MongoDB won’t be accessible from other computers on the network.

If you want MongoDB to listen to another port than 27017 for security reason, or some other purpose, then, you have to change the port parameter from the net section of the MongoDB configuration file /etc/mongod.conf.

If you want to access MongoDB from another computer on your network, then, change the bindIp parameter to the IP address of the desired network interface of your Ubuntu machine.

If you have multiple network interface card installed and you want MongoDB to accept connections from all of them, then you can either use 0.0.0.0 to allow access to every IP addresses available on your computer, or separate the IP addresses using comma (,).

For example, you have 2 network interfaces with the configured IP addresses 192.168.10.5 and 192.168.20.5, then, to allow connections to the MongoDB server from both of these networks, the bindIp parameter can be written as follows:

To access the MongoDB server, you can use the mongo client program.

To access MongoDB server from the same computer where you’ve installed MongoDB, all you have to do is run the mongo client program as follows:

To access MongoDB server remotely, you have to pass in an additional –host parameter as follows:

You should be connected.

Now, you can run any MongoDB commands in the MongoDB shell.

Once you’re done, you can exit out of the MongoDB shell as follows:

So, that’s how you install and configure MongoDB on Ubuntu 18.04 LTS. Thanks for reading this article.