Hyper terminal is built with web technologies such as HTML, CSS, JavaScript, Electron.js etc. It looks very modern and has lots of customization options. In this article, I am going to show you how to install Hyper terminal on CentOS 8. So, let’s get started. 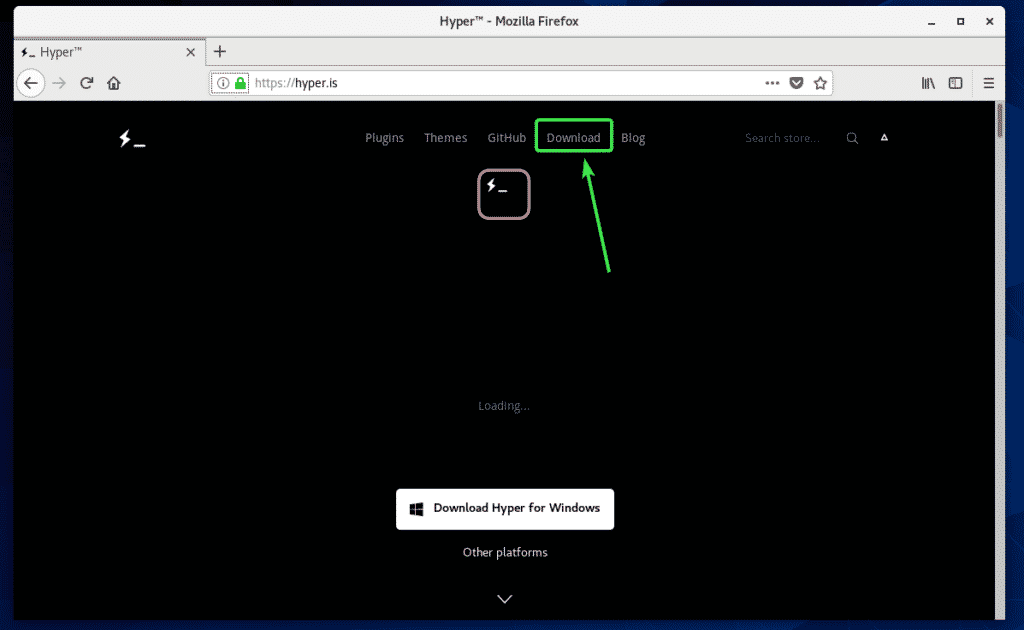 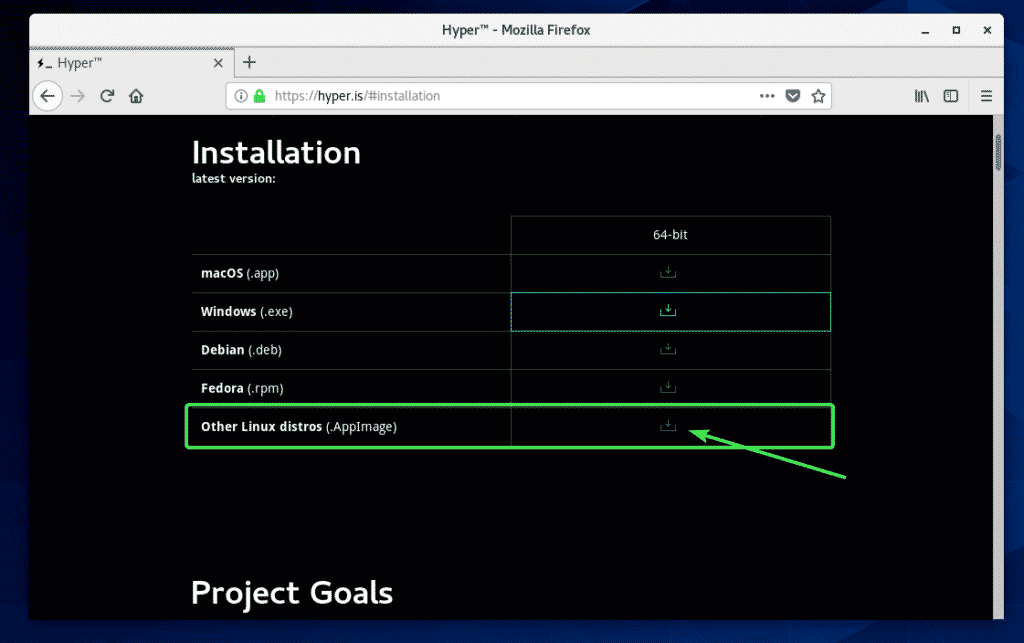 Your browser should prompt you to save the Hyper AppImage file. Click on Save File. 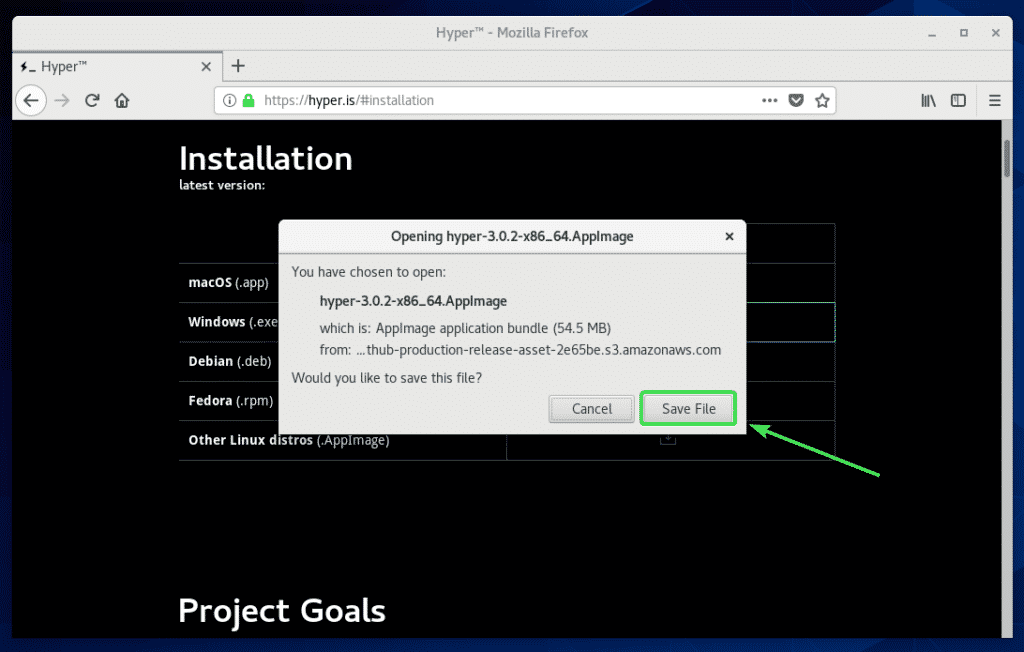 Your browser should start downloading Hyper AppImage file. It may take a while to complete. 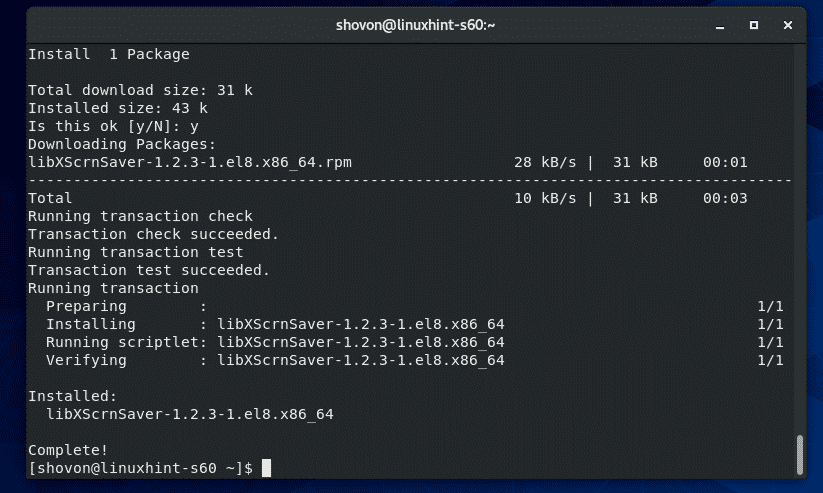 Once Hyper AppImage is downloaded and libXScrnSaver is installed, navigate to the ~/Downloads directory as follows:

Now, you have to move the Hyper AppImage file to somewhere safe. So, you won’t accidentally delete it.

I’ve decided to put the Hyper AppImage file in ~/.local/apps/ directory in this article. It should be a safe enough directory.

First, create the directory ~/.local/apps/ with the following command:

Now, move the Hyper AppImage to the newly create directory ~/.local/apps/ with the following command:

The Hyper AppImage file should be moved to the newly created directory.

On first run, it will ask you whether you want to create a desktop shortcut for easily accessing Hyper terminal later. Click on Yes. 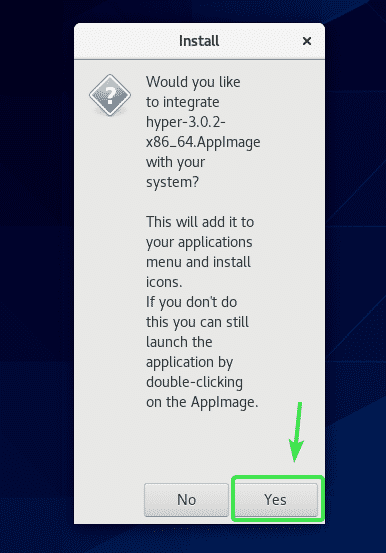 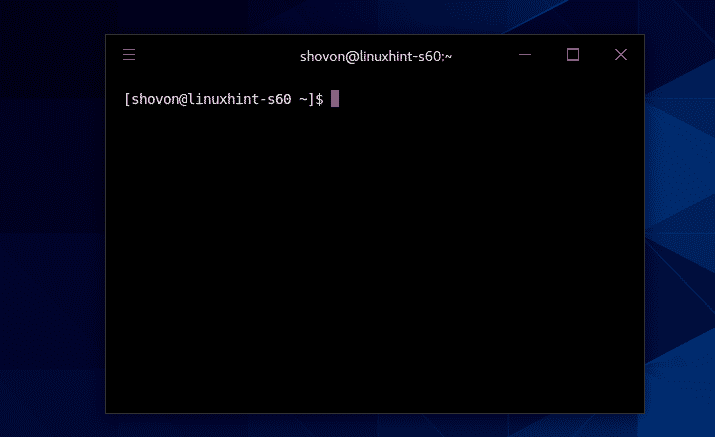 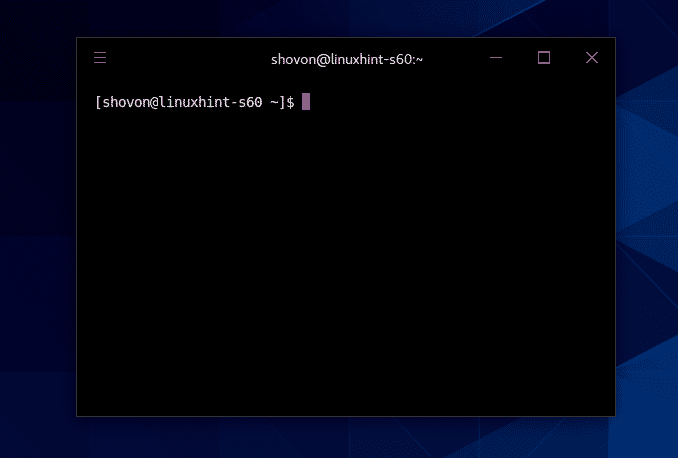 You can run any command you like on Hyper terminal as you usually do in other terminal apps. No difference there.

The configuration file of Hyper terminal is in the path ~/.hyper.js 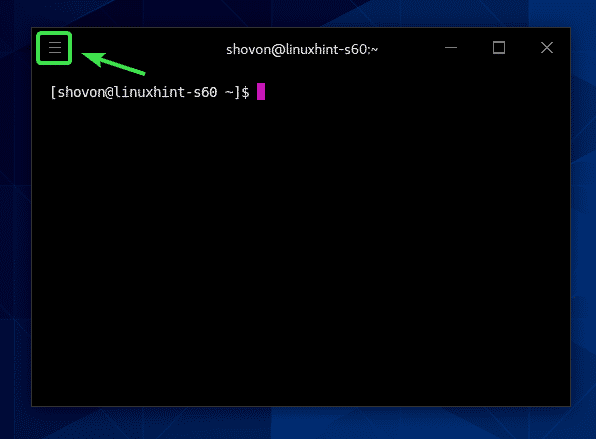 Then, go to Edit > Preferences… 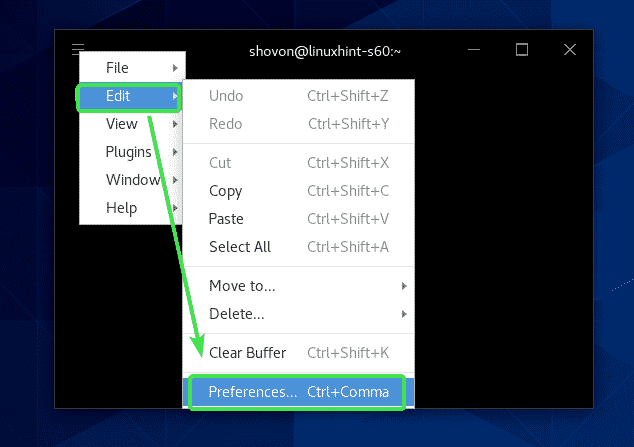 Hyper configuration file ~/.hyper.js should be opened with your default text editor. It is a nicely formatted JSON file. It is very self-explanatory. You should be able to configure it very easily.

But if you need any assistance configuring Hyper terminal, please check the article How to Install and Use Hyper Terminal on Ubuntu 18.04 LTS at LinuxHint.com. 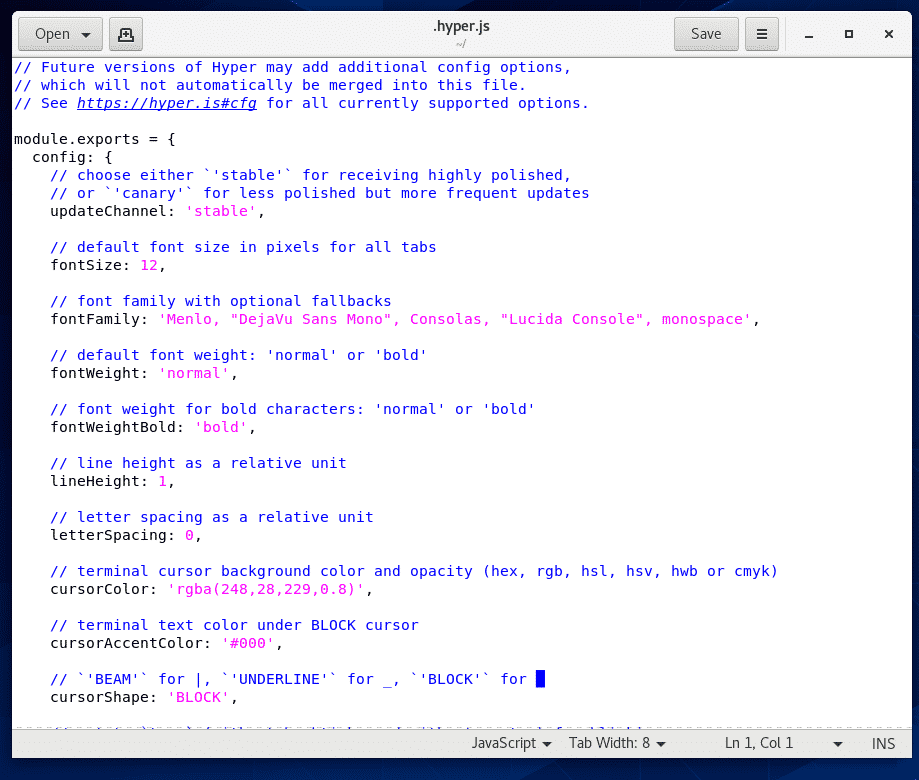 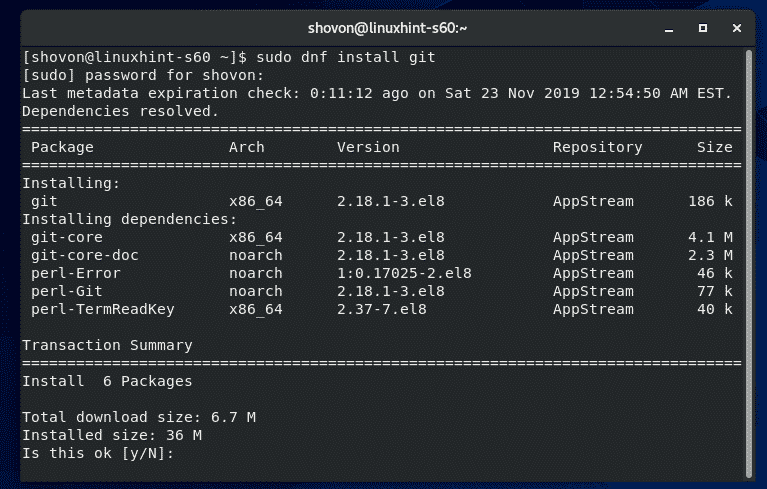 Now, navigate to the local plugins directory of Hyper terminal as follows:

The Rainglow Git repository should be cloned.

A new directory rainglow/ should be created. 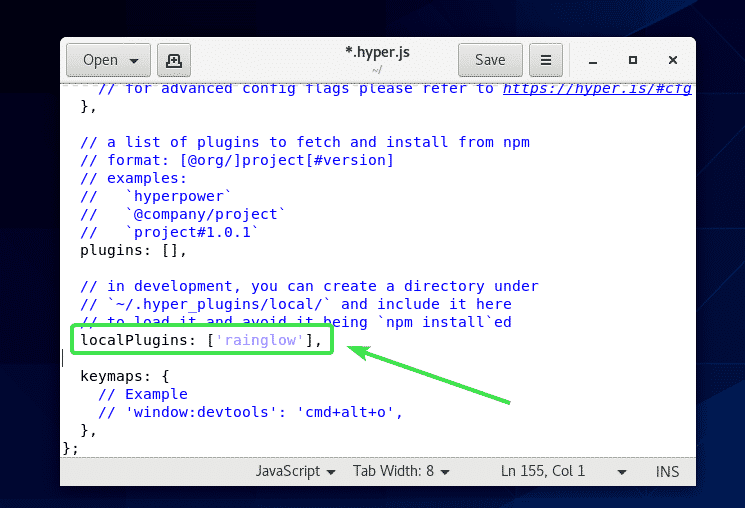 Now, go to the top of the configuration file and after the updateChannel property, add a new property rainglow.

The format of the rainglow property: 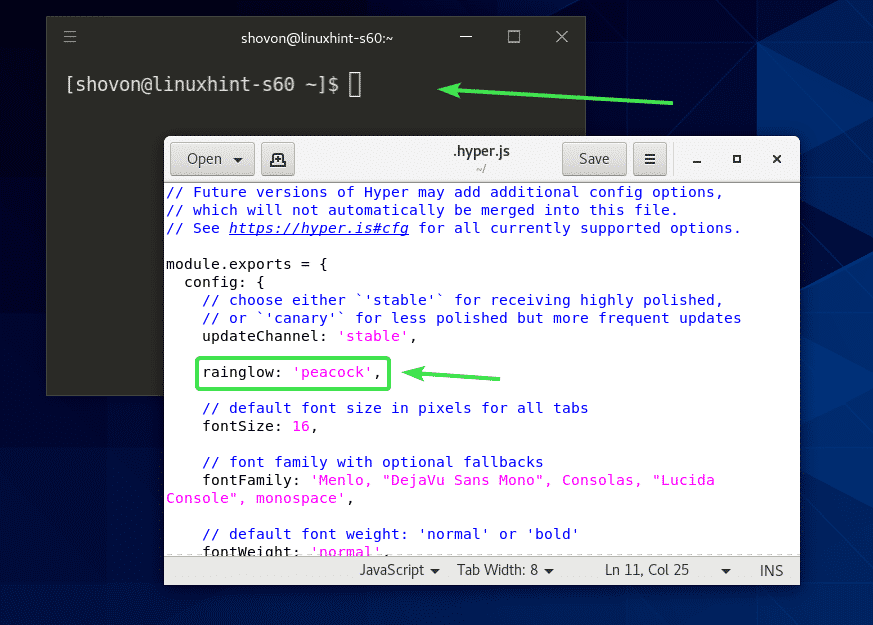 All the themes are saved in the ~/.hyper_plugins/local/rainglow/colors directory as you can see in the screenshot below. 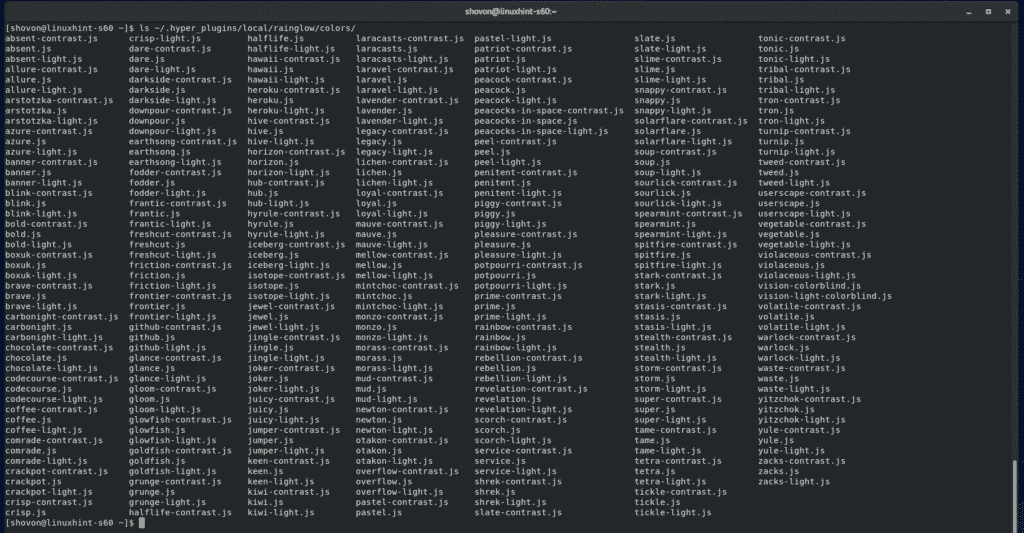 You can go to the official Rainglow Preview website to find out how each theme looks like. Every Rainglow theme has 3 variants,

I went to the Rainglow Preview website and I really liked the Earthsong theme. Let’s set this theme on Hyper terminal. 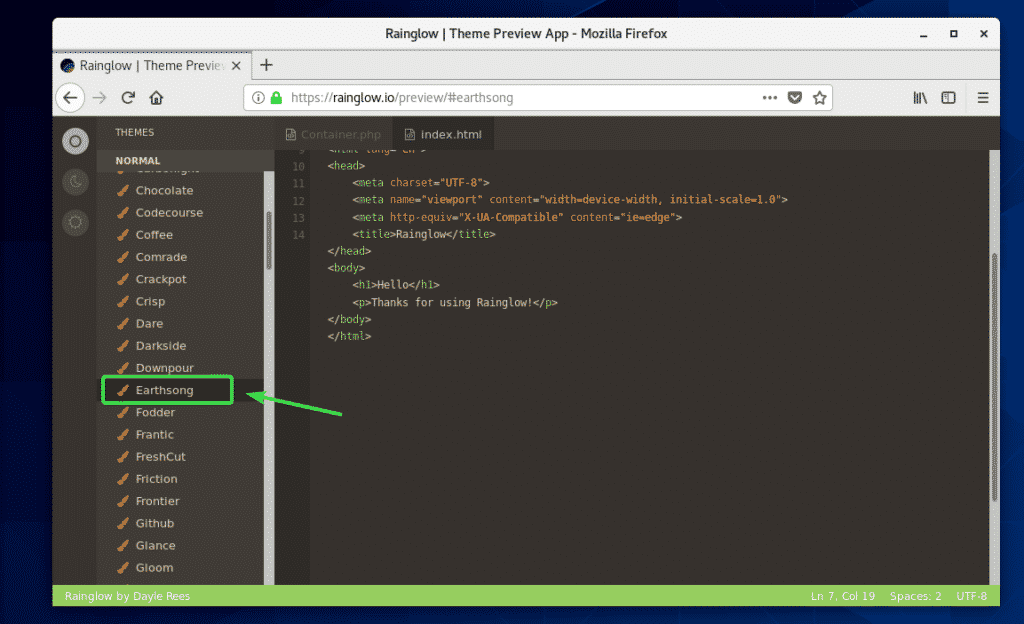 You can find the theme file name (in my case Earthsong) using grep as follows:

As you can see, the theme I picked has 3 files earthsong-contrast.js (Contrast variant), earthsong.js (Normal variant) and earthsong-light.js (Light variant).

To set the earthsong.js theme file on Hyper terminal, set the rainglow parameter to earthsong (without the .js extension) as you can see in the screenshot below.

So, that’s how you install Hyper terminal on CentOS 8. Thanks for reading this article.