Google Chrome is one of the top web browsers. In fact, Chrome has been the top browser for all the platforms for quite a long time now! Thanks to its superior performance, it can easily outpace other competitors like Firefox or IE. Moreover, people find Chrome to be better in terms of user experience.

Google Chrome is available for all the major platforms. If you’re an openSUSE user, then you’re lucky! Google offers their most popular web browser in the RPM package. As of the package manager, Zypper is more than enough for the job.

Without further ado, let’s get started!

Note: All the steps demonstrated in this article were performed on openSUSE Tumbleweed. However, they’ll work similarly on openSUSE Leap.

The following method is the recommended way of installing Google Chrome as it’ll enable auto-update of Chrome directly from Google.

The first step is adding the Google Chrome repo. Fire up a terminal and run the following command.

In the command, “ar” stands for “addrepo”. To learn more about Zypper and its usage, check out how to use Zypper on openSUSE.

The repo isn’t ready to use yet. We need to add the Google public signing key so that the packages can be verified. Run these commands.

Once importing the key is complete, update the repo cache of zypper.

Finally, zypper is ready to grab Google Chrome from the repo! 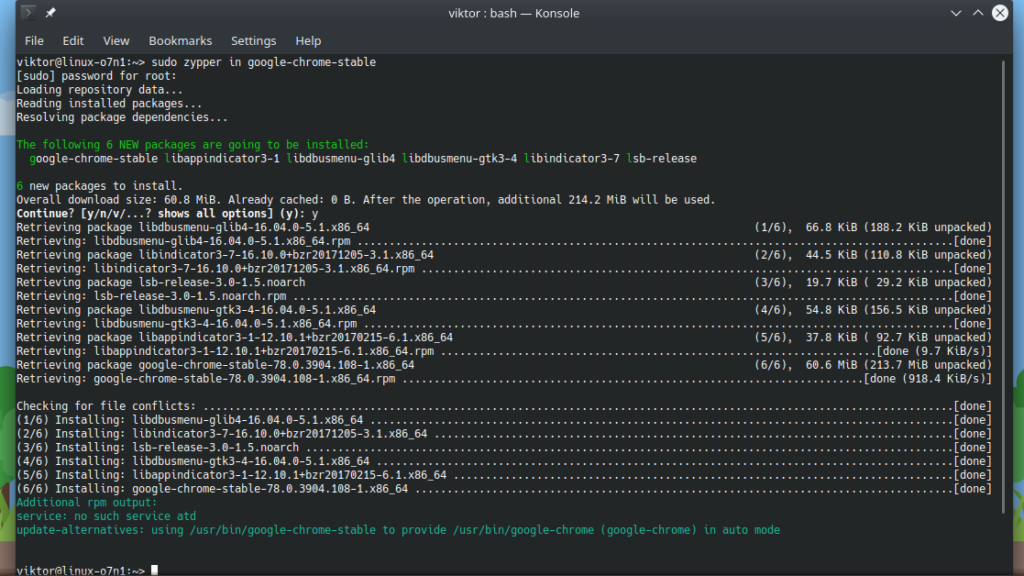 If you’re looking for other Google Chrome builds like beta or unstable, run the following command(s).

It’s possible to have all three of the builds coexist on the same system. If you’re interested, feel free to do your own experiment! 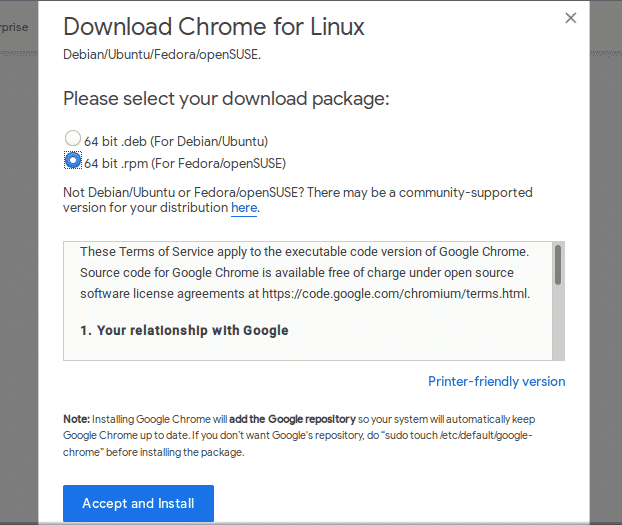 Once the download is complete, fire up the terminal and run the following commands.

If you’re running Linux, you definitely have heard the name of Chromium browser, right? Chrome and Chromium are very similar but at the same time, different.

So, what’s the difference?

Chrome features all the features Chromium offers. The biggest difference would be the list of features. Chrome gets some proprietary, closed-source features like automatic updates, additional video format (AAC, H.264, and MP3) support, extension restriction etc.

Now, which one to choose?

While you’re free to choose whichever you want, I strongly recommend going with Chromium for various reasons, especially for “terms of service” and privacy concerns. For average users, the Chromium browser should suffice more than enough. Thanks to its open-source nature and flexible licensing, you can enjoy more freedom. Google Chrome, on the other hand, has some negativity surrounding its “terms of service” and potential privacy concerns.

With that out of the way, let’s get started with the Chromium browser!

Be it Google Chrome or Chromium, you’re guaranteed to unlock the maximum potential web performance that your hardware and internet can handle.

Stay safe on the web and enjoy!