Redis is a popular and open-source in-memory key-value or data structure store that is used as a distributed database, message broker, and cache. Redis supports data structures, such as Lists, Strings, and Sets, and it is widely recognized due to its broad support, performance, availability, and flexibility. This article shows you how to install and configure Redis on the CentOS 8 operating system.

Redis is available in the official repository of CentOS 8 and can be installed quite easily as such. There are no significant obstacles to overcome during the installation process. Simply follow the procedure given below to install Redis on your CentOS 8 system.

After updating the repository cache, upgrade the system’s packages, as well, by entering the command given below:

Now, the system is up-to-date and ready to install Redis. To install Redis on CentOS 8 using the DNF package manager, issue the following command: 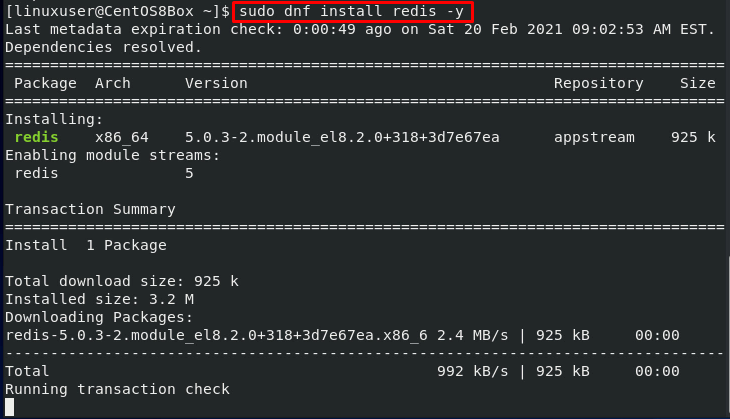 And that is it; version 5.0.3 of Redis is now installed on the CentOS 8 operating system. Next, we will configure Redis on CentOS 8.

To configure Redis on CentOS 8, first, the Redis service must be running on the CentOS 8 system.

First, check the status of Redis service by issuing the command given below:

If Redis is inactive, then start the service by entering the following command:

Redis may not be enabled on system startup. Enable the Redis service on boot by entering the command given below:

After successfully starting the Redis service, you can confirm that the service is active by pinging it using the Redis CLI command-line tool.

If Redis responds with the output “PONG,” this means that the Redis service is running perfectly fine. Now, we can configure the Redis server.

In this configuration file, to bind Redis to another private IP address, find the line starting with bind, uncomment the line if it is commented, and provide the IP address in place of ‘127.0.0.1.’ 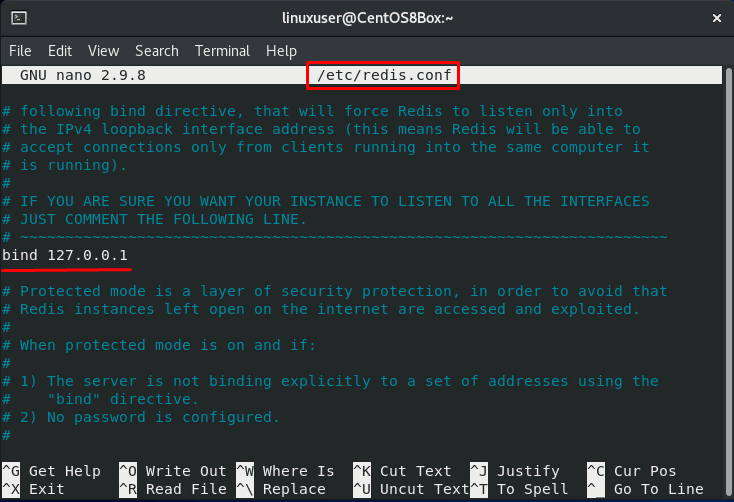 After completing the configuration, restart the Redis service. Otherwise, the changes will not be applied.

Now, we will configure the firewall to allow traffic from port 6379.

Now, add the private IP address that you want to allow to pass through the firewall.

That is it. The firewall is configured.