With the help of Linux, India has made an operating system known as “Garuda Linux”. GarudaOS is new in the world of Linux Distributions contains advanced and enhanced features with outstanding performance. 17 cities are connected in this project; tech companies like C-DAC (Center for Development of Advanced Computing), IITs (Indians Institutes of Technology), and 45 other institutes are the project participants.

To install GarudaOS, some prerequisites must be kept in mind for better experience:

Well, installing any Arch-based operating system could be time-consuming. Still, some operating systems, including Garuda, are pretty simple to install; you can get it on your system within a few clicks. That’s maybe because of Calamares, which is a user-friendly software installer.

The one who has no idea about the Linux system can also install Garuda operating system easily.

In the GarudaOS, the users get interesting editions and polished themes that make the system different from other Linux distributions. No matter what Garuda edition you’re using, every edition comes with several themes.

GarudaOS system gives the user tons of desktop environments options which are designed very impressively. The list of all available choices are mentioned below:

I think that’s really good; when the users get bored using the same environment, they can change the appearance by installing any other desktop environment.

The Garuda Arch-based system’s key feature is that it has a Btrfs file system by default, one of the modern file systems. Other distributions have this feature as an option.

There are many benefits of the btrfs file system, such as it helps to prevent data loss and take snapshots automatically that are directly accessible from the grub, snapshot creates a copy of the shared folder without affecting the original performance. It helps to back up the data regularly. Moreover, it specifies the storage limit for the folders and includes many other prominent benefits.

GarudaOS is optimized explicitly for gaming purposes; it has various game applications such as steam and emulators. It is impressive for the people who love to play games on the Linux system, giving an optimized gaming experience.

Garuda Gamer allows you to install many interesting game applications, like launching EmulationStation, Steam, Gamer World, Wine, and many other similar add-ons. 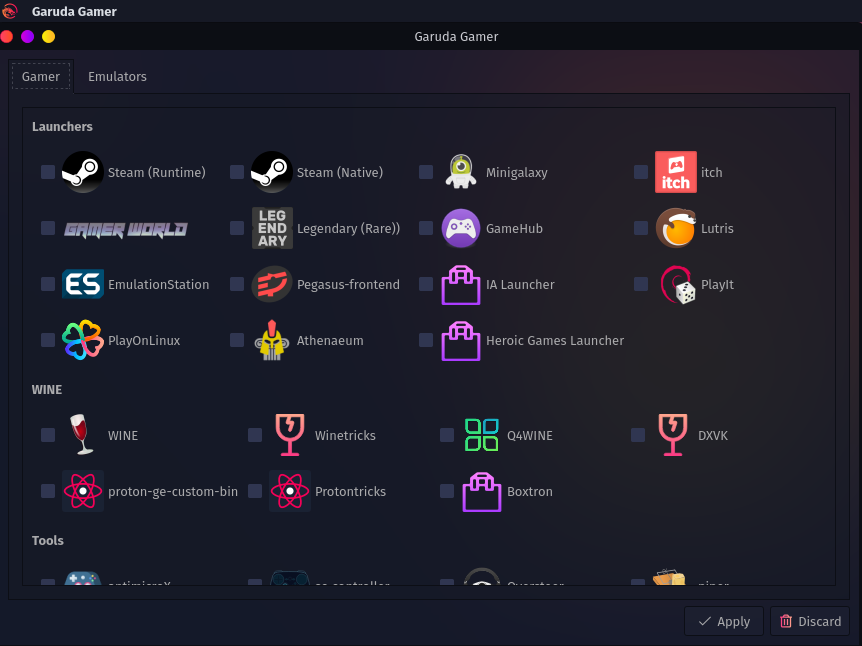 Garuda Gamer not only allows you to install or launch your favorite PC games but also comes with a range of Emulators such as Dolphin-Emu, PPSSPP, mGBA, and Citra: 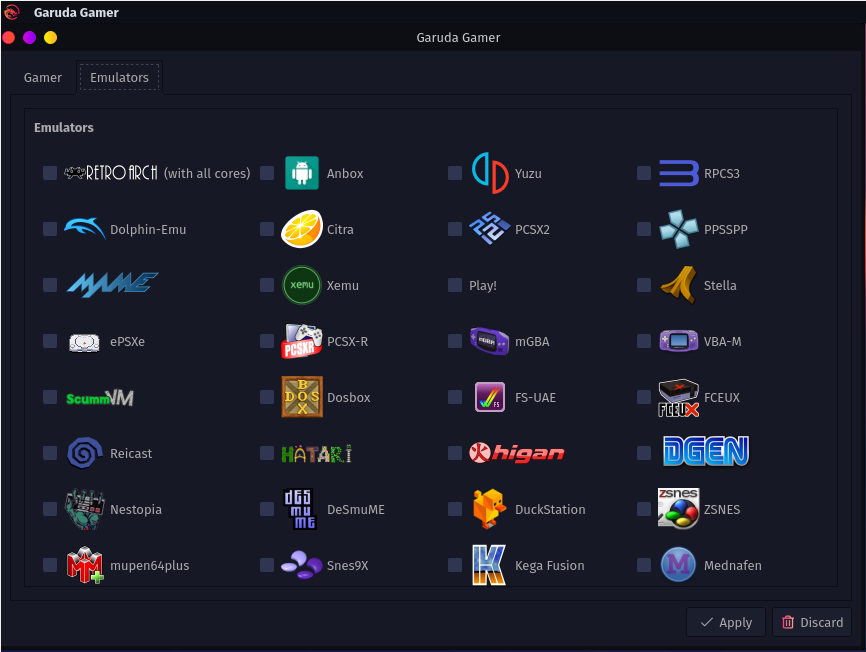 Although every system has a settings manager to control and manage the overall operating system, the notable feature of GarudaOS is Garuda Assistant, which is the GUI tool to perform several tasks. For example, just in one click, you can perform operations like system updating, refreshing mirror list, removing database lock, clearing database logs, clearing packages cache, etc.

You can use Garuda Assistant graphical tool as an alternative to the terminal. Just do what you want to perform with a simple process. 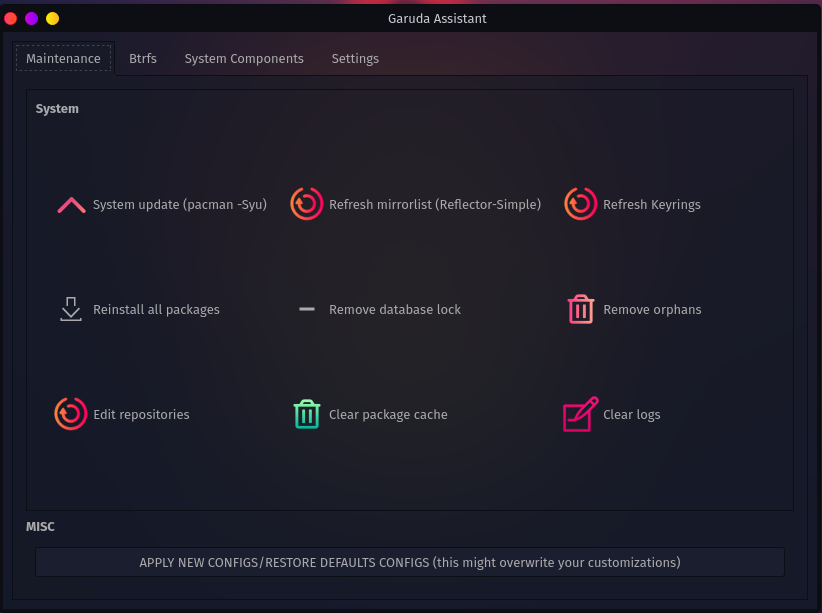 Like EndeavourOS and Manjaro, the GarudaOS also has a Pacman management tool to manage all the software packages. Not only this, you can install, delete, update, and make other modifications using the Pacman Graphical management tool.

Also, Pacman supports Arch User Repository (AUR) by default which is a community-driven repository. Not only this, but users also have the choice to enable snap and flatpak management tools.

Let’s move towards “Garuda Network Assistant”; this allows you to configure ethernet, wireless network, and other internet-related options. Also, have an “Airplane mode” option, you can create a hotspot, yet all the networking material is controlled by here. 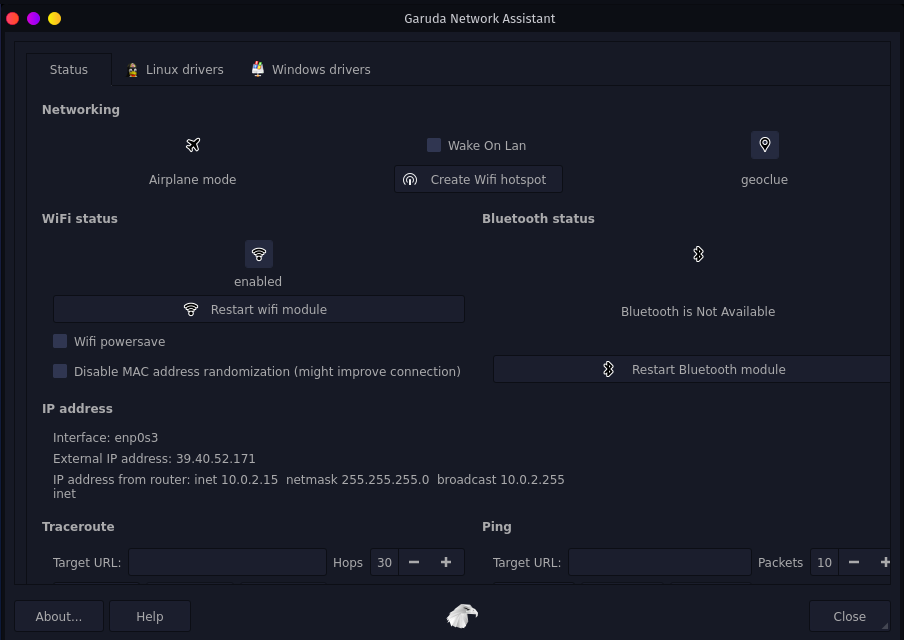 It is “Konsole” in the Garuda Linux system, an amazing console interface you can see in the image below. This is unique compared to other operating system consoles, a colorful and one of the best terminals you will be amazed to see. 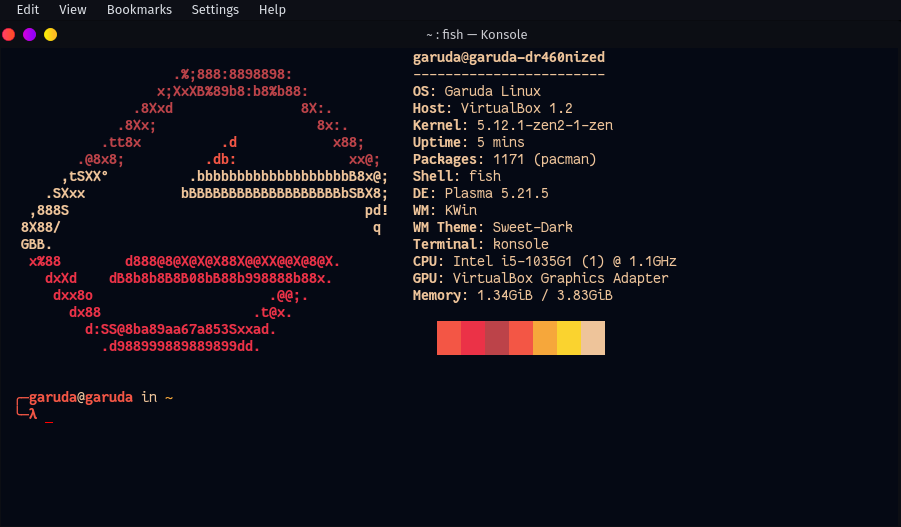 GarudaOS is one of the most popular, user-friendly Arch-based Linux distributions designed by Indian’s Grid Computer. All the IT-based institutes of India with 17 cities are connected to this project. GarudaOS is new to the Linux world and got famous because of its exciting and advanced features.

GarudaOS comes with a beautiful and customizable look and offered nine unique desktop environments. An interesting thing about this Arch-based system is it has a Btrfs file system that helps in protecting data and implement snapshots automatically. There are many other benefits of the Btrfs file system, which we mentioned above.

For game lovers, a ton of fantastic games and emulators are available in the system. Other helpful additions for beginners are Garuda setting manager, assistant manager, and networking manager to run administrative tasks.

Well, in my opinion, it is good to experience the Garuda Arch-based Linux distribution because it has unique, minimalist style icons, an attractive appearance, and the support of many user-friendly desktop environments.