Many times such situations come in Linux where we have to deal with application unresponsiveness or sluggish applications due to CPU usage. This happens when our Linux system CPU is very busy. Most of the time, it has to wait until the CPU is free and queue up to process its pending requests.

Whenever the CPU is completely occupied by the processes of the Linux system, it becomes difficult for the CPU to process other requests. All remaining requests have to be stopped until the CPU is freed. This becomes a huge obstacle.

We have to use the appropriate command to know the processes which are affecting the CPU. In this article, we will tell how we can solve CPU-related problems with the help of the following commands, as well as see how to find those processes which are using most CPU Linux.

We have many such ways with the help of which we can see the use of CPU in Linux processes.

Everyone uses the top command to monitor Linux systems because it is good and well-known. By top command, the system provides a dynamic overview of the cpu usage. Top command frequently produces an updated list of top command processes. This command shows us how the CPU is using memory and processing power as well as gives information about other running processes.

The top command displays a list of tasks currently managed by the Linux kernel, as well as a complete system summary. This command monitors memory usage, process statistics and CPU usage. 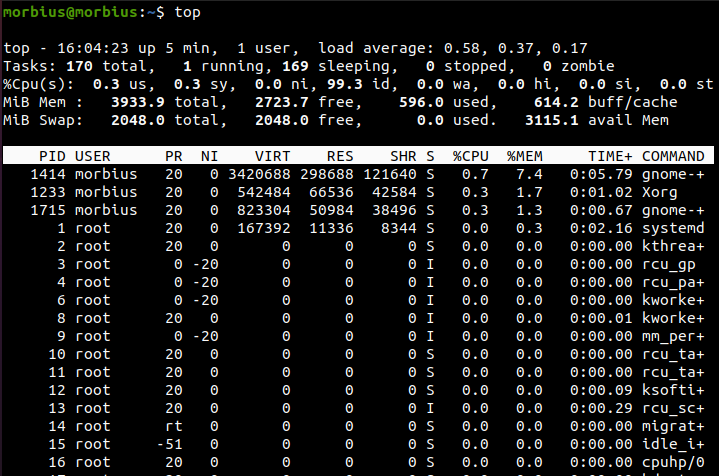 This list may change frequently but you can press the Q button to stop the refresh process. We can start apex using the -i switch.

It hides all inactive processes to make it easier to sort the list. Use the following commands:

By default, this command sorts the top output with CPU usage by updating the top command data every 5 seconds.

For the purpose of further analysis, it is best to have a clear view of top’s output after running it in batch mode. Using the top command, you can find out what the CPU statistics are for Linux.

Top command performs well on multiple CPUs and in true SMP environments, the top number of CPUs. To exit from the top command display, we have to type the q key.

The htop command is also similar to the top command, but one of its features is that it allows us to scroll horizontally and vertically and much more. 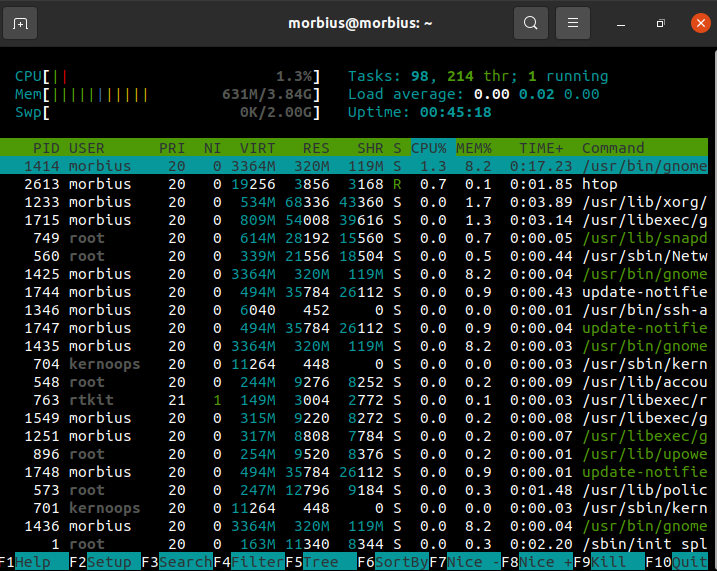 With sar command, you can view today’s CPU activity as a utility for managing system resources.

The -u option allows you to track CPU performance, but it is not limited exclusively to CPU usage.

You can print the standard output by the sar command on selected cumulative activity counters in the OS. It gives output based on interval and calculation parameters. For example, 2 seconds apart; 5 times, use:

Display CPU usage with the –u option. Whenever it displays, it should do so every five seconds. You can cancel this by pressing Ctrl-C.

Here, U12 5 displays the following values of CPU usage.

The output file has to be set for multiple reports and multiple samples to get the report from the Sar command. Run this command as a background process.

Even after logging out, if we want to see the report back, then we can better use the nohup command.

This file contains binary copies of all the data contained in the file. Using the -f option, you can display this data with the sar command.

This command is used to find the average usage of the system since the last reboot. By using the iostat command, we report the partitions, devices and data of the CPU (Central Processing Unit). 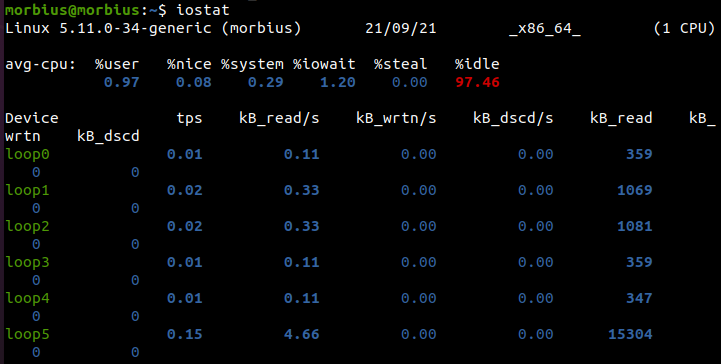 If we use the command given below, we will get 3 outputs every 5 seconds. 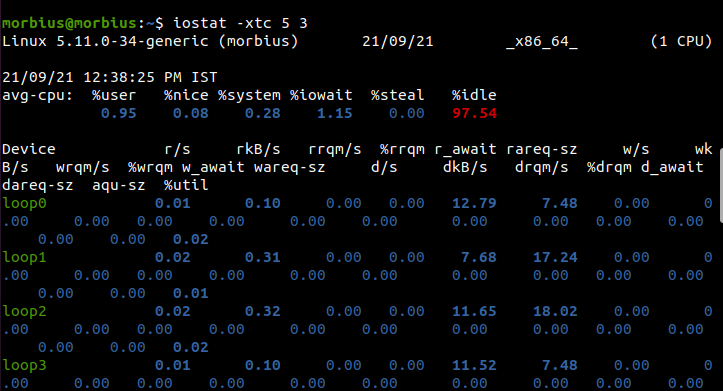 With vmstat, you can check CPU, disk, IO, memory, traps, processes, and more. This command goes something like this.

The percentages represent the time spent on each CPU core.

There are different keys for different options as you can see in the image given below: 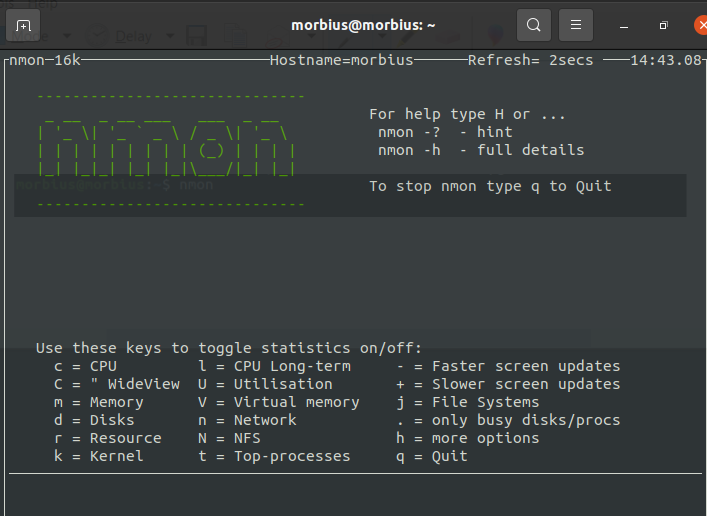 You can press the Q button to exit the tool.

To utilize these features we must first install a systat package. Default tools and system performance tools such as RHEL / Red Hat Linux are included in this package for Linux. We can install it on Ubuntu or Debian by the following command:

To install sysstat for different versions of Linux, we have to use the command according to them.

By using mpstat, display the use of each CPU individually. If we use multiple CPU and SMP systems, then we use mpstat command to display the usage of different CPUs. This command provides us with the report of statistics related to the processor.

Process 0 is the first available processor, and mpstat displays activity for each one. The mpstat command is used on both UP and SMP machines, but the latter will print only the global average of activities.

GUI tools to Find Process Using Most CPU in Linux

The above tool/command is very useful for remote servers. We can try gnome-system-monitor with X GUI for local systems. It lets us monitor and control the system’s processes. Through this, we can terminate processes, send signals, and access memory maps.

Additionally, gnome-system-monitor shows us an overall view of resource usage on our system including CPU and memory allocation. 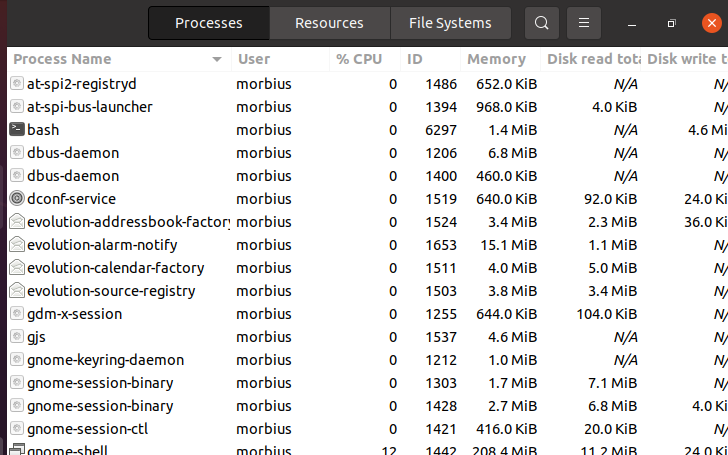 In this article we have given information about many Linux command line tools. Through all these commands, we can see how we can find out the maximum usage of CPU and stop it. Through this, we can stop its usage and move forward the second processing of CPUs.