Cinnamon is one of the top-tier desktop environments for Linux. It’s a free and open-source desktop environment derived from GNOME 3 with a strict compliance to the traditional “desktop” metaphor. Generally, Cinnamon desktop was the unique feature of Linux Mint. However, because of its popularity, Cinnamon is now available on all the major Linux distros.

In the case of openSUSE, Cinnamon is on the list of officially supported desktop environments alongside GNOME, KDE, LXDE, MATE, and Xfce etc. Let’s check out how to install and use Cinnamon desktop on openSUSE.

There are plenty of desktop environments out there. Which one is the right one for you? You can only know after you’ve tried all of them. In the case of Cinnamon, there are some features that make it interesting.

No matter whatever you say, the look of your desktop can have a noticeable impact on your experience. Thankfully, Cinnamon offers a crisp, clean look. It implements suitable color combinations and easy-to-read fonts. The screen is free from unnecessary clutters and bloats.

Don’t like the look? Cinnamon is highly customizable. Give it whatever look you’d prefer.

Unlike other shiny desktop environments, Cinnamon is fast and snappy. The desktop itself loads fast.

As of resource consumption, Cinnamon can be described as mid-weight desktop. It consumes moderate amount of RAM and CPU performance. Depending on your hardware, there’s likely to be negligible performance impact because of Cinnamon.

In the case of stability, Cinnamon works very well. It just “works”. While it’s hard to obtain a solid statistics on the stability, from my personal experience, it doesn’t break unless something stupid is done.

That being said, Cinnamon is fairly simple and “fool-proof”, so expect a rock-solid stable experience.

If you’re going to install Cinnamon, it requires following a slightly different procedure. There are 2 ways to go through.

YaST offers a nice UI to work with that’s well organized to understand and navigate. To hire YaST to do the installation, at first, go to this openSUSE Wiki page.

I’m running openSUSE Leap 15.0. Select the appropriate version according to the OS of your system. Download the YMP file. 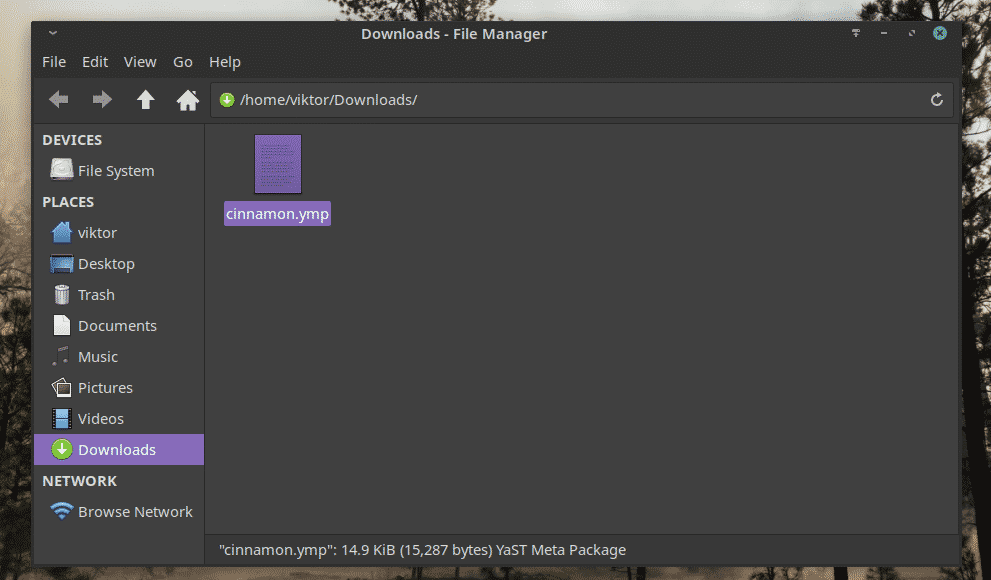 Once downloaded, fire up the file manager, locate the YMP file and double-click on it. It should load the “YaST 1-Click Install” tool.

The tool will show a short report of what changes will occur if you perform the installation. Generally, there’s no need to do anything. Click “Next”.

Note: If you’re sure what you’re doing, you can change the installation by clicking the “Customize” button.

A warning message will prompt. Click “Yes” to perform the changes.

Enter the root password to grant root privilege to YaST.

When prompted with the following warning, click “Trust”. This will import the GPG key for the Cinnamon repository.

Now, wait until it finishes checking up the repos and packages.

You may or may not face such issue but if warning like this pops up, just select the “downgrade” option for all the packages that pops up in the warning window.

This step is going to take the most time. YaST2 will be downloading and installing all the packages.

Some packages may not be installed. If you’re sure that you need them, you can manually install them later. For now, Click “Finish” to complete the Cinnamon installation.

To switch to Cinnamon desktop, log out of current session.

From the screen, select “Cinnamon” from the “Desktop Session” menu. In the case of GNOME, the option will appear as a gear icon.

Voila! Cinnamon is the desktop environment!

This step is more suitable for openSUSE Tumbleweed. However, the similar step will also apply for openSUSE Leap. The only differences are the commands that are to be run.

At first, we have to add the Cinnamon repo for openSUSE. Run the following command(s) according to the openSUSE type your system is running. In the case of Tumbleweed, we don’t need to add any specific repo.

Once the installation is complete, log out of the current session, change the desktop environment to Cinnamon and voila!

Cinnamon is a fork of GNOME 3. However, it completely changes in a manner that GNOME never was. Since the introduction of GNOME 3, it got a lot of heat from the community and Cinnamon seems to go down the right way.

Personally, I’m a fan of Cinnamon over GNOME because how it implements the “desktop” in a better manner. Cinnamon is nothing like the GNOME 3 now. Cinnamon offers a better look and works better than GNOME in lots of scenarios.

Well, that’s not to say that you may not like GNOME! In the case of selecting a desktop environment, experimentation is the best way to find out the right match for you.